PUBLIC HOUSING. As early as the 1810s, visitors to Cleveland commented on the wretched housing conditions. After the CIVIL WAR, as thousands of European immigrants were attracted to the growing city by opportunities for work, Cleveland's slums grew along with its population. There is no evidence that 19th century city administrations addressed housing problems; even reform mayor TOM L. JOHNSON paid the question little attention. MALL designers gave no thought to housing the hundreds of persons displaced for stately civic buildings. A 1904 CLEVELAND CHAMBER OF COMMERCE investigation that concluded poor housing caused a whole litany of social and moral evils spurred passage of the city's first comprehensive building code. This code followed the pattern already established by experts such as Lawrence Veiller, who opposed municipally built housing as socialistic. Codes, however, did not house people. 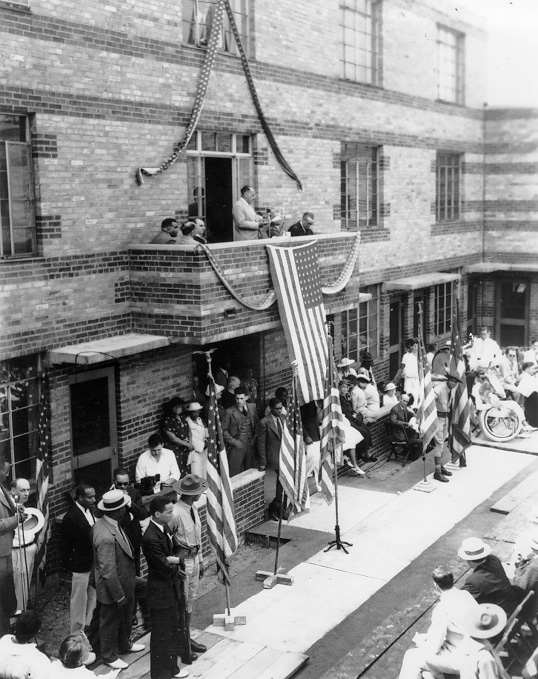 A crowd listens to an official speaking from a balcony at the dedication ceremonies for Outhwaite Homes, Aug. 1937. WRHS.

Between 1900-20, Cleveland's population doubled, from 381,768 to 796,841; this influx of mostly unskilled workers worsened inadequate housing. While the city did purchase a parcel of land in 1913 for low-cost housing, none ever materialized. In 1917 the Cleveland Real Estate Board secretary claimed that there was need for an additional 10,000 houses, and another Chamber of Commerce investigation revealed that living conditions needed immediate remedy. This time the chamber funded a real estate firm for housing AFRICAN AMERICANS in the old Central area and tried to secure a million dollars from the federal Wartime Emergency Housing program. The scheme was dropped, however, when the war ended.

During the postwar period, housing problems increased, especially for the growing black population. National reformers introduced the concept of limited-dividend housing: investors would receive only a 6% return, but the housing would be tax-exempt. State legislator ERNEST J. BOHN studied the program. In 1932 former city manager DANIEL E. MORGAN and Bohn, now representing HOUGH on CLEVELAND CITY COUNCIL, pressed for passage of the state Public Housing Act, which authorized the creation of a semiprivate Public Housing Corp. to build low-cost housing. The law failed to work, however, because reformers were unable to secure tax exemption to attract private investment. Undaunted, Bohn persuaded the city council to investigate housing conditions. In 1933 Cleveland sponsored the first national slum-clearance conference, attended by experts who formed the National Assn. of Housing Officials, with Bohn as president. In Cleveland, Bohn continued to press for legislation that would provide tax incentives for investment in low-cost housing. His pragmatic approach was attractive to the ailing construction industry and reformers. In 1934 a limited-dividend housing bill with tax exemption came into operation. Its sponsors thought that such housing could be built with Reconstruction Finance Corp. funds, but plans failed when local sponsors could not raise the required 15% matching money. Bohn concluded that "slum clearance and the construction of housing for poor people would have to be taken on as a direct public responsibility without private investments." To persuade Clevelanders that slum areas were an economic liability, he launched a study with the assistance of Bp. ROBERT B. NAVIN, a sociologist, and HOWARD WHIPPLE GREEN, a demographer. Their examination of the area between Central and Woodland avenues from E. 22nd to E. 55th streets demonstrated that the decrease in tax revenue, relative to the cost of city services, in this slum was equivalent to an annual subsidy of $51.10 per resident. Bohn believed that the results of this study, replicated in other cities, were largely responsible for the acceptance of public-supported, low-income housing. With the New Deal, $150 million of the Public Works Administration (PWA) budget was set aside for housing. Because of Bohn's work and that of local architects and contracting firms on limited-dividend schemes, Cleveland got the first 3 PWA Housing Division projects. Members of the Cleveland Metropolitan Housing Authority (CMHA, see CUYAHOGA METROPOLITAN HOUSING AUTHORITY) served as informal members of the Cleveland Housing Committee, the PWA advisory body, and worked with the directors of the limited-dividend company that had options on the Cedar-Central land. PWA financed innovative housing projects at Cedar-Central, Outhwaite, and LAKEVIEW TERRACE, built between 1935-37.

When the Wagner-Steagall Housing Act of 1937 created the U.S. Housing Authority, with power to loan and grant to local housing agencies, CMHA ceased its advisory role and began developing, constructing, and operating low-rent housing, under Bohn's direction. The federal statute required that local communities contribute 20% of the federal subsidy, in the form of municipal tax exemption. In 1938 CMHA and Cleveland agreed to cooperate in "equivalent elimination" of substandard dwellings. For each new dwelling unit built by the housing authority, one substandard dwelling would be demolished or brought up to housing code by the city; the city would also provide city services without charge. (In later years, CMHA did contribute a percentage of these costs.) CMHA and Cuyahoga County also signed an agreement. CMHA's first housing projects were Valleyview, Woodhill, Carver Park, and extensions to Outhwaite. In 1940 the authority took over the operation of the PWA Housing Division estates of Cedar, Outhwaite, and Lakeview Terrace. Bohn resigned city council that year to become the first paid director of CMHA, a job he had been performing since 1933. He served in that position for the next 28 years and became very influential in the field. Bohn's imprint was on every policy established by the board or executed by the management. As housing problems became acute after World War II, his modus operandi came increasingly under attack.

In the early years, the selection of estate residents was carefully monitored. Recreation facilities were provided and staffed by the WORK PROJECTS ADMINISTRATION (WPA), which also provided cultural performances. Families on relief were not initially allowed into the estates because they were not able to pay the fixed rents, but in 1949 such discrimination was prohibited by the Taft Housing Act. Without formal policy, blacks and whites were clearly separated into different estates. Despite extensive picketing by the NATIONAL ASSN. FOR THE ADVANCEMENT OF COLORED PEOPLE in the late 1940s and early 1950s, and the passage in 1949 of a city ordinance banning racial discrimination in public housing, the situation remained unchanged until the late 1960s. At the 1966 U.S. Civil Rights Commission hearings in Cleveland, a report noted that African American public-housing tenants (over 47% of all tenants by 1965) were still concentrated in a few east-side estates.

CMHA continued pioneering projects such as high-rise buildings for the elderly, which offered federally funded services. The country's first such housing was a 14-story building, part of the Cedar extension. But the increase of slums around deteriorating housing estates and the rise of a militant civil-rights movement called for new approaches. Although Bohn managed 11 projects housing 26,000 people by the mid-1960s, he refused to consider rehabilitation of existing houses or new concepts, such as scattered-site housing. Within a year of his election, Mayor CARL B. STOKES secured Bohn's resignation. Bohn's successor, Irving Kriegsfeld, former executive director of the nonprofit housing group PATH (Plan of Action for Tomorrow's Housing), aggressively pushed to end racial discrimination in west-side estates, promoted scatter-site housing throughout the city, and built integrated housing on the west side. Unlike Bohn, who had been a skillful politician, Kriegsfeld relied solely on the mayor's support to advance his programs. White council members James M. Stanton and Dennis Kucinich opposed new housing on the west side, while black council members protested scattered-site housing in their middle-class neighborhoods. Stokes backed Kriegsfeld completely despite the political ramifications and, in retrospect, considered the building of 5,496 housing units under his administration as one of his "true and lasting achievements."

Stokes's successor, RALPH J. PERK strongly opposed expanding public housing into middle-class areas. The new CMHA director, Robert Fitzgerald, formerly the authority's chief engineer, found the problems almost insurmountable. Federal housing policy favored private-sector approaches—rent supplements and low-interest loans for private developers to build or rehabilitate houses for the elderly and families of low and moderate incomes. The loans later changed to deep subsidy through the Section 8 program of the 1974 Housing Act. Increasingly, housing estates were occupied by single women, heading WELFARE households. With federal limits on the percent of a family's income that could be collected (instituted in 1968), rents no longer provided sufficient maintenance funds. CMHA became increasingly dependent on federal money, but the government provided only 90% of funds required for maintenance and less than half of other expenses. Deterioration spread, as did drug peddling and juvenile crime. Residents abandoned their Valleyview apartments, plagued by arson and vandalism. In July 1978 police officers refused to enter the estates without 2-person patrols. When ordered to resume their single patrols, police went on strike, which ended only after bitter confrontations between Mayor Kucinich and the union. CMHA conflict and crime made daily headline news.

In the midst of despair, the tenants organized; they fought to secure representation on the CMHA board, better security, and improved facilities. Local council members obtained community block grants to help finance additional security and community improvements. The CLEVELAND FOUNDATION funded grants for tenant-management training. Lakeview Terrace's tenant council invited Bertha Gilkey, an activist from St. Louis, to help them organize self-management of their estate. Between 1976 and 1986, housing for the elderly continued to spread. Not usually in slum areas, they have not been plagued with the problems that have afflicted Cedar Extension and Riverview. In the 1980s, executive director George M. James changed policy regarding rehabilitation. Proposals for demolition of Cedar and Lakeview Terrace apartments were rejected in favor of restoration and improvement. In the summer of 1985, newly restored model suites in the Cedar estate were presented at the 50th anniversary of its construction. With all its faults and shortcomings, the public-housing movement in Cleveland brought decent housing to hundreds of thousands of low-income people.