SPONSORED FILM production was a significant industry in Cleveland and an essential part of its FILM HISTORY. Sponsored films provide a unique window into the world of 20th-century American culture. The pictures that these films present are often quite distinct from those found in feature films.

The history of sponsored films goes back to the very beginning of the motion picture industry. The dividing line between a "sponsored" film and a "theatrical" film is often fuzzy. Sponsored films have won Academy Awards, and major Hollywood actors and actresses have frequently appeared in sponsored films. Sponsors often underwrote or paid to place their products in theatrical films.

Sponsored films were produced for an ad agency or client company for a specific purpose. Usually, there was no charge for watching them. A Clevelander might see a sponsored film in a theater as a short subject preceding the featured attraction. Sponsored films were also shown at on-the-job training sessions, lodges, women's organizations, 4-H clubs, scouting groups, Grange branches, and similar groups. More significant than any of these was the biggest captive audience of all: schoolchildren.

In its day, the sponsored film industry employed thousands and supported two long-running trade journals, Educational Screen (1922-1971) and Business Screen (1938-1982). As the need for sponsored films grew, specialized studios sprang up near the film sponsors' ad agency and industry headquarters.

Some sponsored films produced in Cleveland were national in scope and reached large audiences. When the CLEVELAND ELECTRIC ILLUMINATING CO. silent film, The Heart of Cleveland (1924), played in the CLEVELAND PUBLIC AUDITORIUM, it packed the building – 19,000 people – the biggest crowd in the building's history at that time. The film was also shown to 5th graders and older in every school with an auditorium in the Cleveland school system.

In the 1940s, 1950s, and 1960s, Clevelanders learned about the OHIO BELL “Princess” Telephone, the GENERAL ELECTRIC FM radio, the criss-cross phone directory, and even television through sponsored films made by Cleveland studios. Clevelanders flocked to FISHER-FAZIO to pick up “fine art reproductions,” glasses, or silverware because they saw them advertised on sponsored films. Home Miracles for the 1950s, the first filmed TV infomercials, were made in Cleveland. The over 1,300 radio shows and 180 filmed TV shows of The Ohio Story made in Cleveland and sponsored by Ohio Bell was one of the longest-running radio and television series in the country. 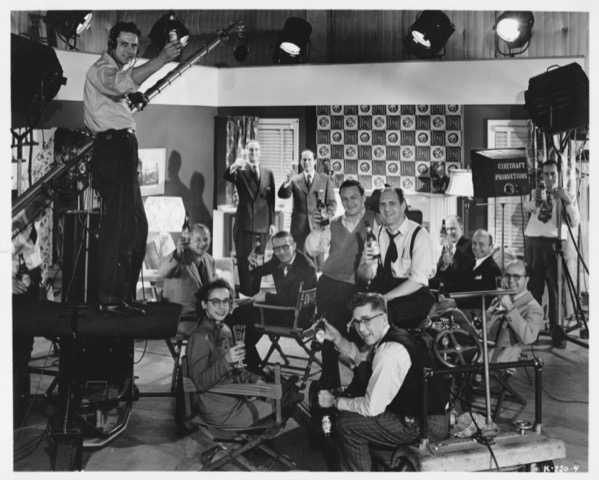 Hagley.org
Sponsored film studios based in Cleveland helped launch a number of beer brands and beer packaging innovations – like these from the Carling Brewing Company. Here, Sherlock Holmes actor, Basil Rathbone, is on a Cinecraft Productions set promoting the Leisy Premier Theatre, a 1951 weekly TV show.

During WORLD WAR II, sponsored film producers put peacetime production on hold and went to work for the war effort. After the war, the sponsored film industry exploded thanks in part to the availability of war-surplus 16mm equipment. By the late 1950s, TELEVISION had eclipsed all other means of sponsored film distribution and Cleveland-based sponsored film studios led the way, with the four largest studios being Cinecraft Productions, ESCAR Motion Picture Services, Edward Feil Productions, and Tri-State Motion Pictures. However, in the 1970s the advent of inexpensive, portable video equipment made it more economical for organizations to switch from film to video and move production in-house. As cable and home video became more common and viewers’ options expanded, the traditional sponsored film audience waned.

Unlike theatrical features that are safeguarded by a handful of corporate owners and public archives, sponsored films are found in a variety of repositories, ranging from private collections and corporations to regional nonprofits and commercial stock footage libraries. The Cinecraft collection at the Hagley Museum and Library in Wilmington, Delaware is the exception. Hagley has committed to catalog and digitize the thousands of sponsored films, TV commercials, sound slide films, scripts and related records in the Cleveland-based Cinecraft archives.