Betty Buehner Culley (1914-2016) started her film career in one of the few important film jobs open to women, film cutting (editing), first in Cleveland then in New York. Her foresight to adopt 16mm sound film, a relatively new format at the time, to produce economical industrial films allowed Cinecraft to win major clients, from WESTINGHOUSE ELECTRIC CORP. to the GENERAL ELECTRIC CO.

Born in Norwalk, Ohio, Ray Culley (1904-1983) began his film career as an actor in Hollywood in 1931. He quickly moved to work behind the camera. The Internet Movie Database lists him as a production manager, assistant director, or second unit director for 23 movies in the 1931-1937 period. In 1937 he relocated to Cleveland to direct five General Electric films for Cleveland-based Tri-State Motion Pictures. Shortly after, Betty and Ray married and started Cinecraft. 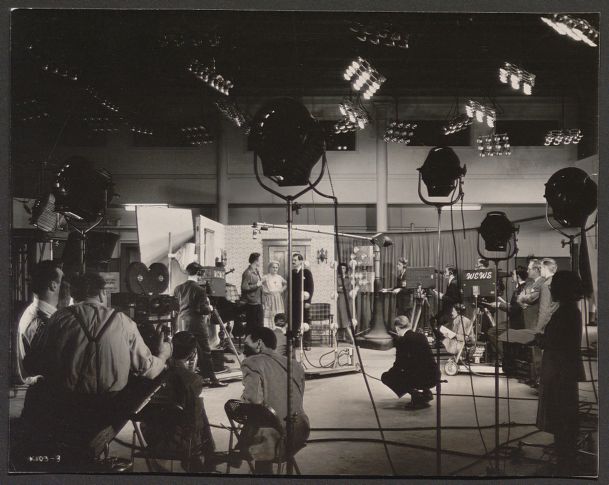 Cinecraft was also an important presence in early television. The studio was one of the first to use three cameras filming simultaneously in filming for TV. The film from the three cameras would be edited together to produce a program that would match the feel of a live TV broadcast. The studio helped produce THE OHIO STORY TV series (1953-1961) for the OHIO BELL TELEPHONE Company. A creation of author FRANK SIEDEL, The Ohio Story began as a three times a week radio series from 1947 to 1953. In 1954 it switched to two radio shows and one TV show a week. The radio series ended in 1955. Over 1,300 radio episodes were aired. The Ohio Story TV series first aired on October 4, 1953, and ran for nine years. 175 Ohio Story TV episodes were produced.

The first filmed TV infomercials ever produced were made by Cinecraft. The infomercial featured William Grover “Papa” Barnard selling Vitamix blenders on a show called “Home Miracles of the 1950s.” The studio made many early TV sewing, cooking, and craft films of Cleveland-based LOUISE WINSLOW, a pioneer in TV programming targeting women. Another early Cinecraft TV program was a five-part series for the AUSTIN CO. “Television Televised” (1948). The series explained how live television was shot and how it was transmitted to TV sets.

Cinecraft used local talent drawn from the CLEVELAND PLAY HOUSE for most of their films and collaborated with the CLEVELAND SYMPHONY ORCHESTRA when a memorable music score was needed. Occasionally, at their client's request, they would recruit known Hollywood actors to appear in their films. Well-known celebrities who appeared in Cinecraft productions include singer, dancer, and movie star, Danny Kaye; Tim Conway, co-star of “The Carol Burnett Show;” ERNIE ANDERSON, the voice of ABC and announcer for the TV sitcom “The Love Boat"; Clevelander Joel Grey (born Joel David Katz) best known as the Master of Ceremonies in Cabaret on Broadway as well as in the 1972 film adaptation; Chet Huntley the co-anchor with David Brinkley of NBC's evening news for 14 years, and Basil Rathbone, “Sherlock Holmes” in fourteen Hollywood films made between 1939 and 1946.

Paul Culley (1924-2016) took over ownership of the studio from Ray in 1970. Twenty years younger than his brother, Paul was a war hero. A flight engineer on B-17s, his plane was shot down twice over Germany in WWII. Paul led the transition from film to video in the 1970s. For over 50 years, a member of the Culley family ran the studio, and many Culley family members worked there.

In 1976, Neil McCormick took a directing and editing job at Cinecraft. Ten years later, Neil and medical television producer, Maria Keckan, bought Cinecraft as 50-50 partners. Together they completed making the leap from film to broadcast quality video as industrial and commercial clients demanded faster and easier ways to make effective motion pictures. In the 1990s, the studio started to transition to digital technology with interactive computer based medical training programs. These videos not only taught the learner but tracked their learning and gave instant feedback to the viewer on their answers. This early beginning of e-learning was improved upon through the years as Cinecraft Productions became known for excellence in e-learning, producing national and international projects for fortune 1000 companies. Today, the studio is unique as  an eLearning company with high end video capabilities as well as digital programming for e-learning. After 32 years of growth under Neil McCormick and Maria Keckan, the next generation of leadership is installed with Dan Keckan as CEO and Matt Walsh as Chief Operating officer.

Cinecraft is privately owned and has had only three owners in its first 80 years of operation. As of 2021, it was still operating out of the JOHN EISENMANN designed CLEVELAND PUBLIC LIBRARY - West Side Branch building at 2515 Franklin Boulevard in Ohio City that Ray and Betty Culley purchased in 1947.