UNION DEPOT was the name given to the 2 major railroad stations erected in Cleveland before 1930. Prior to the construction of the first Union Depot in 1853, the railroads serving the city each maintained its own small depot. The first union depot, built at a cost of $75,000, consisted of a group of wooden sheds centrally located at the foot of the hill where Bank (W. 6th) and Water (W. 9th) streets met the lakeshore. After it burned in 1864, the second Union Depot was opened near the same site in 1866. At the time of its construction, the new depot, measuring 603'x180', was the largest building under 1 roof in the country. Built at a cost of $475,000, its walls were made of Berea sandstone and it was among the first buildings to utilize structural iron. A 96' tower dominated the station's southern facade when it was dedicated on 10 Nov. 1866. 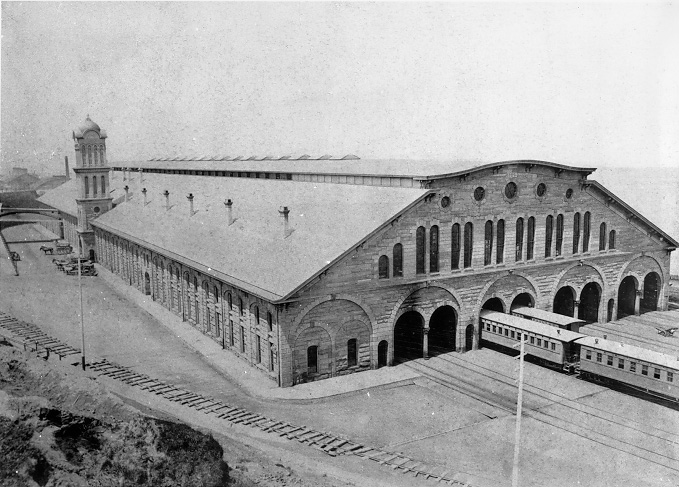 This image, taken from above the railroad tracks shows the Union Depot, Cleveland's second railroad terminal, on the lakefront, ca. 1866. WRHS.

By the 1890s, Union Depot was too small for the number of trains and people coming into Cleveland daily, and as it grew grimy and dingy it became an embarrassment to many citizens. Plans for another depot, part of the Group Plan of 1903, now the MALL, were begun, but World War I intervened and waterfront rail space became too crowded. Eventually the VAN SWERINGEN brothers, owners of the NICKEL PLATE RAILROAD, persuaded the city and the other passenger railroads (except the Pennsylvania) to allow construction of a rail depot as part of the CLEVELAND UNION TERMINAL complex at PUBLIC SQUARE. When the Terminal Tower opened in 1930, Union Depot lost the bulk of its traffic. Only the Pennsylvania Railroad continued to use the old station, until Sept. 1953; it was razed in 1959.