In the early days of commercial television, the networks did not broadcast shows until the evening, so the broadcast day's bulk consisted of locally produced programming. It was thought that daytime programming would never be successful. Many stations didn't even try.

One of the people responsible for proving the prediction wrong was Cleveland-based Louise Winslow, a pioneer in early daytime TV. A natural teacher and entrepreneur, she was among the first to use television to teach sewing, cooking, and crafts for daytime audiences. Richard Irvin, the author of The Early Shows: A Reference Guide to Network & Syndicated Prime Time TV Series from 1944 to 1949, called Winslow “the Martha Stewart of her day."

Born in Indiana, Winslow started her restaurant and retail management career as the training director at Harzfeld’s Department Store in Kansas City in the late 1930s. In 1942, she joined the Women's Army Auxiliary Corps (WAAC). She trained in Iowa at Fort Des Moines. Fort Des Moines is notable as the place where African Americans were trained to be officers for the U.S. Army during World War I and where women first began training for U.S. Army service in 1942. Her first Army assignment was teaching food preparation at the WAAC officer's school at Fort Des Moines.

In 1943 she headed to Italy as a WAAC Captain and Commanding Officer of the Allied Service Women’s Club in Caserta, Italy. The Club averaged 2,000 guests a day. At Caserta, Winslow won theatre-wide fame when she insisted that women at war deserved ruffled spreads on their beds and ruffled curtains on their windows. She was known throughout the rest of her Army career as “Ruffles” Winslow.

When she left the service in February of 1946, Winslow enrolled at Columbia University and earned a Masters of Arts Degree. She then took a job as an instructor in home economics at Columbia and lectured at Brooklyn College.

On 9 August 1948, Winslow began "Through the Kitchen Window," a 30-minute, scripted twice-weekly live cooking and home economics program sponsored by the Perfection Stove Company, Youngstown Kitchens, and EAST OHIO GAS COMPANY. Each part of the production was carefully timed. The program used two cameramen, two video engineers, a sound engineer, and an electrician. Lucille Ryan, an experienced stage and radio actress, and director directed the show.

The show was broadcast from a new TV studio built just for her show in the East Ohio Gas Company Building at E. 6th Street and Rockwell Ave. in Cleveland. The show aired on WNKB-TV (channel 4) (now WKYC), the second television station in Cleveland to debut, ten months after WEWS-TV (channel 5) and the fourth of NBC's five original owned-and-operated stations.

The Radio and TV Critic for Billboard, Talbot Harding, gave the opening a favorable review: "Caught on its first showing, this show was found remarkably polished in all departments. Dressed for the kitchen and obviously at home in it, Louise Winslow made an Angel-food cake, iced it, and prepared a combination of ham, cheese, and asparagus dish. The highest praise on this show goes to the continuity writers, producer, and director. Discovered in her kitchen, Miss Winslow dressed, talked, and acted like the middle-class housewife's conception of how she herself would like to talk and act in her own kitchen."

At first, the 2 p.m. show was on two days a week, but by 1949 it was on four days a week. The Monday program featured laundry techniques. Tuesday was devoted to cooking and recipes. Wednesday focused on sewing lessons, and Thursdays again concentrated on cooking.
In the Fall of 1949, Winslow created and starred in a WNBK-TV sewing program called “Domestic Designs” in Cleveland.

In 1949 she also planned and starred in “At Home and How,” a live weekly half-hour daytime program featuring cooking, sewing, crafts, and home decorations out of New York. The series, sponsored by the Domestic Sewing Machine Company, ran on WNBT TV, NBC’s network flagship station in New York. Carl The series started on Saturdays for the first four weeks but moved to Wednesdays at 8 p.m. against "Arthur Godfrey & His Friends" on January 29.

In February 1950, Winslow became a nationally known TV personality when the film, radio, and television department of FUlLER & SMITH & ROSS ad agency working for the Domestic Sewing Machine Co., contracted with CINECRAFT PRODUCTIONS to film her “Adventures in Sewing” syndicated TV series. Thirteen 30-minute episodes were produced and distributed to 29 TV stations across the county. The series went through all the steps in “Custom Tailoring a Suit,” starting with pattern selection, layout, and cutting. Other topics covered in the series included “How to Make an Evening Bag,” “How to Sew Plastic Film and Fur Fabric,” “How to Make Curtains,” “How to Make Draperies,” and all the steps in making a dress.

In the 1950s, Winslow wrote and performed in home economics programs sponsored by WESTINGHOUSE ELECTRIC CO., SHERWIN WILLIAMS, and Kroger Supermarkets. Alcoa featured her in a print ad campaign for Scotch cellophane tape in newspapers and magazines, including LOOK. 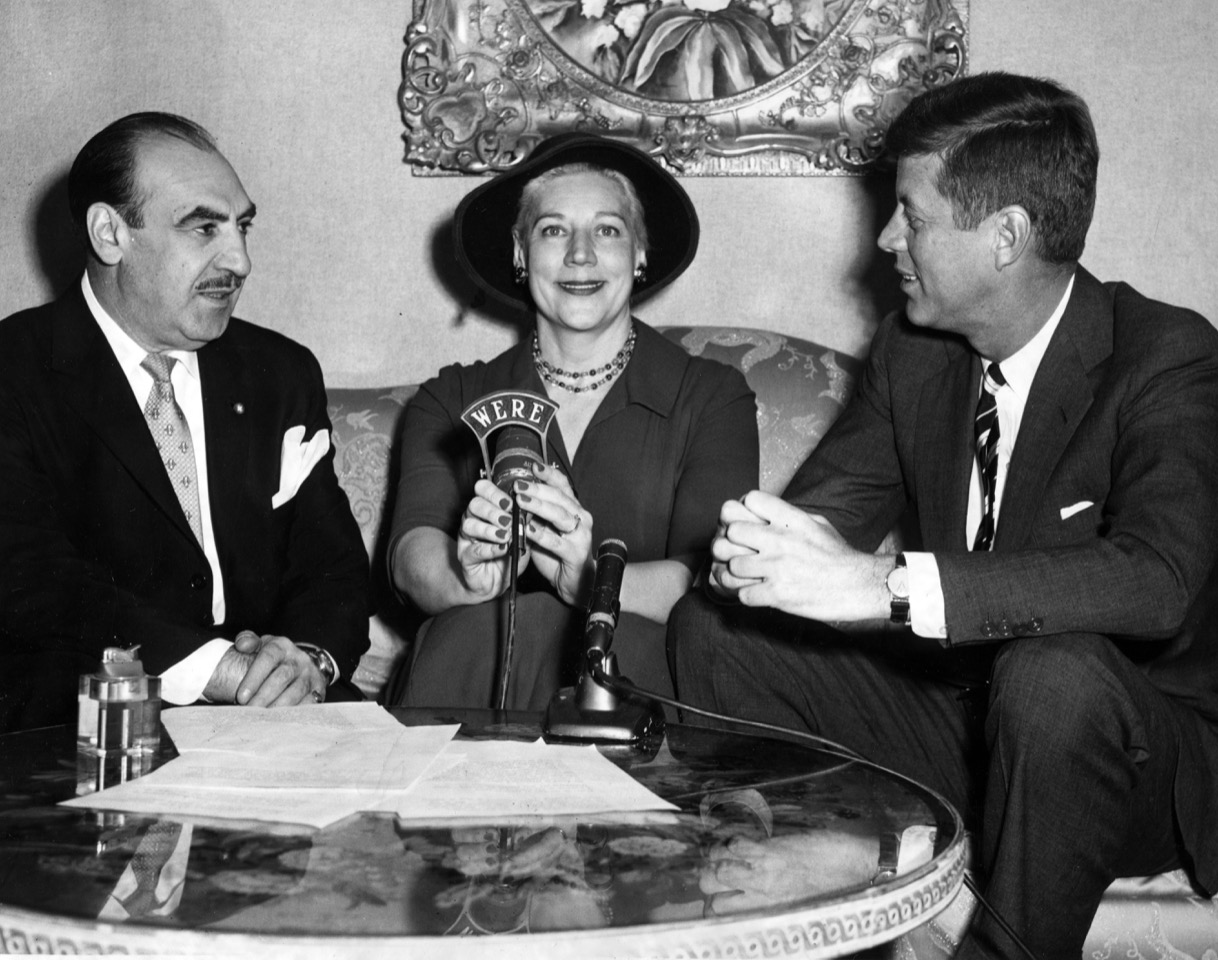 In 1955, a dream hatched in 1949 by WERE General Program Manager Dick Klaus, and Winslow, became a reality when Winslow took on the job of hosting a morning daily radio audience participation show called “Brunch Time.” The show, advertised as Cleveland’s Top Women’s Show,  was broadcast at 10:30 a.m. from the Tea Room of the HALLE BROTHERS Department Store in downtown Cleveland. The program touched on various subjects, including home efficiency, theater, home and outside entertainment, hobbies, and crafts. Prominent citizens and visitors to Cleveland and two or three audience members were included in every broadcast.

“Brunch Time” had a 5-year run coming to an end in 1959 when WERE radio took on a new look, and Winslow's program, along with several others, was canceled.

Her last known TV appearance came in 1960 when she starred in the short-lived show called “Louise Winslow” for WEWS in Cleveland.

Winslow's career came to an end in August 1963 doing what she loved – teaching home economics subjects when she starred in a four-day "High Fashion Sewing" Seminar at a Halle's Department Store in Westgate Shopping Center in Rocky River, Ohio.

Winslow died in 2001 at age 83. Winslow and her husband are buried in Fort Logan National Cemetery in Denver, Colorado.

In 2021 twelve Winslow’s filmed TV shows were posted on the Hagley Library research site. “Food Is Fun,” a remake of the angel food cake episode of Winslow's first live "Through the Kitchen Window" (9 August 1949) show on WNKB, probably has the greatest appeal for today’s TV viewers.