School of Medicine Dean Richard E. Behrman formed a Center for Biomedical Ethics in the late 1980s, and appointed Thomas Murray as the Director.  Dr. Murray stayed in that position for approximately 10 years before going on to become the director of The Hastings Center. Dr. Stuart Youngner was appointed Director of the Center in 2001. The Center became the country’s first Department of Bioethics in a medical school in 2001.

In February 2015, Dr. Youngner stepped down as Department Chair.  Mark Aulisio, Ph.D., was appointed Interim Chair. Dr. Aulisio became the Susan E. Watson Professor and Chair of the Department in 2016. The Department of Bioethics celebrated 20 years in 2021.

In 1995, the then Center, launched one of the first Master of Arts program in Bioethics  emphasizing the multi- and interdisciplinary nature of the field. Since 1995, it has provided advanced training in bioethics for students and professionals who will encounter bioethical issues in the course of their primary careers. In 2017, the Department formally incorporated Medical Humanities into the Master's program. In 1999, the Center launched the country's first PhD in Bioethics program, still regarded as one of the most respected. 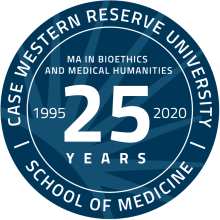 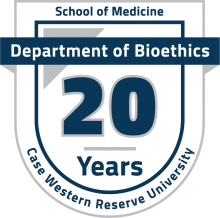