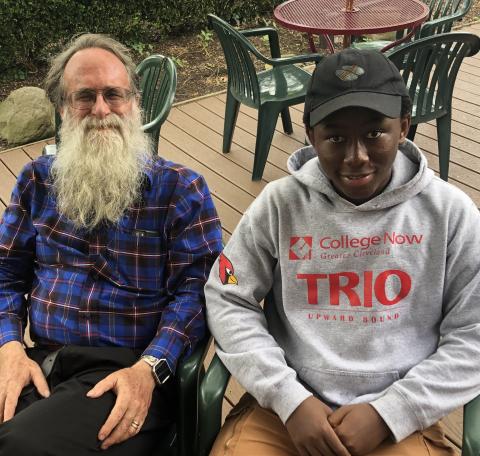 It’s a warm summer day in mid-July. The air is breezy, and the clouds are threatening to interrupt our visit on the Coffee House patio with some much-needed rain. Dr. Rolfe Petschek—a recently-retired physics professor at CWRU who is Jefferson Adjetey’s mentor in the Provost Scholars Program—takes a long sip from his mango smoothie. When Adjetey and Petschek are together, it’s a familiar feeling. They have a level of comfort and ease between them that resonates. When they speak, the exchange is peppered with smiles and laughter.

Adjetey has just offered an update on his recent success during an entrepreneur contest in which he came in third at the regional competition. Adjetey’s concept—a men’s grooming tool combining a brush and spray under the corporate label “Jefco Brushes”—won first place at Shaw earlier that year.

“That’s very impressive!” said Petschek. “What did they say was the issue with your product?” Jefferson explained that he needed an authentic prototype to have placed above the others. “And you still placed third. You should be very proud!”

When Adjetey came to Petschek with the idea for his special brush, they set off to make the perfect prototype—but it turned out to be more challenging than they anticipated. The harder they worked at it, the harder they saw it was going to be to make a legitimate prototype (“there are 15 pieces in a spray bottle!” said Petschek).

Even though Adjetey has his eyes set on the medical field, he took a business class at Shaw High School. He thought it would be interesting and fun to try something new. Since Petschek isn’t one to shy away from a challenge either, the two bonded quickly over the thrill of invention. “We played with spray bottles...to find something close to working,” said Petschek. “We spent a whole lot more time learning what to do than actually doing it!” Adjetey laughed in agreement.

“I think working with Dr. Petschek taught me that if you have an idea and it doesn’t work out, to branch out and don’t give up on that same idea and move toward a different solution,” said Adjetey. “I learned that Jefferson is very determined and strong-minded. I learned a lot of details about how pumps work,” added Petschek with a great, booming laugh that he shared with Adjetey.

Beyond learning to appreciate the work of professional fabricators, Adjetey and Petschek learned a great deal about each other. Adjetey mentioned that he enjoyed answering Petschek’s relentless questions about life in his native Ghana, and Petschek found their discussions about Adjetey’s plans for the future inspiring.

Once the smoothies were gone and the rain arrived, both vowed to stay in touch with each other. Petschek and his wife recently bought a home in Maine where they plan to spend time on the beach, go kayaking, travel, plant fruit trees and continue his gardening hobby.

In the weeks that followed that meeting, Adjetey was selected as a semi-finalist for the 2020/2021 Cleveland Browns Foundation Marion Motley Scholarship.  Out of more than a thousand applications from all over the Greater Cleveland area, he is one of only six semi-finalists.

The future is looking bright for them both—and they each credit the other with helping to provide the foundation for a legacy of success. 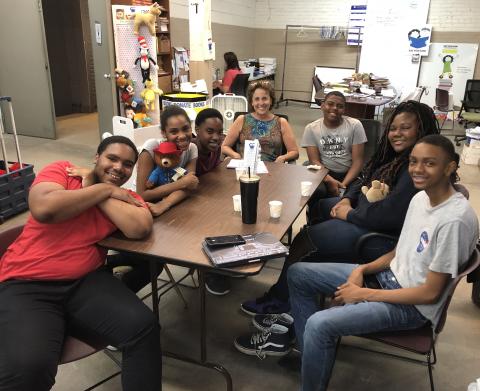 For four weeks, the Scholars took ACT prep courses on Monday and Wednesday mornings. On Tuesdays, Thursdays and Fridays, they engaged in intensive science, math and ELA coursework. Two to three afternoons a week were then spent on Advocacy Workshops.

The advocacy component of the Summer Learning Institute provided opportunities for the Provost Scholars to explore, research, and implement solutions to problems they had identified through the course of the University Intensive Seminars during the previous school year. Each week had a theme: Education; Social-Emotional Learning; and Community Leadership.

The Scholars created portfolios in which they pursued the issues that they wanted to address in the community and beyond. They learned how their own political beliefs affect their civic understanding. With the help and encouragement of Mentor Lisa Kollins, the Scholars called and wrote their local, state and national representatives to express their concerns. Taking a trip to the Cleveland Book Bank was an opportunity to not only learn about how others are promoting literacy initiatives, but also offer suggestions and feedback for new and innovative programs. On the last day, the Scholars joined the Community Innovation Network lunch meetup at the Urban Community School to share their ideas and engage in discussions with other local leaders.

At the end of the four-week summer program, the Scholars presented their findings to school administrators, parents, mentors, and community stakeholders during an Advocacy Institute Webinar at Heritage Middle School. The presentations led to action steps that the Provost Scholars hope to implement and evaluate throughout the current and upcoming academic years.

Provost Scholar Avery Gibson offered his perspective on the Institute: “All I have to say is that this program gave me a lot of new experiences. I’ve never felt disrespected. I learned a lot from this program academically and socially. I also learned more about my own community. And last but not least, I feel like this program will give me lots of opportunities…I love it!”