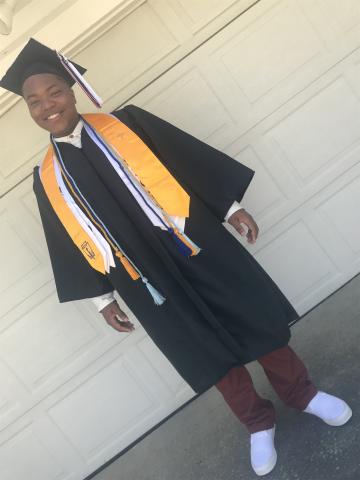 Brian Johnson, Shaw High School 2020 graduate and Provost Scholars alumnus, spent the summer working to save money before beginning his classes at Kent State University this fall.  Johnson said that his experiences in the Provost Scholars Program have prepared him for college by providing him with a better understanding of what to expect.

“My family and friends have been asking me, ‘are you nervous [about going to college]?’ My answer is always ‘no,’” said Johnson. “I truly believe that is because I’ve witnessed for the past four years how college students live and function. Yes, it will get hard and stressful, but that’s just life.”

While in the Provost Scholars Program, Johnson had the chance to work with Mentors Dr. Patricia McDonald & Dr. Ronald Hickman in the Nursing School—a career path he is now pursuing. In his senior year, he also had the opportunity to be mentored by Dr. Jim Sheeler in the English department. Johnson spoke highly of his mentors and the direction they offered.  “As far as what I aspire to do, I have worked with some of the best people on the planet. They have helped me to better understand what to expect as I prepare for a medical career and beyond.”

Johnson also offers this advice for the Provost Scholars who are still in the program: “Take advantage of every opportunity that is given to you, whether you like it or not. Some things you don’t like may give you an advantage over someone else because you can say, ‘‘I experienced this, and it has taught me this.’”

We look forward to sharing more of Johnson’s journey as he navigates college life at Kent State. 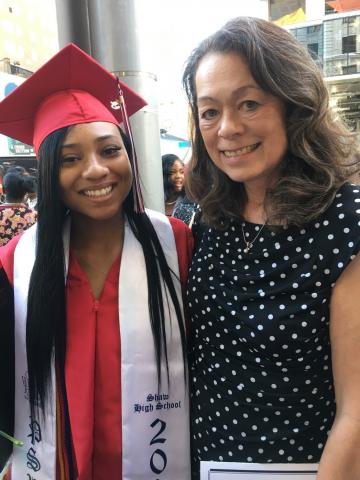 Maranda Priah, Shaw High School 2019 graduate, has just begun her second year at Case Western Reserve University. She spent much of her summer continuing her service as a Youth Council Member through Empowering Youth Exploring Justice (EYEJ). With a special focus on recruitment and outreach, Priah has established partnerships with other youth organizations in Cleveland and Shaker Heights, and also throughout Ohio. EYEJ recently organized a townhall event on the Digital Divide in Cleveland on August 28, 2020. The virtual event focused on the issues of internet and technology access, topics that are especially relevant right now: many schools in under-resourced areas are not well equipped to meet the demands of remote learning during COVID-19. One of EYEJ’s goals is to help bring free internet service to Cleveland.

With one year of college under her belt, Priah says it’s been a very different experience than high school. “I loved taking classes that I got to choose. I loved meeting new people. I loved walking to class. I loved my ESP [Emerging Scholars Program].” She spoke highly of working with ESP coordinator Arthur Evenchik and director Dr. Steve Haynesworth. As an added bonus, she was paired with another Provost Scholars alumna, Jiara Sanders (CWRU ’20), through the Collegiate Connections peer mentoring program. Priah shared, “We had time to get together. She was great!” They were able to talk about course selections since they share the same major (Sociology). Priah is also considering Psychology. Her Provost Scholars Mentor, Dr. Thompson, has continued to stay in touch with her.

Priah maintained that she wouldn’t change anything about her choices to get to where she is today. She conceded, however, that she wishes she had taken a financial literacy course before enrolling at CWRU. “When it came to financial aid and loans, I was kind of confused. I would have liked to learn to budget my money.”, She did mention, though, that she quickly learned how to budget her time.

“Classes were enough,” Priah admitted about adjusting to college activities. “I didn’t want to do too much. It was already rough [because of the pandemic]. We had to move out of dorms and still had to submit assignments that were due and assignments were being added…but learning time management was really helpful.”

Priah’s advice to the Provost Scholars is not to underestimate the importance of using a planner. She discovered that a desktop planner wasn’t as effective for her as she’d hoped, so she switched to Google Calendar, which allowed her to program in notifications and reminders.

Most of all, Priah wants to encourage her fellow Scholars to pursue any and all financial opportunities to support their learning. “Scholarships. Please fill them out. You may not get them, but please fill them out! It’s free money.”

Keep an eye out for Priah on the CWRU campus. It will be exciting to see which Provost Scholar alumni she will be mentoring in a few years. 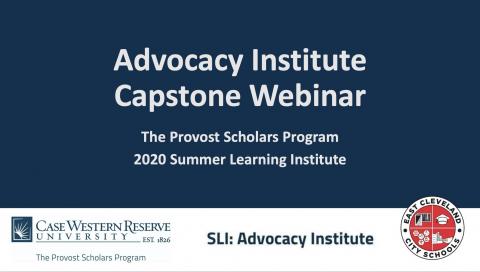 Seven Provost Scholars entering ninth and tenth grade at Shaw High School this fall participated in this year’s Summer Learning Institute (SLI). This program provided students with an opportunity for intense academic and advocacy work. While five participants had attended the previous year, the experience was still new to them and everyone involved because of the shift to a virtual learning space.

The SLI is a rigorous program of academics and social emotional learning, traditionally exclusively offered to the rising 9th grade Provost Scholars. The four-week program includes ACT test preparation, advanced academic coursework (with an emphasis on math and science), and engagement in advocacy workshops.. The participants keep portfolios of their work, and everything culminates in a capstone webinar the final day of programming. This year’s webinar took place on August 7th.

This summer’s programming was developed and taught by a team of instructors from Case Western Reserve University (faculty, staff and students) and administrators from the East Cleveland Schools. It also included special guest workshops hosted by the Northeast Ohio Alliance for Hope (NOAH), The Superhero Project, and Twelve Literary Arts. 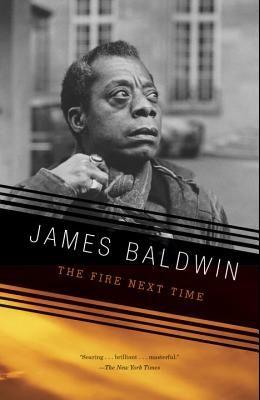 The Advocacy Institute was an especially impactful component of this summer’s SLI. Comprising a series of workshops, activities, and events held weekly on Mondays, Wednesdays and Fridays, the Advocacy Institute facilitated energized and meaningful dialogue. The Scholars met on Zoom as a group to discuss common community concerns, take part in workshops, and conceptualize their roles as advocacy leaders. They read and studied The Fire Next Time by James Baldwin as the foundational text for this work. Eva May Barrett, a student worker for the Provost Scholars and CWRU senior, was instrumental in bringing the Advocacy Institute portion of the SLI to fruition. Each session began with a “community candle,” a moment in which the group came together for quiet reflection before getting down to work. Many participants said this was one of their favorite parts of the day. Participants also commented on the vital role of program leadership and peer engagement. For instance, tenth grade Scholar Amaya Dennis was emphatic about Barrett’s energy. “If I was having a bad morning,” said Dennis, “I could instantly be happy when she started us off.” Ninth grade Scholar Terrion Castro enjoyed being able to speak her mind and share ideas with the other Scholars. “It was an opportunity to see [them] engage with the work of James Baldwin and the poetry of local artists as lenses for viewing and understanding issues affecting our society,” said Barrett.

Many Scholars said they felt the SLI made them closer, like a family. Interestingly, family was a common theme during the SLI. Guest presenter Mary Barrett, Eva’s sister and fellow teaching artist, offered a thought-provoking workshop. “I also loved when Eva's sister Mary came into the call and spoke,” said Dennis. “Her entire vibe was so chill yet so powerful.” 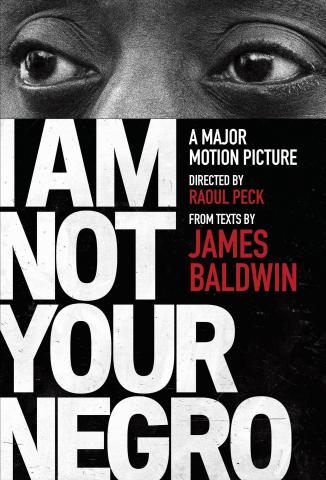 Even when the Zoom sessions weren’t happening, the Scholars worked on other aspects of the program, such as coursework through Khan Academy, preparing for their capstones, and writing a reflective essay on the film, I Am Not Your Negro. “I loved watching I Am Not Your Negro because a lot of the clips of James Baldwin speaking really stabbed me in the heart,” said Dennis. This was the first time many of the Scholars had read the writings of Baldwin. Barrett shared the Scholars’ zeal: “Watching them dive into their readings and identify real parallels between the issues affecting Baldwin’s era and those affecting us today was both inspiring and humbling.”

As an added bonus this year, the SLI participants were able to take part in The Superhero Project as part of the Advocacy Institute. The Scholars were invited to interview with Mentor and Superhero Project director Lisa Kollins and have their “superhero” alter-ego created for them by a local artist. “The Superhero Project portion was extremely fun! I loved being able to express myself in one picture, because a picture is a thousand words,” said Dennis. Another Scholar couldn’t believe how much information she was able to  share during her interview. She explained, “It felt like a fountain of ideas coming out. I had no idea I thought this way about so many things!” 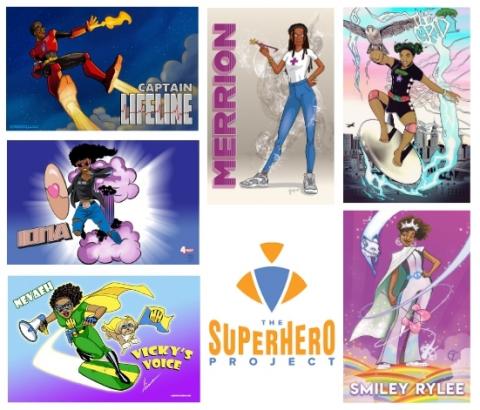 On Tuesdays and Thursdays, the Scholars met earlier in the day to work with CWRU Tutors Livia Timpanarro-Perrotta, Kyle Fogarty, and Marisa Varghese, who collectively created and taught an entire ACT prep course that catered exclusively to the group. In addition to focusing on subjects covered in the test, the Scholars learned a great deal about test-taking strategy in general. “The science portion of ACT prep was very enjoyable because of how Mr. Kyle, Ms. Marisa, and Ms. Livia all worked together to use their specific skills sets to pertain to each of our needs,” said Dennis. Fogarty shared, “It was ever so impressive to witness how the Provost Scholars would work through topics wholeheartedly, without the fear of being wrong. This approach is a testament to the academic success they will accomplish.” While the Scholars agreed that they learned a great deal from the sessions, they also recognized the challenging nature of the work. Sometimes when one Scholar would get frustrated, the others would rally around and encourage them to keep going and not lose heart. “I was ecstatic to see how the Provost Scholars not only collaborated but truly encouraged their peers. I have no doubt that this fierce sense of camaraderie demonstrates how they will shape their generation,” said Timpanarro-Perrotta.

Almost everyone agreed, however, that their favorite part of the SLI was presenting the capstone webinar. “By the end of our four-week journey, the students produced an insightful presentation for the CWRU and East Cleveland community that explored the issues of mental health education and understanding, and the resources that are available to young people in East Cleveland,” recounted Barrett.

Tenth grade Scholar LaDorrein Flowers admitted he was surprised by how much he enjoyed the virtual format. “The teamwork and communication was amazing,” said Flowers. Many of the Scholars agreed that the support given by the team and their fellow Scholars really made the program work despite not having the benefit of being together in person like the summer before.

“I was brought in to help facilitate their learning and engagement, but their tenacity and attitude toward excellence in a way made me into the student. I am forever grateful, and I look forward to seeing how these young people will make a mark on our region, our nation, and our world,” said Barrett.