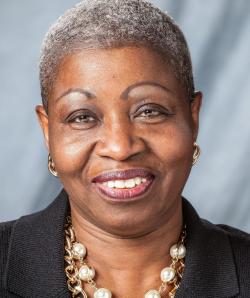 Teaching is my first love, so it should come as no surprise that after 10 years of serving as the university’s inaugural vice president for inclusion, diversity, and equal opportunity that I would return to my full-time faculty position. Even as a member of the executive leadership team, I continued to teach for the English Department and in the SAGES (Seminar Approach to General Education and Scholarship) program because of my commitment to teaching. Having earned my PhD in English from CWRU, I consider it a privilege to give back to the department that began my trajectory into the professoriate. I served as a founding faculty member of the new interdisciplinary academic minor in African and African American Studies, so I identify myself as a Professor of English and African American Studies. I also contribute to teaching courses in Social Justice, Ethnic Studies, and Women and Gender Studies at CWRU.

As a Toni Morrison scholar, I offer undergraduate and graduate courses on the Nobel Laureate and I usually include her work in other courses such as my course on the Harlem Renaissance, Slavery and the Literary Imagination, and courses on other American authors such as James Baldwin and Tanehisi Coates. I developed a new course for SAGES on “The Meanings of Difference: Constructions of Diversity in American Culture,” to engage with students across disciplines about issues including but not limited to race, ethnicity, gender, sexuality, class, ability, and religion. I believe in a dialogic approach to pedagogy, and I introduce students to the value of interdisciplinarity and intersectionality, even as I affirm the value of the humanities and cultural studies.

My publications include Folk Roots and Mythic Wings in Sarah Orne Jewett and Toni Morrison: The Cultural Function of Narrative (LSU Press, 1991), one of the first cross-cultural studies on Toni Morrison, and a memoir The Strawberry Room and Other Places Where a Woman Finds Herself (Westbow Press, 2016), and a host of articles in refereed journals and edited volumes in American and African American literature. I edited one of the volumes in the Schomburg Series on Black Women Writers and I am currently at work on completing a new book-length study on the work of Toni Morrison, which is tentatively titled “Space for the Reader: Toni Morrison’s Geopoetics of Place, Race and Be/longing.”