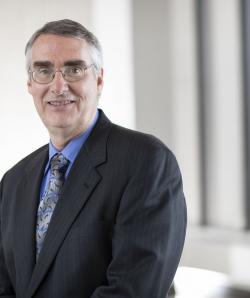 Roger D. Quinn is the Arthur P. Armington Professor of Engineering at Case Western Reserve University. He joined the Mechanical and Aerospace Engineering department in 1986 after receiving a Ph.D. (1985) from Virginia Tech and M.S. (1983) and B.S. (1980) degrees from the University of Akron.  He is a Fellow of ASME. He won the CWRU University Distinguished Research Award in 2019. He has directed CWRU Biologically Inspired Robotics since its inception in 1990 and graduated approximately 100 graduate students in the field, some of whom have reached leadership positions in industry and academics.  His research, in collaboration with biologists including Profs. Roy Ritzmann and Hillel Chiel, is devoted to the development of robots and control strategies based upon biological principles and modeling animal neuromechanical systems. Dozens of robots have been developed to either improve robot performance with biological principles or model animal systems to better understand them. He has authored more than 300 full-length publications and 9 patents on practical devices resulting from his work.  His biology-engineering collaborative work on behavior based distributed control, robot autonomy, human-machine interfacing, soft robots, and neural control systems have each earned awards.