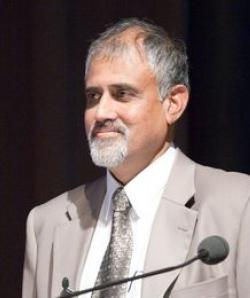 Sayan Chatterjee, PhD, is one of the leading scholars in the area of strategic management, corporate diversification, and mergers and acquisitions. He has published articles in leading academic and practitioner journals, and his research is used in PhD and MBA programs at most leading schools. Chatterjee believes that the future key to success rests on innovation. Therefore, his research is directed to developing frameworks that help people see possibilities faster while also lending unprecedented clarity to judging risks and potential. Chatterjee is the author of the book Failsafe Strategies: Profit and Grow From Risk That Others Avoid, and his research into business model innovation has appeared in numerous prestigious journals including Harvard Business Online.

Chatterjee is the recipient of numerous awards including two Best Papers from the Academy of Management. He is a Batten Fellow of the Darden School where he is actively involved in researching mergers and acquisitions, particularly post-merger integration. He has held visiting appointments at the Wharton School, Darden School, and Donaue University. He has also taught at Purdue University and the University of Michigan.

Since his appointment to Case Western Reserve University in 1989, Chatterjee has taught corporate strategy, among other courses, in the MBA program, and has taught in the Weatherhead School of Management Executive MBA (EMBA) program His courses have included the finance elective covering mergers and acquisitions and the core course in policy for EMBA students. As an innovator, he developed a new integrated course to replace the capstone strategy course at Case Western Reserve.

Chatterjee serves as consultant to both middle market firms and large international corporations. He earned his PhD from the University of Michigan.

Chatterjee teaches in Weatherhead's EMBA program and teaches corporate strategy in the MBA program. He has developed a new integrated course to replace the capstone strategy course at Case Western Reserve. He also engages in executive education in the U.S., Europe, Latin America and India. He is extensively involved in executive education typically aimed at the very senior management level.

In addition to teaching the capstone course at the undergraduate and graduate levels at the University of Windsor, Chatterjee has taught graduate capstone courses at Purdue University and Case Western Reserve. He has also taught two doctoral seminars and a graduate elective in strategic management at Purdue and has taught in the EMBA program at the Wharton School. At CWRU, his courses have included the finance elective covering mergers and acquisitions and the core course in policy for EMBA students.

If a business opportunity is profitable, there is invariably an element of risk in it. Profit is the result of a firm's ability to take risks while avoiding the adverse impacts of risks. An innovative business model can allow a firm to take on risks that others avoid. This becomes vitally important for creating business models for a sustainable world and for tapping into the wealth potential at the bottom of the economic pyramid. This approach turns the conventional idea of looking for returns first and worrying about risks later on its head.