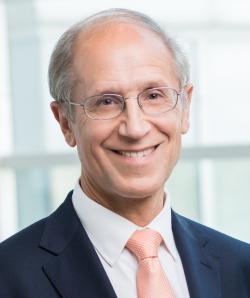 Stan Gerson, MD, is the Dean and Senior Vice President for Medical Affairs, School of Medicine, and Acting Director of the Case Comprehensive Cancer Center and the National Center for Regenerative Medicine at Case Western Reserve University, where he is the Asa and Patricia Shiverick–Jane Shiverick (Tripp) Professor of Hematological Oncology and Case Western Reserve University Distinguished University Professor. In 2012, he was the recipient of the Case Western Reserve Medal for Excellence in Health Science Innovation, the highest honor bestowed by the School of Medicine to those advancing research, education and health care. He is past president of the Association of American Cancer Institutes (2016-2018) and a member of the American Association of Physicians since 1997, and has been member and Chair of numerous NIH study sections including the National Cancer Institute (NCI) Board of Scientific Advisors. He serves on the Executive Advisory Board of 11 NCI designated cancer centers. He has earned multiple National Institutes of Health (NIH) grants and published more than 258 journal articles, 275 abstracts and 37 book chapters and 18 patents. Dr. Gerson has distinguished himself in a number of realms including his research in DNA repair and stem cell therapy, which has resulted in numerous publications and patents. Three of his discoveries are in clinical trials as new cancer therapies. He is also the co-editor of the internationally recognized textbook, "Gene Therapy of Cancer Translational Approaches from Preclinical Studies to Clinical Implementation 3" (Elsevier Limited, Oxford, United Kingdom) and the textbook "Clinical Hematology." Dr. Gerson is foremost, a mentor and educator for the next generation of compassionate cancer research scientists and clinicians.