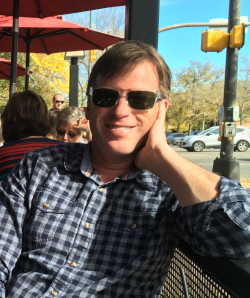 Timothy Beal (Ph.D. Emory University) is Distinguished University Professor, Florence Harkness Professor of Religion, and Director of h.lab at Case Western Reserve University. He is also PI of Finite Futures: Imagining Alternative Ways Forward in the Anthropocene, funded by the Henry Luce Foundation, Co-PI of the Humanities in Leadership Learning Series (HILLS), funded by the Andrew W. Mellon Foundation, and PI of a Responsible AI Curricular Design Project grant from the National Humanities Center. He was Chair of the Department of Religious Studies from 2015 to 2021 and Interim Dean of the College of Arts and Sciences in 2019. Earlier he served as Director (2003-07) and Associate Director (2002-03) of the Baker-Nord Center for the Humanities.

Tim has sixteen books, including When Time Is Short: Finding Our Way in the Anthropocene (Beacon Press, 2022), and The Book of Revelation: A Biography (Princeton University Press, 2018), for which he won a Public Scholar Award from the National Endowment for the Humanities. Other books include The Rise and Fall of the Bible: The Unexpected History of an Accidental Book (Houghton Mifflin Harcourt, 2011), Biblical Literacy: The Essential Bible Stories Everyone Needs to Know (HarperOne, 2009), Religion in America: A Very Short Introduction (Oxford University Press, 2008), Roadside Religion: In Search of the Sacred, the Strange, and the Substance of Faith (Beacon Press, 2005), which was named one of Publishers Weekly’s ten “Best Religion Books of 2005” and was a New York Times Book Review “Editor’s Choice,” and Religion and Its Monsters (Routledge, 2002). He is also the Editor-in-Chief of The Oxford Encyclopedia of the Bible and the Arts, which was named the Best Print Reference in the Humanities for 2015 by Library Journal.

In addition to scholarly articles, Tim has written popular essays on religion, Bible, media, and culture for The New York Times, The Wall Street Journal, The Washington Post, CNN.com, The Christian Century, and The Chronicle of Higher Education, among others. Interviews with him have appeared on several radio and television shows, including All Things Considered (NPR), The Bob Edwards Show (NPR/XMRadio), On Point (NPR/WBUR Boston), Interfaith Voices (NPR), The Osgood File, Oregon Public Radio (OPB Portland), Ideastream’s public TV show, Ideas, Animal Planet, and Crooked Media’s Unholier than Thou. His books have been featured in The Washington Post, The Baltimore Sun, The Dallas Morning News, The Orlando Sentinel, The Miami Herald, The Cleveland Plain Dealer, The Chicago Tribune, The St. Petersburg Times, The International Herald Tribune, The Denver Post, The New York Post, The San Francisco Chronicle, CNN.com, The Christian Century, The Christian Science Monitor, Salon.com, and USA Today, among other online and print news media.

Over the past several years, Tim has been working with colleagues in the programming language of Python in order to carry out research in natural language processing and machine learning as they relate to religion and the academic humanities. This work has led to the creation of h.lab, which seeks to empower scholars and students in the humanities to experiment with and critically reflect on new and emerging computational tools and methods.

Tim was born in Hood River, Oregon and grew up near Anchorage, Alaska. He now commutes between Cleveland, Ohio, where he works, and Denver, Colorado, where he lives with his wife, Clover Reuter Beal, co-lead pastor of Montview Boulevard Presbyterian Church. Tim and Clover have two grown kids, Sophie and Seth.