The NORTH OLMSTED MUNICIPAL BUS LINE (NOMBL) was the first publicly-owned bus line in Ohio.  It was established in 1931 during the administration of NORTH OLMSTED Progressive mayor Charles Alden Seltzer.  The father of CLEVELAND PRESS Editor LOUIS B. SELTZER, Mayor Seltzer had campaigned for the office in 1929 promising to reduce INTERURBAN rail fares for passenger travel between North Olmsted and Cleveland PUBLIC SQUARE.  Upon learning that CLEVELAND SOUTHWESTERN RAILWAY CO., the private sector company which operated the interurban line, was struggling financially and preparing to terminate service in North Olmsted, Seltzer organized the North Olmsted Municipal Bus line, which began running bus service (initially with two drivers and two leased buses) to and from Cleveland Public Square Square on March 1,1931, the same day that interurban service in North Olmsted ended.

As a result of operating NOMBL in Cleveland and expanding into other west side suburbs, the City of North Olmsted became a party to several lawsuits during the 1930s.  These lawsuits ultimately resulted in court decisions that established the parameters of a municipality's right to own and operate a bus line in Ohio. Most significant of these was a decision that arose out of a suit brought in 1933 by the City of Cleveland which contended that North Olmsted could not operate its buses within the territorial limits of Cleveland without Cleveland's express permission.  Ultimately, the Ohio Supreme Court held in a landmark 1935 decision that the Ohio Constitution empowered municipal corporations to own and operate bus lines, and, as such, municipal corporations had authority to operate those lines within other Ohio cities, subject only to reasonable motor vehicle safety regulations. 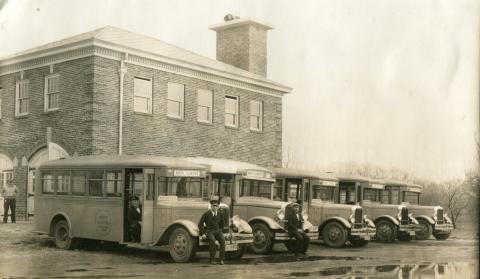 NOMBL buses and staff in front of the municipal garage, ca. 1932

Following the resolution of these lawsuits, NOMBL expanded its bus service in CUYAHOGA COUNTY to include FAIRVIEW PARK, OLMSTED FALLS, and other western suburbs of Cleveland.  For many years, NOMBL operated its bus line in Cuyahoga County without government subsidies. This changed, however, in 1972 when, for the first time, it required a subsidy from North Olmsted to meet its operating expenses. During this era, other municipal bus lines in Cuyahoga County, including CLEVELAND TRANSIT SYSTEM (CTS), were also struggling financially.  In 1974, the GREATER CLEVELAND REGIONAL TRANSIT AUTHORITY (GCRTA) was formed to provide more cost effective bus service In Cuyahoga County. From 1975 until 2005, NOMBL, which resisted GCRTA efforts to dissolve it, operated under agreements between GCRTA and North Olmsted which provided for its continued subsidized existence in the GCRTA system. In the 1980s, North Olmsted filed lawsuits against GCRTA in both state and federal court to re-establish its Ohio Constitutional right to continue to own and operate NOMBL.  Its efforts were unsuccessful as Ohio courts held that GCRTA was acting within its authority under state law when it attempted to dissolve NOMBL, and federal courts similarly held that GCRTA's attempts to do so did not violate federal antitrust law. Despite these losses in court, NOMBL continued to operate for several additional decades as a separate entity, benefiting from federal Urban Mass Transit Authority policy which required regional governments, as a condition to receiving federal grants, to permit smaller, more demonstrably cost efficient bus lines to exist within their territory.  However, following a change in that federal policy, GCRTA successfully compelled NOMBL, one of the last two municipal bus lines in Cuyahoga County, to dissolve in 2005, thereby bringing to an end its 74 years of bus service.