TAFT, FRANCES PRINDLE (12 Dec. 1921 - 14 May 2017) was an influential arts educator and Cleveland civic leader.  “Franny” Taft, as she was known, taught at the CLEVELAND INSTITUTE OF ART (CIA) for 62 years beginning in 1950, a time when women faculty were rare in higher education. She helped integrate liberal arts into a CIA curriculum that previously had featured mostly art and design. Because she taught an introductory art history course at CIA for decades and because she was an enthusiastic collector, she was widely known and admired in the arts scene in Cleveland. Taft developed a particular interest and expertise in Mesoamerican art and she traveled frequently to such countries as Mexico, Guatemala, Honduras, and Belize, avidly filling her sketchbook with watercolor images as she went. She was a trustee of the CLEVELAND MUSEUM OF ART for more than 40 years and was especially active on the museum’s Women’s Council. In 1995 Taft was awarded a Cleveland Arts Prize for her teaching and as a patron of the arts.

A woman of profound energy and drive, Taft was a committed volunteer and fundraiser for a number of community and charitable groups, particularly in the areas of education and the arts.  At various times she served on the boards of Western Reserve Academy, LAUREL SCHOOL, Cleveland Archeological Society, MARTHA HOLDEN JENNINGS FOUNDATION, and KARAMU HOUSE. She was also known for her devoted service to Vassar College, from which she graduated in 1942. In the course of her work as a Vassar alumna and a devotee of the arts, she befriended and mentored generations of young working women in Cleveland.

Taft’s eclectic range of interests also included mid-century modern architecture and sports.  In the early 1950s, she and her husband, Seth C. Taft, were among the founders of Pepper Ridge, a community of contemporary-style homes in PEPPER PIKE, 12 miles east of Cleveland. They lived there the rest of their lives, enjoying a house they helped build. She was the animating force behind the Pepper Paper, a community newspaper featuring articles written by her children among others. Taft was a gifted athlete. She was an experienced sailor and had a national tennis ranking into her eighties.

Through marriage, Taft was part of electoral politics much of her life. Her husband, SETH C. TAFT, was a grandson of a U.S. president. The Taft family had been an Ohio Republican Party dynasty dating to the late-19th century.  An extravert with a large network of friends (her Christmas card list eventually ran to more than 1,000 names), Franny Taft was a unique asset to her husband’s political career, which included a narrow loss to CARL B. STOKES in a 1967 campaign for mayor of Cleveland. The post-election photo printed in Time magazine of Mrs. Taft presenting flowers to Shirley Stokes, the victor’s wife, became a symbol of community healing at a charged moment.  Though the Tafts had stayed up awaiting the election results until 4:00 a.m., Mrs. Taft, with typical pluck, showed up for work at CIA at 8:15 a.m. later that morning to teach her scheduled art history class. 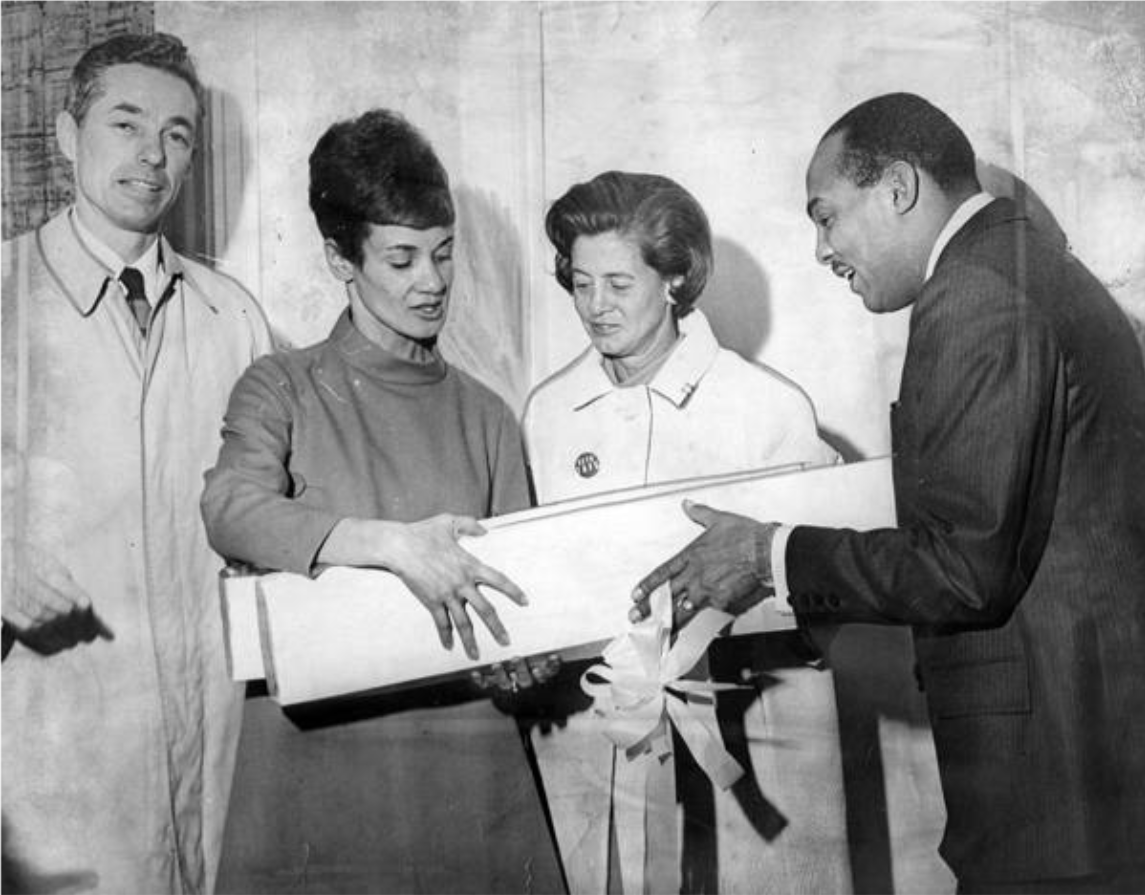 Cleveland Memory
Frances Taft (in light coat) presents a box of roses to Shirley Stokes, wife of mayor-elect Carl B. Stokes, congratulating her on her husband's successful election, 1967

Born Frances Bradley Prindle, Taft grew up in New Haven, Connecticut. The family spent summers nearby at Pine Orchard in the town of Branford on Long Island Sound. For the rest of her life, Pine Orchard was a cherished place for family gatherings. Her father, a stock broker, lost most of the family money in the Market Crash of 1929 when Franny was seven years old. Soon after, he suffered severe depression requiring a series of hospitalizations.  In her memoir, Sketches from Life, Taft cited this early hardship as especially formative, instilling in her a drive for success.  She remembered that, with the family in reduced circumstances, “we had to work for what we wanted, and we did.” From girlhood, she thrived on competition and activity.  “I’m really a doer,” she reflected late in life, “I always wanted to be in what the heck was going on.”

Her record at Vassar, where she graduated with a degree in biology and a minor in art history, is a case in point.  As an undergraduate, she was elected to Phi Beta Kappa in her junior year, was a head of student government, was president of the athletic association, and earned varsity letters in six sports, including tennis.  In later years, Taft served on a succession of Vassar fundraising and reunion committees and as president of the Vassar Club of Cleveland.  Eventually she became head of the Vassar alumnae/i association and then, for 13 years, was a trustee of the College.  In 2001, Taft received the inaugural award for Outstanding Service to Vassar College.
Taft’s presidency of the alumnae/i association (1966-1972) spanned a contentious period in the College’s history, when Vassar was studying the possibility of merging with Yale.  To the consternation of many Vassar alumnae, who inundated the association president with letters and phone calls, the proposed merger would have meant abandoning the Poughkeepsie, New York campus and moving to New Haven.  After a year-long Vassar-Yale Study, the proposal was dropped and Vassar opted to stay put. In 1969, Vassar began admitting male students.

Frances Prindle and Seth Taft were married in June 1943. It was wartime, and both newlyweds were officers in the U.S. Navy, the bride having joined the WAVES, the women’s Naval Reserve program, a year earlier.  After the war, the reunited couple settled in New Haven where Mrs. Taft, taking advantage of the G.I. Bill, did graduate work in art history at Yale. The Tafts also began a family; in 1945 the first of their eventual four children was born.

In 1948, the Tafts moved to Cleveland where Seth Taft joined Jones Day, a leading law firm. Franny Taft’s first job was at Laurel School, as a substitute biology teacher. According to her memoir, she was initially called upon to teach two rather divergent topics: dinosaurs and sex education. In 1950, she began teaching at CIA.
Taft died at home on Mother’s Day, 2017 of congestive heart failure. She was 95. She is buried next to her husband at LAKE VIEW CEMETERY.