Weaving a Rich Story Through Research 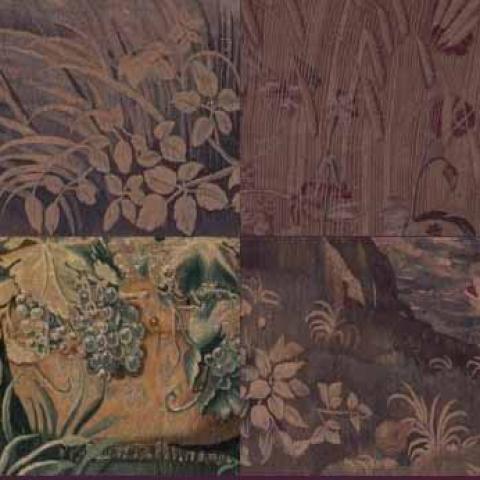 Case Western Reserve University alumna Julia LaPlaca (GRS ‘19, art history and museum studies) has traveled the world studying tapestries. But the tapestries’ journeys, not her own, fueled a passionate discussion at Kelvin Smith Library during Homecoming and Reunion weekend in October.

LaPlaca returned to campus (and the library where she was previously a student worker) to present “Art for Every Season: The Ginn Family Collectors in Cleveland’s Golden Age” about the Cycles of Life: The Four Seasons Tapestries exhibit at the Cleveland Museum of Art (CMA). The tapestries that LaPlaca studied while at Case Western Reserve are thought to be around 350 years old, and likely began their journey in Belgium before making their way to France, New York and eventually, Cleveland.

Her discussion focused on the history of tapestries and the American leg of the Four Seasons’ journey. It was Cleveland-area art and music patrons Frank Hadley Ginn and his wife Cornelia Root Ginn whose private collection brought the tapestries to Ohio. They were displayed in the couple’s Gates Mills’ estate for many years, at a time when other iconic American families like the Rockefellers, Hearsts and Biltmores were also furnishing and designing their homes with a nod to the Middle Ages and Renaissance. After the Ginns passed away in the 1930s, their art collections—including the Four Seasons—found new homes.

“A lot of these items went to the Cleveland Museum of Art, others were sold by their children, and that money became the beginning of the Frank Hadley Ginn and the Cornelia Root Ginn Foundation, which is now shepherded by the Cleveland Foundation” said LaPlaca. “Their legacy is still supporting services in Cleveland through the foundation.”

LaPlaca says tapestries are very fragile. Light, dust and pests are all enemies of the wool, silk, gold and silver used to create them. When CMA received the Four Seasons it was disfigured and weakened by time, and could no longer be safely hung—so it remained in storage. That was until 2007 when an expert survey of CMA’s tapestries revealed several pieces were worthy of conservation, especially the Four Seasons, which represents one of the only complete sets of this once-popular tapestry design.

LaPlaca was earning her master’s degree at Case Western Reserve during the latter part of the museum’s tapestry conservation project and interning in CMA’s textile conservation lab. Robin Hanson, conservator of textiles at CMA, asked LaPlaca to conduct research on the Four Seasons with the foresight that they would eventually be on display. LaPlaca spent nine months researching the tapestries, tracing their movements around the globe and cataloging records about them.

The tapestries were still undergoing conservation in Belgium when LaPlaca graduated from Case Western Reserve in 2019 but she returned to view the conserved pieces when they were back in the United States. Years later, the conservation team at CMA reached out to LaPlaca and asked her to write an essay about the Four Seasons for a gallery booklet to accompany the opening of the exhibit that was years in the making.

“I got to continue to work with the tapestries and CMA even though I was no longer an official intern, “said LaPlaca. “It was very gracious for them to bring me into this other part of the curatorial process, beginning to write about these objects for the public.”

LaPlaca’s talk during Homecoming coincided with the exhibit Autumn Harvest: Books on Wine from Collector Frank Hadley Ginn that is currently on display in the library’s Special Collections reading room through January 2023. It ended with a walking tour from the library to CMA to view the tapestries in person. She says she is humbled by the opportunity.

“It’s an unexpected privilege,” said LaPlaca of being asked to return to Case Western Reserve to lead a presentation at Kelvin Smith Library. “I love working with the public, the museum public, students—I have students now, I teach a little bit, and it’s so exciting to introduce people to things that I think are really exciting.”

LaPlaca will spend the next three to four years researching, interning and traveling to Northern Europe as she works toward her PhD in the History of Art at University of Michigan. But, Cleveland’s cultural significance—made possible by early supporters such as the Ginn’s and others—continue to inspire her.

“I’m kind of a Cleveland proselytizer,” smiled LaPlaca. “I’m always telling my art history colleagues, ‘go to Cleveland,’ they have an amazing collection of art!”