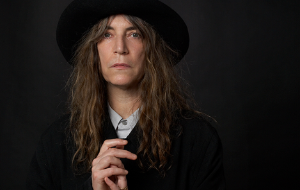 Patti Smith is a legendary American writer, performer and visual artist. She first gained recognition in the 1970s for her revolutionary mergence of poetry and rock music. Her seminal album Horses has been hailed as one of the top 100 albums of all time. In 2010, Smith won the National Book Award for her memoir, Just Kids, the moving story of her relationship with photographer Robert Mapplethorpe in the late ‘60s and early ‘70s. Smith was inducted into the Rock and Roll Hall of Fame in 2007. Her latest book is the memoir M Train.

Patti Smith will be interviewed onstage by Maureen Corrigan, one of America’s most distinguished book critics. For more than 20 years, Corrigan has been the book critic for National Public Radio’s Fresh Air. Her reviews have been published inThe Washington Post, The Village Voice, The New York Times and The Boston Globe, among other publications. Corrigan has authored two nonfiction books, Leave Me Alone, I’m Reading and So We Read On: How the Great Gatsby Came to Be and Why It Endures, which was named one of the 10 best books of the year by Library Journal.

Lecture is SOLD OUT.