Sing a Song for the Holidays

The holiday program features two of our favorite vocalists - Evelyn Wright and Vanessa Rubin - and introduces Ava Preston. We'll have plenty of Christmas fun - some Ellington "Nutcracker," the CJO annual burning "Little Drummer Boy," then our favorite singers will offer some holiday comfort, along with some Tadd Dameron and Temptations. 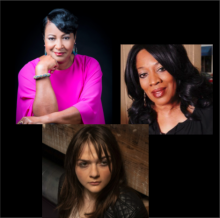 Ava Preston is a 16-year-old vocalist and songwriter from Cleveland, Ohio. She is a seven-time National Downbeat Student Music Award Winner for best Vocal Jazz Soloist in 2021, 2020, 2019, 2018 and best Pop/Rock/Blues Vocalist and Outstanding Performance in 2021, 2020, 2018. Ava has performed at local venues including The Bop Stop, BluJazz+, Nighttown, and the Rock and Roll Hall of Fame, to name a few, and she has performed as a guest singer at a number of national venues including Birdland Jazz Club. Ava believes music is a universal language that can unite people and promote acceptance of differences around the world.

Evelyn Wright has been a professional vocalist for over twenty-five years, with experience in jazz, R&B, and pop music. A native of Cleveland, she was voted Best Female Vocalist in 1985 at WCPN Radio. Wright was also named the Winner of Most Promising Female Artist and Favorite Female R&B Singer at the 1993 Midwest Urban Music Awards. In 2008, she was presented the Jazz Legend Award at the Tri-C Jazz Fest. Throughout her career, she has toured across the United States and Canada with artists such as Mel Tormé, Joan Rivers, and Harry Belafonte, but she loves performing in Cleveland.

Revered as both a torchbearer and a storyteller, jazz vocalist Vanessa Rubin possesses a voice hailed for crystalline clarity, hearth-like warmth and playful lioness sass. The Cleveland native brings a wealth of diverse influences to her vocal performance from both the Trinidadian/Caribbean roots of her mother and traditional jazz by way of her Louisiana-born father. Rubin’s passion for rich musical stories is illustrated throughout her eight albums, which include collaborations with musicians such as Frank Foster, Cecil Bridgewater, Kenny Burrell, Grover Washington, and Don Braden. In addition to singing, she’s also turned to writing and acting. She continues to be a favorite at jazz clubs and festivals here in the U.S. and abroad. Her work as a producer and educator/clinician with youth in communities as well as in educational institutions worldwide is ongoing.