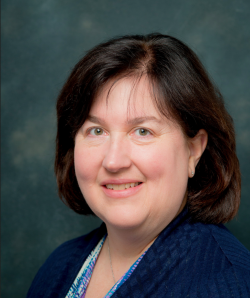 Dr. Amy Wilson-Delfosse received her Bachelor’s degree in Chemistry from The College of Wooster in 1986 and her Ph.D. in Pharmacology from Vanderbilt University in 1991.  After a postdoctoral fellowship at the Weis Center for Research at the Geisinger Clinic in Danville, Pennsylvania, she joined the faculty of the Department of Pharmacology at Case Western Reserve University in 1998.  She is currently Professor of Pharmacology and has pursued research in the area of Ras-related GTPase biology and Parkinson’s Disease. Her work in this area has been funded by the NIH, the National Parkinson’s Foundation, and the Michael J. Fox Foundation.

Dr. Wilson-Delfosse initiated her leadership career in the realm of medical education in 2004 when she was appointed to an oversight position of the basic science medical education curriculum and was one of a core group of faculty responsible for leading the Western Reserve2 Curriculum reform.  In 2009, she was named as the Assistant Dean for Basic Science Education and the Director of the Case Inquiry (IQ) program of this new medical education curriculum and in 2014 was appointed as the Associate Dean for Curriculum.  She has a particular interest in developing strategies to promote integration of basic science into the clinical decision-making process and has served as the Senior Director of Aquifer Sciences (www.aquifersciences.org) since 2016.  Dr. Wilson-Delfosse has served nationally as the secretary/treasurer of the Division of Pharmacology Education of the American Society for Pharmacology and Experimental Therapeutics (ASPET) and internationally as the president of the International Association of Medical Science Educators (2011-2015). The Association of American Medical Colleges recognized Dr. Wilson-Delfosse’s accomplishments in medical education with the prestigious Alpha Omega Alpha Robert J. Glaser Distinguished Teacher Award in 2012.