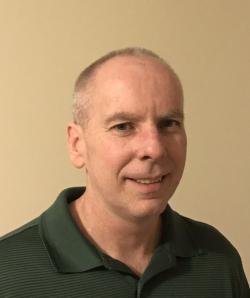 Tom Kelley received his B.A. from the College of Wooster in 1988. He attended the University of Notre Dame where he was awarded his Ph.D. in Biochemistry in 1993. Dr. Kelley came to CWRU in 1993 where he worked as a postdoctoral fellow in the laboratory of Mitchell Drumm, PhD.

Identifying a mechanistic link between the loss of CFTR function and altered cell-signaling control in CF airway epithelial cells – We have identified a number of cell regulatory changes in CF that impact processes such as inflammation and proliferation including increased RhoA-mediated signaling, reduced IFN-γ/STAT1 activation, and reduced NOS2 expression. We have also identified that intracellular processing of cholesterol is impaired resulting in increased de novo cholesterol synthesis that is related to pro-inflammatory signaling. We currently examine the role of microtubule function and stability in regulating intracellular transport. We have shown that CF phenotypes of reduced growth and weight gain and excessive inflammation in response to bacterial infection can be reversed in mouse models of CF by inhibiting the tubulin deacetylase HDAC6.  The signaling mechanisms linking CFTR function to microtubule regulation is also examined.

Identifying targets of pharmaceutical intervention to treat cystic fibrosis - The signaling studies above identify potential sites of therapeutic intervention to restore normal regulatory processes in CF cells. We are currently exploring statins and HDAC6 inhibitors as potential therapeutic options in CF models. We also are interested in examining the mechanisms of existing therapies such as ibuprofen to identify alternative approaches to anti-inflammatory therapies with fewer side effects.

Mechanisms of MIRAGE syndrome – MIRAGE syndrome is a rare genetic disease that affects T cell production and infection control, growth, adrenal function, and intestinal inflammation.  MIRAGE syndrome is caused by mutations in the SAMD9 gene, but little is known about the cellular consequences of SAMD9 mutations other than a disruption of endosomal fusion.  We are exploring specific mechanisms related to intracellular transport and autophagy to more fully understand the cell biology associated with MIRAGE syndrome.