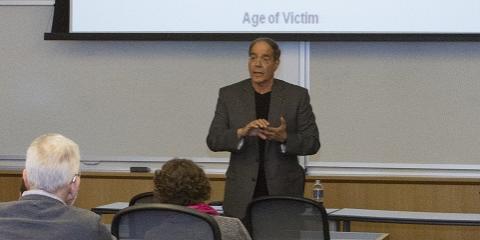 The Police Assisted Referral (PAR) program is an evidenced-informed collaboration among the Cuyahoga Metropolitan Housing Authority (CMHA) Police Department, Beech Brook, Frontline, the Partnership for a Safer Cleveland, and the Begun Center for Violence Prevention Research and Education.

The initiative focuses on children and their families, with particular emphasis on individuals who have experienced violence, either as a witness and/or victim. PAR creates a conduit for CMHA police officers to connect a large (and far too often ignored) number of violence-exposed youths and their families to MHS for services, including education, screening, and treatment.

By identifying violence-exposed children and adults and providing quality early intervention services, numerous research studies have demonstrated that the likelihood of their committing violent acts in the future is significantly reduced, and their abilities to succeed in school and work are greatly enhanced.

How the PAR Program Works

An officer on patrol encountering a resident in need dials a central number and provides a resident’s contact information, along with basic information involving the circumstances and situations facing the individual or family.

Then, within 24 to 48 hours, Cuyahoga County’s Mental Health Services, Inc. – now called FrontLine – reaches out to the person in need, inquiring as to the status of the issue, the need for immediate interventions or further referrals, and whether the individual would like a Frontline representative to come out to the home for further assistance.

A Fundamental Change in Perspective

Funded for the past two years by the Robert Wood Johnson Foundation, the Cleveland Foundation, the Saint Luke’s Foundation, and the Sisters of Charity Foundation, PAR is a program with the potential to fundamentally change the attitudes, interactions, and relationships between a neighborhood and the police protecting and serving it.

Principal Investigator, Mark Singer, who frequently accompanies CMHA police units out on patrol – assessing the program and ensuring it’s working right – cites data culled from surveys of individuals who received PAR services, surveys conducted over a two-year period that ultimately asked a fundamental question: As a result of PAR, how has your opinion of police officers changed. The results:

“Over a third of the respondents said that their opinion of the police improved through their participation in the PAR program,” he says. “We hear neighborhood residents saying things like, ‘The officer saved my life’ and ‘It’s nice to know that you can count on the police for more than just arresting.’”

He also notes that the PAR program has also proved exceptionally helpful in boosting police morale.

“Police officers love it,” says Dr. Singer. “We did two focus groups with police – one before their participation in PAR and then one after – and what we hear from them is very encouraging. They say, ‘I can sleep at night, now. I’d have to leave these events saying, Well, you know, I arrested him, but man, that family is in deep trouble. Now, I know I got the family, or can get the family, help. And it takes me sixty seconds. I phone in. Give the name. The service follows up. And I’ve helped someone.’”

The other thing that officers cite is the new relationship they experience with the people they’ve helped; citizens stop them on the street now to thank them for pointing them in the right direction. Thank them for helping them get help.

“And this is happening in the most dangerous neighborhoods in the city,” says Dr. Singer, “with citizens who are often the most alienated and the poorest who often distrust police. That’s the amazing part.”

The program is a new and permanent way of policing where CMHA officers responding to violence-related service calls are trained to identify eligible individuals and families in need of these services, explained CMHA Chief of Police Andres Gonzalez. Police respond to roughly one thousand calls that deal with domestic violence in the household — violence that children witness. By providing help early, it is hoped that violent crime will be reduced.