The Fugitive Safe Surrender (FSS) program is a unique, creative, and highly successful initiative that encourages persons wanted for non-violent felony or misdemeanor crimes to voluntarily surrender to the law in a faith-based or other neutral setting. The Begun Center had provided evaluation services for the FSS program and been onsite at over 20 FSS operations since 2006. 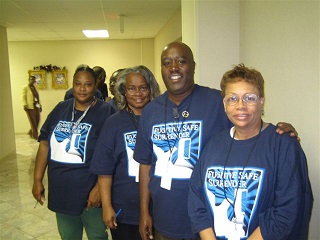 Image right: Volunteers in Memphis, TN help ease the anxiety of leaving a life on the run. – Photo courtesy of the U.S. Marshals Service

The program started in the wake of the death of Cleveland Police Officer Wayne Leon who was killed in the line of duty in 2000, shot during a routine traffic stop, murdered by the driver who had an open warrant and didn’t want to go back to prison. The driver shot Wayne Leon as the officer approached the vehicle. Officer Leon’s death was the prompt for what has resulted in a model where police officers could safely interact with people in the community who have open warrants in a secure way and in a non-confrontational environment, thus avoiding this kind of tragedy. And the best location to try and create such an environment, they surmised, would be a church.

The program was originally managed nationally by the United States Marshals Service and is currently funded and managed through Ohio’s Attorney General’s Office. FSS is a community re-entry program for wanted non-violent offenders and offers individuals with felony and misdemeanor warrants the ability to turn themselves in to law enforcement and have their cases adjudicated in a safe and non-violent environment. 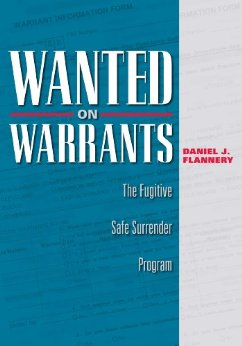 When considering the scope — the ideal of the objective, the collaboration, the spirit, the logistics — it’s difficult to distinguish what is most impressive regarding the various dynamics of the Fugitive Safe Surrender (FSS) program.

Foremost, perhaps, is the collaboration among the various quarters of a city neighborhood, a synthesis that often becomes an inspiring message of communal can-do. Then there’s the logistics, in itself a small miracle of bureaucratic bridge-building across platforms and technologies, eventually becoming unified in its strive for accuracy and efficiency. And these bridges extend to the spirit of community ministry and volunteerism as well, a spirit that brings folks out as kind voices and guiding hands.

"Wanted on Warrants" – a slender volume blending empirical data, academic observations, media coverage, participant testimony, and Dan’s own first-person account of being a part of the process from conception to fruition – also serves as a guideline to other communities who might likewise seek to implement the program.

“Fugitive Safe Surrender is a way to take the desperation out of the situation and interaction that people with open warrants could have with law enforcement. And that’s why and how the program started here in Cleveland. People talk historically about the sanctuary of the church and ministers play a significant role in most people’s lives. So if you set something up and invite people to appear at a church, they are more likely to believe that that will be a safe place and that it’s not some kind of ‘trick’. So we tried it here in Cleveland at the Mount Sinai Baptist Church in August of 2005. And over 800 people showed up the first time. And we thought, maybe we really have something here," noted Dr. Flannery. 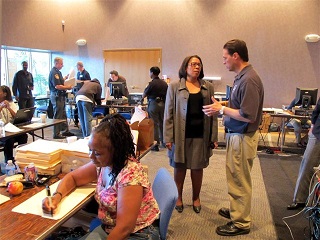 “The program is really driven by by the community, neighborhoods wanting to improve law enforcement and community safety. A secondary benefit has been the relationships built between law enforcement, the faith community, and local providers."

Perhaps the greatest surprise in most of the FSS program sites has been the large number of people who choose to stand in line, whatever the weather, to take care of their outstanding warrants. One of the questions that arises: Why come clean now? Why, when you have seemingly, successfully evaded the law’s reach, stand in line and wait to clear your name? Individuals participating in the FSS program have responded, and the answer most often comes down to: ‘I was tired of running.’ They wanted to get their lives back. They were tired of looking over their shoulder.