Where to now, Congressman Lewis?

The unrest in Portland takes a marked downturn late at night, from peaceful protest to confrontation and destruction of property, fueled by the unwanted aggressive tactics of undefined federal troops. Even the mayor of Portland was teargassed, unprovoked as he participated in a peaceful protest.

Unidentified agents from at least four different federal departments have descended uninvited on Portland. They are inciting violence by throwing flash grenades, smoke bombs and teargas, chasing and beating retreating peaceful protestors. Everyday citizens fear going out at night as troops sweep the streets at night and kidnap peaceful protestors into unmarked vehicles. The United Nations human rights office has issued a warning to US authorities over their disproportional force against protestors and journalists.

Now Seattle and other cities are also seeing more volatile forms of protests and property destruction, which some are calling riots. While overstated, different groups with their own agenda and tactics might be provoking the late-night disturbances. This can make concerted change more difficult. 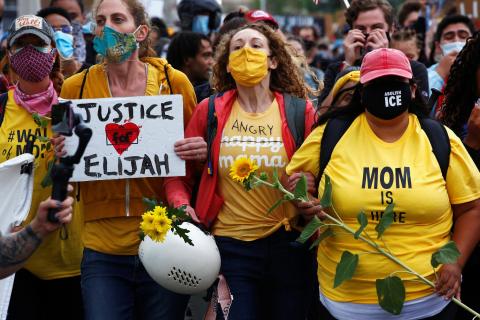 Violence begets violence. Anti-government protests and unrest might spiral out of control across the country. Intending to quell the violence, the Trump administration’s violent countermeasures are provoking more aggressive actions by the protestors and attracting more people who are seeking confrontation. The federal government has lost its moral standing and has not made any attempts to engage in dialogue or negotiations with the protestors during the day. Instead, the political motivation behind the government’s actions is front and center.

What would Congressman John Lewis recommend now? He began his work in civil rights by being trained in nonviolence. He never wavered from this stance, even though he was arrested over 40 times and beaten numerous times by police. Congressman Lewis’ resolve to get in “good trouble” continued on the floor of the Congress, where he staged sit ins, walk outs and other ways of protesting injustice.

Who will be the bearers or nonviolence today?

In his first network interview after the death of George Floyd, Congressman Lewis spoke of the protests across the country. He said, “It was very moving to see hundreds and thousands of people from all over America and around the world, taking to the streets and the roadways, to stand up, speak up…to get in what I call ‘good trouble.’ During the ‘60s, the great majority of us accepted the way of peace, the way of love, philosophy and discipline of nonviolence as a way of life, a way of living. There’s something cleansing, something wholesome, about being peaceful and orderly. To stand up and with a sense of dignity and a sense of pride and never hate. As Dr. King said over and over again, ‘Hate is too heavy a burden to bear.’ The way of love is a better way. And that’s what we did. We were arrested. Yes, I was beaten and became unconscious but we never gave up. I believe that somehow and some way if it becomes necessary to use our bodies to help redeem the soul of the nation and that we must do it, create a society at peace with itself.”1

Our country’s identity and soul are being called into question. Systems of oppression and inequity are being challenged anew. This is an opportunity for transformation. Will we stand up to repressive measures with nonviolence? The Wall of Moms and Don’t Shoot Portland are new examples of peacefully standing up to state violence. They have sued the federal government for its attempts to stamp out peaceful and constitutionally protected protests and for its unconstitutional presence as a federal domestic security force in Portland.

How will we continue to work for change in our community, even as the Trump administration promises to send federal troops to Cleveland and other cities? Can we strengthen nonviolent movements that speak truth to power? Can we develop alternative responses to calling the police for non-criminal concerns? Will this moment be known for the erosion of civility and the loss of a moral compass or will this be when we established, for the first time, a shared commitment to racial justice and equity as a society?

Just before passing, Congressman Lewis wrote, “Though I may not be here with you, I urge you to answer the highest calling of your heart and stand up for what you truly believe. In my life I have done all I can to demonstrate that the way of peace, the way of love and nonviolence is the more excellent way. Now it is your turn to let freedom ring.” “When historians pick up their pens to write the story of the 21st century, let them say that it was your generation who laid down the heavy burdens of hate at last and that peace finally triumphed over violence, aggression and war. So I say to you, walk with the wind, brothers and sisters, and let the spirit of peace and the power of everlasting love be your guide.”2