A residents self-organized community initiative about baking and sharing 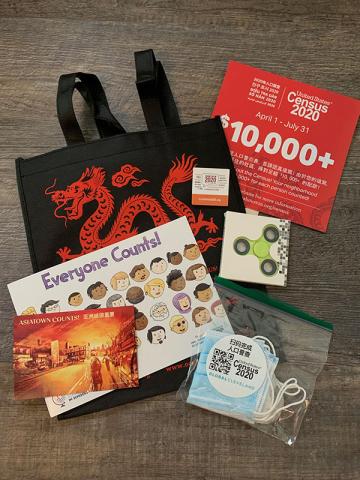 As an immigrant community, AsiaTown Cleveland has been adversely affected by the pandemic. While residents are facing unemployment and may not be able to claim unemployment insurance, language barriers and the need for food add additional challenges to the community. Despite all of these challenges, one group of AsiaTown residents took the hard times of the pandemic, added some time, flour, sugar, and a whole lot of love, and built up their community.

The State "Stay-at-Home" order allowed many people to spend more time with their families. As time passed, four moms (Christy, Jojo, Winni, and Ying) in AsiaTown decided to pursue their new hobbies and discovered their talent for baking. In early May, MidTown Cleveland AsiaTown Community Organizer, Xinyuan Cui was inspired by the baking of the four moms on WeChat, a social media platform that is very popular among the Chinese community. Cui then contacted each of them to ask if they would like to share their baking talent with their community. This coincided with the start of the Neighbor Up COVID-19 Rapid Response Grants from the Cleveland Foundation, a community fund for grassroots neighborhood civic groups, small nonprofit, and faith-based organizations to promote community connectedness during COVID-19. The moms recognized the meaningfulness of sharing during this difficult time, and together with Karis Tzeng, Midtown Cleveland AsiaTown Project Manager, and Cui, applied for the grant and received the funds.

With Cui's facilitation, they kicked off the first video meeting on May 11. A community project about homemade baking desserts and spreading love was launched and officially named "AsiaTown Sweetheart”, a play on words of the Chinese translation of “dessert.” This is the first community project that was initiated by AsiaTown residents. Behind the name "AsiaTown Sweetheart" is the hope of the four moms that the residents will not only receive homemade baking desserts but also feel their sweet and warm hearts.

During the pandemic, baking desserts has been a way for the moms to show love to their families. From the focus of individual residents to the community as a whole, the moms wish to model a way of spreading joy and encouragement to others so that neighbors can watch out for each other in this difficult time. Ying, one of the moms who works at a local restaurant, shared with Cui, "I would like to be part of this project…helping others has proved my value in life. I have been helped." 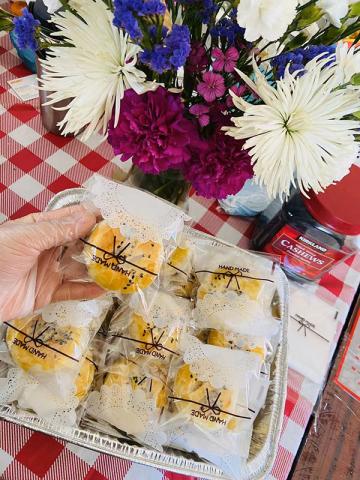 The four moms brainstormed and worked together since the day "AsiaTown Sweetheart" was launched. With assistance from the AsiaTown Team, it only took the moms a month to complete the project. It included conceiving and launching the project, applying for funds, and making and delivering homemade baked desserts. AsiaTown residents could scan the WeChat code or make a phone call to sign up for homemade baked desserts for themselves or neighbors. The moms were concerned that some residents could not take too much sugar or chew hard food, so they discussed offering two homemade baked dessert options: Taro pastry, a popular dessert in traditional Chinese cuisine, and Sponge cake, a softer dessert with less sugar. They also prepared care packages for community members that contained masks and gloves as well as encouraging notes.

Over the weekends of June 13-14 and June 20-21, the four moms made 280 desserts (including 140 taro pastries and 140 sponge cakes). With the help of eight volunteers, they delivered those desserts and care packages to 150 registered residents, workers, and 26 small community businesses in AsiaTown. Residents and small businesses who received the homemade baked desserts and care packages expressed appreciation to the four moms and praised the desserts' delicacy. "Though the dessert is small, the thoughtfulness is great. My children are not around. I am so happy to receive the cake," said an elder who lives in the Asian Evergreen apartment.

There is a Chinese saying, "Better is a neighbor who is near than a family member who is far away." It refers to the close relationship between neighbors. During this pandemic, the AsiaTown community experienced the truth of this saying through the care packages and desserts lovingly provided by Christy, Jojo, Winni, and Ying.

"AsiaTown Sweetheart" has also helped the AsiaTown team to connect with hundreds of residents. In a short time, a beautiful friendship was formed between the AsiaTown team and the four moms. At the project debrief meeting, the moms shared happy memories of fishing by the lake and playing with their children. The whole meeting period was filled with the joy of initiating and participating in "AsiaTown Sweetheart." The moms also said it is a blessing to bring happiness to their community by sharing their talents for baking desserts. It also brought human connections and interactions during the pandemic. They would love to see more of these kinds of community projects and hope that more residents will participate in the future.

Tzeng and Cui from the MidTown Cleveland AsiaTown Team, as well as Christy, Jojo, Winni, and Ying, were thrilled with the results of this community-building project, and hope it will be the first of many resident-led initiatives in the AsiaTown neighborhood. If you have a project or initiative in AsiaTown that you’d like to explore, please contact them at xcui@midtowncleveland.org.