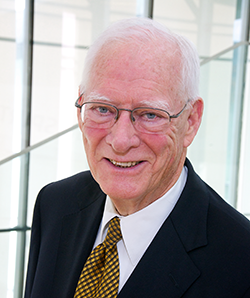 Dan Clancy is a Cleveland native, and a graduate of St. Edward High School in Lakewood. He received his undergraduate degree from the University of Notre Dame in South Bend, Ind. Following his graduation from Western Reserve University's law school, he served as a special agent for the Federal Bureau of Investigation (FBI) from 1962-1965. Included in his assignments was the march of the Rev. Dr. Martin Luther King Jr. and civil rights activists from Selma to Montgomery, Ala., in the spring of 1965.

Clancy served as an associate dean at the School of Law before being named executive director of The Alumni Association in 2006.

Clancy spearheaded the campaign to plan, develop and build The Alumni House, a gathering place for all alumni to meet, network, socialize, conduct business and have a home away from home.