Find out what made 2016 so sweet, and sometimes bittersweet, at CWRU

‌‌‌We’ve compiled some of this year's stories from the campus of CWRU. These news stories originally ran in The Daily, CWRU's e-newsletter for faculty, staff and students.

On the Cutting Edge:

In the Community and Around the World:

In Pop Culture and On the Field:

Two members of the Case Western Reserve University community joined Ellen DeGeneres, Bruce Springsteen, Michael Jordan, and Bill and Melinda Gates last week, as part of the final class to receive the Presidential Medal of Freedom from President Barack Obama. Richard Garwin (CIT ’47, HON ’16) and Frank Gehry (HON ’13) were among 21 artists, athletes and innovators to receive the award from President Obama. The Presidential Medal of Freedom is the highest civilian honor awarded, and is designated for individuals who make significant contributions to “the security or national interests of the United States, to world peace, or to cultural or other significant public or private endeavors.”

Garwin was recognized for his scientific contributions to society and work in defense and intelligence technologies throughout a decades-long research career. After graduating from the Case Institute of Technology, Garwin completed his PhD in physics at just 21 years old under the guidance of physicist Enrico Fermi at the University of Chicago. Early in his career, Garwin spent summers at the Los Alamos Scientific Laboratory, where he played a key role in developing the first hydrogen bomb. A longtime scientific adviser and defense researcher, President Obama described Garwin as “an architect of the atomic age.”  Garwin has advised nearly every president since Dwight D. Eisenhower.

Beginning in 1958, Garwin consulted the newly established President’s Science Advisory Committee and served as a member of the committee from 1962 to 1965 and 1969 to 1972. In 1952, Garwin began working at IBM’s research laboratory, where he worked on such projects as low-temperature and condensed matter physics and in nuclear magnetic resonance. He later served as the company’s director of applied research, director of the Thomas J. Watson Research Center and an IBM fellow, a position he held from 1967 through his official retirement in 1993. As a fellow, Garwin made contributions to various modern technologies, including touchscreens and laser printing.

Garwin has 47 patents and more than 500 publications to his name. He was elected into the National Academy of Sciences, National Academy of Engineering and the Institute of Medicine, and received the Enrico Fermi Award and National Medal of Science from the U.S. government. Earlier this year, the university awarded Garwin an Honorary Doctor of Science for excellence in his field. 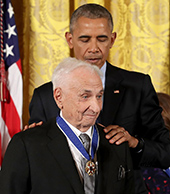 After the 2010 World Architecture Survey was released, Gehry was dubbed the “most important architect of our age.” Gehry has been recognized for his work with the Pritzker Prize in Architecture, the National Medal of Arts and the Cooper–Hewitt National Design Award for Lifetime Achievement. He, alongside his longtime friend, the late Peter B. Lewis, received honorary doctorates from Case Western Reserve in 2013.

Final Installment of Our Three-Part Podcast Available in December

While on campus, this year’s Alumni Awards recipients sat down to discuss their achievements. These conversations are featured in a three-part CWRU Spotlight Podcast.

Listen to the Podcasts 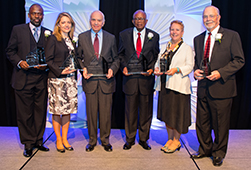 Describe your volunteer activities through CWRU:
I’m currently involved with SOTC. In the past, I’ve been a member of the Case Alumni Council and over the years have also participated as an [alumni admission] ambassador for CWRU at high school college fairs.

What volunteer activity are you most active/excited about and what is your favorite moment/experience from volunteering?
The most exciting part of volunteering as an alum is meeting the current students and hearing about the wonderful things they are doing. It’s always a very impressive list of activities and accomplishments!

How many hours does this volunteer activity take up per week or month?
SOTC is up and down. At its height, it was 4 hours/month. Most of the year, it’s an hour or less. When I was serving on the CAA council, the time commitment was closer to 4 hours/month with a few more hours required for special events (e.g. scholarship interviews).

How did you first get involved with volunteering?
I don’t remember the exact time when I started. For SOTC, it’s such a great concept and was a way to support both Case and Cleveland that I wanted to get involved. For CAA, I was the beneficiary of a scholarship when I attended Case and I wanted to give back in acknowledgement of the gifts that were given to me.

Why do you continue to volunteer?
It’s a great way to make an impact. The students are amazing and it’s good to get involved to interact and hopefully make an impact on the direction the school and students take.

What would you say to others who are interested in getting involved with this volunteer opportunity?
I’d encourage everyone to participate in a way that is meaningful to you. The rewards of participating will outweigh the costs and you’ll meet many amazing people along the way.

Get more information about Summer on the Cuyahoga 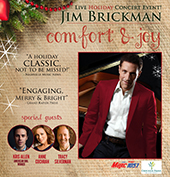 ‌The holiday season sparkles as CWRU alumnus Jim Brickman, renowned pianist, songwriter and recording artist, takes his music and charm across the country with his Comfort & Joy tour. In honor of his 20th holiday tour, Brickman will debut original songs for the season plus the hits that made him “America's Piano Sensation.” Joining Brickman will be female vocalist and fellow CWRU alumna Anne Cochran (WRC ‘83), electric violinist Tracy Silverman, and season eight winner of American Idol, Kris Allen. ‌‌

Alumni in the Cleveland area are cordially invited to Comfort & Joy: A Reception and Concert with Jim Brickman on December 22 at the landmark Severance Hall. This exclusive event begins with a complimentary reception in the Frank Hadley Ginn Suite, immediately followed by a performance.

If you can't make it to Cleveland, catch him on one of this many other tour stops. CWRU alumni are invited to reach out to Jim Brickman's team to meet with him after the show (wendy@jimbrickman.com).

Like a Christmas Villain Whose Heart is Two Sizes Too Small? 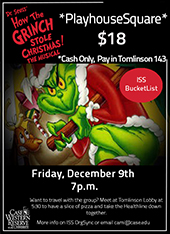 On Friday, December 9, CWRU's Center for International Affairs welcomes students, staff, faculty and alumni to Playhouse Square to see Dr. Suess' How the Grinch Stole Christmas! The Musical. The discounted event is part of the organization's Cleveland Bucket List.

Get Your Grinch On

'Tis the Season to Spend Time with Fellow Alumni...

12.9: Cleveland - Dr. Suess' How the Grinch Stole Christmas! The Musical

View the University and Alumni Relations Events Calendar for more upcoming events on campus and around the country.