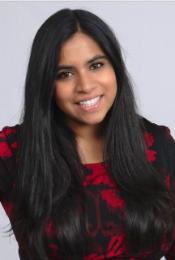 Originally from Pittsburgh, Aishwarya Arjunan (CWR’10) majored in Biology at CWRU and went on to the University of Pittsburgh, Graduate School of Public Health to receive a Masters in Public Health Genetics and Masters of Science in Genetic Counseling.  Arjunan currently lives in Chicago and works as a Genetic Counselor for Counsyl, Inc. She enjoys trivia nights and is an avid Pittsburgh sports fan. In addition to participating in the Alumni Admission Ambassador program, Arjunan volunteers as a CWRU INbassador, and is the president of the Chicago alumni chapter.

What volunteer activity are you most passionate about and what is your favorite experience from volunteering?

I love being an Admission Ambassador. I had such a positive experience at CWRU and made some of the best friends during my time there that I love the opportunity to share my stories and be a part of deciding the next generation of CWRU students.

How much time do you invest in the Alumni Admission Ambassador Program?

The best part about being an Admission Ambassador is that you can decide how involved you want to be (whether it be one interview a week or one a month). And you also have the flexibility of choosing who you interview. So you can either choose to interview someone that lives close to you or someone who is interested in majoring in your field. Interviews generally start around August/September and go until February/March so there is also downtime between interview seasons.

How did you first get involved with volunteering?

I worked at the Office of Undergraduate Admissions during my time at CWRU as a tour guide and student ambassador so becoming an Alumni Admissions Ambassador was just a continuation of my work during undergrad and sharing my positive experiences at CWRU.

Why do you continue to volunteer?

It's a great way to stay involved and I enjoy meeting prospective students and new alumni. It's great to have a network of individuals who share similar experiences and a love of CWRU.

What would you say to others who are interested in getting involved with this volunteer opportunity?

Just give it a try! It really does not take that much time out of your schedule and it's a great way to shape the next generation of CWRU students.

The Linsalata Alumni Center: A Great Place to Meet

Looking for a place to host a meeting, retreat or get together with friends? The Linsalata Alumni Center can accommodate your needs with our beautiful space and friendly staff. This facility is exclusive to the CWRU community and makes a beautiful venue for your special event.

My Solidarity Holiday in Kazakhstan

Bobby Withrow (MGT'15) works at ArcelorMittal, the world's leading steel and mining company, as a Shift Manager-Electrical Maitenance. This past summer Withrow was one of 60 employees selected to represent the U.S. in the Solidarity Holidays program. He was honored to travel to Kazakhstan with nine fellow employees and share his volunteering experience: 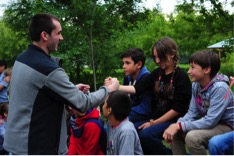 It is hard to put into words my experience during my Solidarity Holiday in Kazakhstan in 2015. It was an amazing experience and a truly life-changing adventure. It will be something that I remember for the rest of my life.

My experience started back in February when I decided to apply for the program. I thought that it would be a neat thing in which to participate. Then in March, I received word I had been accepted and would be going to Kazakhstan in July. I was both excited and apprehensive. The apprehension came from the fact that I had never traveled outside of the United States before.

As my departure date crept closer, I was becoming more nervous and more excited. I wasn’t sure what to expect once I arrived in Kazakhstan. However, once I arrived, I began to have a once-in-a lifetime experience. I met the other 9 volunteers from all over the world (Daniel from Brazil, Jasmin from Canada, Eric from South Africa, Choukri from Algeria, Patricia from Spain, Isabelle from France, Romain from Luxembourg, Irina from Romania, and Artem from the Ukraine), and we quickly became close, and by the end of the week, we had become a family. The people of Kazakhstan are unbelievably kind. In addition to their kindness, they are more open and accepting of people who are different than each other. This is something that I was not expecting, and was pleasantly surprised by it.

While in Kazakhstan, we spent a week volunteering at Fakel, a children’s camp where the children of the employees of ArcelorMittal Temirtau can spend 16 days of their summer. It was a lot of fun to interact with the kids. They were bright, enthusiastic, and funny. Over the course of the week, each of us volunteers gave a presentation about our countries to the 250 kids. During each presentation, the kids were smiling up at us, enthusiastic, and full of questions asking if the river that formed the Grand Canyon was still there and asking what the population of Spain was. The kids were eager to learn from us.

Two volunteers were assigned to a group of children. I was assigned to a group of kids who were 11-12 years old. During the week, we played sports with our kids, did some arts and crafts, made sure they had their food at meal times, and interacted with them. The kids always wanted to know about our countries and what we thought about their country. Each time my answer was always the same: Kazakhstan is a beautiful country with amazing people.

The first time we entered the camp and met the children, they were cheering for us. The put on a show of singing, dancing, and skits where we were the honored guests. They dragged us up from time to time to dance with them. During the week, there were other shows that the kids put on where we were participants. Dancing is one of the activities that transcends all cultures and can act as a way to bring everyone together.  All of us participated in choreographed dances, either as a group or alone. I performed with some of the girls from my group of kids to “Cotton-Eyed Joe.”

Part of the week involved us receiving a tour of ArcelorMittal Temirtau. Seeing what other people do with what they have is certainly eye-opening, both in good and bad ways.  While there, each of us volunteers also met with our counterparts. Through that exchange, I have gotten some ideas about things to implement back in Cleveland because Kazakhstan does some things better, and they in Kazakhstan got some ideas from me. This free exchange of ideas is something that we volunteers are doing as well: safety, training, and technical.

The closing ceremony was an emotional one for everyone: the volunteers, the camp counselors, and especially the kids. After spending a week with them, we had formed bonds with them. They were sad to see us go, and for us to leave them. The closing ceremony was a series of dances and funny skits again. No matter the culture, fun and laughter do not need to be translated.  During the closing ceremony, the other volunteers and I put on a little dance that we had prepared as a surprise for them. Parts of it were based upon traditional Kazakh dance. We wanted to show them that we had learned about their culture and wanted to show our appreciation of it.

I have been able to more deeply reflect on my experience in Kazakhstan since I have been back in the United States. Like I said earlier, it is hard to put into words everything about this experience. For one week, I was with colleagues from many different countries whose cultures, first language, and customs were different from my own. We all experienced the good work that ArcelorMittal is doing for the communities in which it exists, and how those investments are impacting the lives of thousands.

Would I ever want to participate in the Solidarity Holidays again? No. I could never have the same experience that I have already had, and nor would I want to replicate it.  I also want others to have a chance and to experience this for themselves. Something inside you changes for the better. And going through it with the colleagues, whom I can now call my friends, made the whole trip even more memorable. Team Yurta forever.