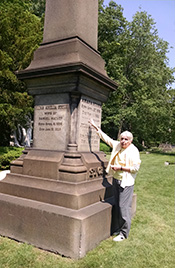 Sandra Vodanoff (FSM ’59) was born July 22—the same day Moses Cleveland’s expedition led him to the mouth of the Cuyahoga River in search of the capital of a new territory.

So, Vodanoff claims, she “was destined to love the history of the Western Reserve.” For years, Vodanoff worked at the Western Reserve Historical Society as a museum docent. The exhibit on Millionaire’s Row, (Euclid Avenue) led her to Lakeview Cemetery, where she currently volunteers as a guide.

Since her retirement in 1999, she has volunteered her time and talent in the Cleveland area, including serving as the last president of the Flora Stone Mather Alumnae Association.

“Our largest grant went to the Flora Stone Mather Center for Women, and I became part of the Community Advisory Board and the Flora Stone Mather Early Childhood and Family Service Center, which is part of the Goodrich Settlement House started by Flora in 1894,” Vodanoff recalls. “ The alumnae pay our respect to Flora as we remember her birthday on April 6, 1852, by placing flowers at her grave. As a child, Flora was sent out by her father, Amasa Stone, to give President-elect Abraham Lincoln a bouquet as he was passing through town. He reached down and kissed her.”

When not volunteering, Vodanoff takes classes with Senior Scholars and CWRU professors at the Cleveland College Club, which takes her back to her days at Mather College.

As an undergraduate history student, she met her architect husband, Nick Vodanoff (ARC ’55). They lived on Juniper Road in a married couples’ apartment after their 1959 wedding. “Instead of a plot in the cemetery,” says Vodanoff, “Nick and I have chosen to be remembered with a bench on the campus next to the new alumni house addition.”

When asked what traditions she celebrates for St. Patrick’s Day, Vodanoff explains, “On St. Patrick’s Day we would be at the grave of Ernest Ball, piano teacher and composer of ‘When Irish Eyes are Smiling’ and ‘Mother Machree’ with our green vodka Jell-O, singing to his mother buried under the ball with her son.” 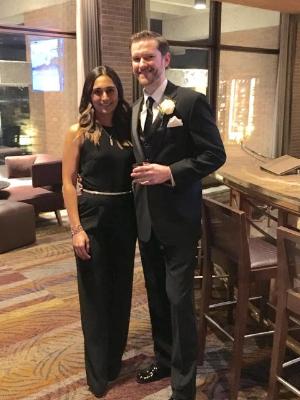 Matthew B. Shaughnessy (CWR ’09) currently lives in the Midtown area of Cleveland and works as a dentist at Cleveland Clinic Foundation Building. Shaughnessy and partner, Allysen Arbelaez (CWR ’10) an ENT physician assistant at the Cleveland Clinic, are looking forward to a trip to Ireland with the entire family.

We've heard you're planning a summer trip? Why Ireland?

[We’re] planning on renting a car and exploring as much of the beautiful landscape, not to mention people, as possible, just like the first trip eight months ago. My entire family has been to Ireland at one time or another, but we've never gone together. This year we're changing that. Ireland happens to be our blood, and home to the most altruistic people I've ever encountered.

How do you celebrate St. Patrick’s Day?

The Shaughnessy family celebrates St. Patrick's Day at Sean's Rhino Bar, the family owned pub of 20 years, where we gather to celebrate life in the form of "St. Baldricks." With the help of many friends in the south Chicago neighborhood of Beverly, IL, my family helps organize this pediatric cancer research benefit every year. At one point or another along the way, a Guinness or two is usually consumed as well.

What is your favorite CWRU memory?

[My] favorite memory about CWRU has to be the people, whether it was through men's soccer, Greek Life, or simply being Case nerds in KSL, that place has a remarkable tendency to introduce you to people that are both so similar, yet so different in beautiful ways that allow everyone to grow and enhance their well-being to the utmost degree. Meeting my future wife was pretty nice too. I stay connected by having chosen to willingly come back to Cleveland and participating in as many Alumni events as possible. It's hard not to find one around here. 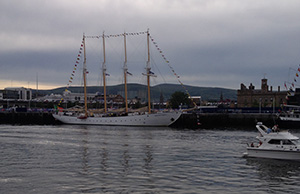 Selman Ozdan (LAW '11) resides in Belfast, Northern Ireland. He is a Ph.D. candidate in his final year at University Belfast, Law School. Originally from Turkey, today Ozdan enjoys discovering the culture of Ireland, the historic landscapes and the annual Maritime Festivals where international tall ships race. Ozdan explains,  “[t]here is a famous dock and pump house in Belfast. Many famous ships in history were built here, and the Titanic is one of them.”‌

Belfast is a great city located at the heart of Northern Ireland. This city hosts lovely green shades. When I was in the states, my local friends were telling me an expression: “April showers bring May flowers.” I modified this expression for Belfast as “April showers bring May showers.” Yes, we have rainy days but they never make you blue because this city always gives a warm welcome to you with its various birds and different green shades.

What about St. Patrick’s Day?

St. Patrick’s Day is one of the best social events in Belfast. I like to watch the fun carnival parade and other activities. I like to catch concerts and watch professional performers.

What CWRU experiences are you most fond of?

I remember we went to the Cleveland Indians baseball game with Adria Sankovic* (rest in peace, she was like a mom for us). It was the first baseball game for me and heavy rain started in the middle of the game. The game was cancelled and our first baseball experience ended before it began. We did not watch the whole game but we had long conversations with friends[while] watching heavy rain.

Another great memory from CWRU [was when] professor Freda Levenson invited us for Halloween at her place. When we arrived at her home, I was surprised because the Halloween decorations were flawless. It was like a 3D movie and I had a role. It was the best Halloween night for me thanks to Freda Levenson.

* Adria Sankovic, Assistant Director of Foreign Graduate Studies for the Masters of Laws program at CWRU, passed away December 27, 2014. The LLM degree program at Case Western Reserve School of Law offers a competitive, yet nurturing, learning experience for foreign graduates who are ready to meet the challenges of law practice in a global economy.

Nominations submitted before May 30 will be included in consideration for 2016 awards. Recipients will be honored and receive their award on campus at the alumni awards luncheon hosted during homecoming/reunion weekend October 13-16.
Visit: Alumni Awards