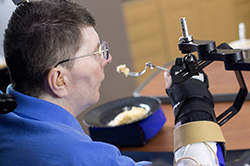 Bill Kochevar grabbed a mug of water, drew it to his lips and drank through the straw. His motions were slow and deliberate, but then Kochevar hadn’t moved his right arm or hand for eight years. And it took some practice to reach and grasp just by thinking about it.

Kochevar, who was paralyzed below his shoulders in a bicycling accident, is believed to be the first person with quadriplegia in the world to have arm and hand movements restored with the help of two temporarily implanted technologies. Learn more about the exciting research here. 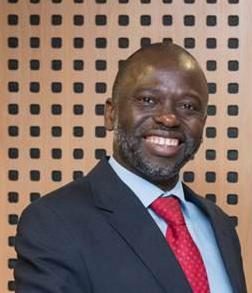 Tshilidzi Marwala (CWR ‘95) is the deputy vice chancellor of research and innovation at the University of Johannesburg and well-known throughout South Africa for leading delegations to the South African parliament. Dr. Marwala has been published in The Economist, New Scientist and Time magazines. In 2016, he returned to campus to accept The Alumni Association's Professional Achievement Award.

Upon graduating from CWRU, Dr. Marwala earned a Master of Mechanical Engineering from the University of Pretoria in South Africa and a PhD in Engineering from the University of Cambridge (UK). In addition to holding numerous positions and titles, he is well known throughout South Africa, having worked with all spheres of government and industry and led delegations to the South African parliament. Dr. Marwala has published papers on the link between science policy and development and the development of states and democratization, in addition to technical papers. He has been featured on television, radio, and newspapers and published in the Economist, New Scientist and Time Magazines.  Despite all he has achieved in his career, he continues to mentor students and has supervised 45 Masters and 19 PhD candidates. 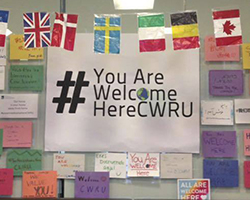 International students at Case Western Reserve University (CWRU) represent more than 75 countries and make up over 19% of the total student body. While global engagement has long been a university priority, recent federal developments have catalyzed campus-wide efforts to ensure that students from other countries know that they are valued and celebrated here.

In late January, President Trump issued an executive order that suspended entry to the U.S. for individuals from seven countries in the Middle East and all refugees. In the weeks that followed federal courts temporarily blocked the measures, the White House issued another order, and courts again intervened. On campus, university leaders called the original order antithetical to our values and the Faculty Senate passed a resolution condemning the order.

The #YouAreWelcomeHereCWRU campaign, launched in February, has gone viral across campus. The Center for International Affairs released a call for support and students, staff, faculty, and alumni submitted videos and photos to show support for our international students and to make it clear that all are welcome at Case Western Reserve University. #YouAreWelcomeHereCWRU signs continue to hand around campus, making sure the message is never forgotten.

Read more about the #YouAreWelcomeHereCWRU campaign in the daily.

Case Western Reserve University (CWRU), including the School of Medicine, Francis Payne Bolton School of Nursing, and Department of Biomedical Engineering, and Hospital Israelita Albert Einstein of São Paulo, Brazil, held a three-day symposium in March focusing on biomedical research, innovation, and health education, with an emphasis on global health issues of importance across the Americas.

The symposium featured presentations and panel discussions with faculty members and clinicians from the two institutions, with the goal of exploring areas of mutual strength and interest as well as identifying opportunities to enhance and expand current collaborations. Representatives from FAPESP, the São Paulo Research Foundation, the Fogarty International Center of the National Institutes of Health (NIH) were also in attendance.

You can read more about the Building a Global Partnership in Education, Research and Innovation Symposium here.

CWRU to Welcome The International Symposium on Academic Makerspaces to Campus

The International Symposium on Academic Makerspaces (ISAM) joins the people, knowledge & inspiration that fuse to catalyze higher education makerspaces which maximize their impact on the student learning experiences and alumni success.  ISAM fosters community, networking, interaction and learning between people who are passionate about making.  ISAM will be on campus September 24th-27, 2017. More information on this exciting event can be found here.

No matter where you live, Case Western Reserve University makes it easier than ever for alumni to help current students find a fulfilling career path. We've partnered with Wisr to bring you the Alumni Career Network, a new mentoring and networking technology that makes it easy for caring CWRU alumni to help guide students through questions about their career paths, industries, and graduate school choices. As a member, you will also have the benefit of browsing the network and connecting with fellow alumni.

Share your experience and offer your expertise to students in need of advice. A 15- or 30-minute conversation with a knowledgeable alum can change a student’s life forever. It’s simple — we provide the automated matching, scheduling and follow-up communications and you provide the valuable advice CWRU students want and need.