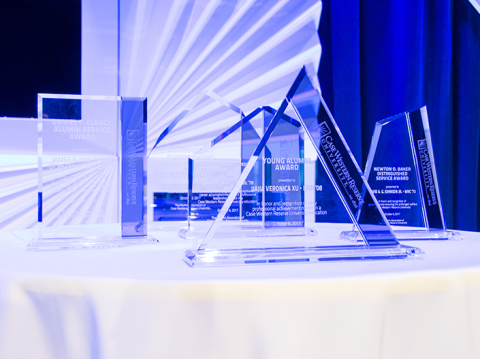 DISTINGUISHED ALUMNI AWARD: JEAN CAPERS (EDU '32)
Judge Jean Capers has had a lifetime of impact in the education and legal spheres. A true trailblazer, she was the first African-American woman elected to Cleveland’s City Council in 1949, served as special counsel to the Ohio Attorney General and was an original member of the Women’s Advisory Council of Employment Services. At age 62, Capers was appointed and then elected Cleveland Municipal Judge. Her service to the community, including her work with the Central Welfare Association, exemplifies her focus on social justice and her commitment to the Cleveland area. Judge Capers has been honored by the City Club of Cleveland, Ohio State Bar Association, YMCA and Delta Sigma Theta Sorority. With sadness, this award will be bestowed posthumously, as Judge Capers passed away in July.


NEWTON D. BAKER DISTINGUISHED SERVICE AWARD: DAVID A. G. JOHNSON JR. (WRC '73)
Johnson currently serves on the board of directors for The Alumni Association of Case Western Reserve University. Additionally, Johnson served CWRU’s New York Alumni Association as president, secretary and archivist, receiving the group’s Adrian Freeman Award in 1999. Johnson has served the community as a mentor for student teachers/graduate students at Queens College, City University of New York and St. John’s University, as president and trustee of the Schomburg Corporation, the chairman of the board for the Cinque Gallery and on advisory committees for Carnegie Hall's Weill Music Institute and the Romare Bearden Foundation.


DANIEL T. CLANCY ALUMNI SERVICE AWARD:
JAMES B. TRELEAVEN (CIT '69, GRS '90, management)
Treleaven has been involved at Case Western Reserve University since his leadership as a student. For 47 years, he has been involved with The Alumni Association of Case Western Reserve University (including serving as president), Case Alumni Association, Spartan Club and several visiting and planning committees across the university, as well as hosted alumni and prospective students and generously supported CWRU fundraising.


YOUNG ALUMNI AWARD: JIAJIA VERONICA XU (LAW '08)
Nominated by Profs. Jonathan Entin and Maxwell Mehlman, Xu works in international and corporate law, negotiating across cultural differences for clients that conduct business worldwide. Beyond her professional responsibilities, she is an instructor with the Law and Leadership Institute, sponsored by the Ohio Supreme Court. She is also committed to substantial involvement in the community, including organizing free legal seminars for minorities in Northeast Ohio, mentoring CWRU law students and alumni, teaching Chinese to children and adults, and serving as diversity committee vice-chair of the American Bar Association and board member of the Cleveland Student Housing Association.

The Distinguished Alumni Award recognizes an alumnus or alumna who has made distinguished and outstanding contributions to his or her profession or field of interest and, over the course of a lifetime, brought benefit to his or her community, humanity and honor to the university by embodying the values and spirit of Case Western Reserve University. This award is the highest honor bestowed by The Alumni Association.

The Young Alumni Award recognizes an outstanding alumnus or alumna of Case Western Reserve University who is 35 years old or younger. The award is given to an alumnus or alumna who has demonstrated excellence in his or her professional field and/or has demonstrated service to his or her community, the public or humanity, embodying the values, spirit and pride of Case Western Reserve.

The Daniel T. Clancy Alumni Service Award is named in honor of the contributions of Dan Clancy to the alumni of Case Western Reserve University. This award recognizes an outstanding alumnus or alumna who has been active in alumni affairs for at least 15 years and has made significant contributions to The Alumni Association of Case Western Reserve University and its programs.

Formerly given by the university's Undergraduate Alumni Association, the award honors the legacy of Cleveland's Newton D. Baker, who urged everyone to volunteer their time, talent and service to those in need. Baker was the 37th mayor of Cleveland, served as Secretary of War under President Woodrow Wilson and was a major supporter of Cleveland College. In 1916, he and two partners founded Baker Hostetler, one of the nation's top 100 law firms with more than 700 attorneys serving clients around the world.

The Newton D. Baker Distinguished Service Award honors the lifetime legacy and community endeavors of Newton D. Baker. This award recognizes significant service to the university by any alumnus or alumna, staff member, faculty or friend of the university who has given their time, expertise or leadership generously, thereby ensuring the prolonged welfare of the institution for generations to come.