President’s Message- Congratulations to All!

“Nothing can dim the light which shines from within.” - Maya Angelou

Winter is over at last! Flowers are blooming; birds are singing; the enormous tree in my backyard is laden with beautiful green leaves. Spring, with its signs of new life, is such a wonderful backdrop for celebrating excellence.

One of my favorite signs of spring is the arrival of graduation announcements from family and friends, inviting us to celebrate those from pre-school to grad school who have put forth their best efforts and are moving on to the next stage. On May 17, 2019, I was privileged to participate in such a celebration for ninety-plus students from the African Diaspora who successfully completed their degree programs. The ceremony acknowledged African and African American cultures and concluded with a Kente stole presentation. I was honored to present the students with their alumni pins. Congratulations to all who received degrees at the May 2019 commencement. As you begin a new chapter in your life, I wish you the very best.

Heartfelt congratulations to all who were honored this spring. We are proud of all you have accomplished.

Graduate Arik Stewart, with Vera Perkins-Hughes (WRC ‘76), will be working at FirstEnergy.

Also during the luncheon, the African American Alumni Association presented OIEDO Vice President Marilyn S. Mobley, Ph.D. (GRS ’87) with its inaugural President’s Visionary Award. Mobley became the first person to hold the position of OIDEO Vice President and the first campus-wide leader of diversity in January 2009. Among her many accomplishments are Diversity 360, the Trailblazer Project and strong support of AAAA. To modify Bessie Anderson’s words, Dr. Mobley has “filled her niche, accomplished her task, and left the campus better than she found it.” Mobley begins a sabbatical in June, but will return to teach in the English department.

On April 12, 2019, the Office of Multicultural Affairs, under the leadership of Naomi Sigg, held its 29th Annual Unity Banquet. More than $10,000 was given in scholarships. Kudos to all award and scholarship recipients!  As keynote speaker Jose Vargas affirmed, “You are a majority of one, the master of your own narrative.”

The reputation and standards of CWRU are often intimidating to new students.  That intimidation can be heightened by the way success is promoted or not promoted by staff, faculty, and other students. Attitudes about success are important factors in an environment where successful completion of a CWRU education is the norm for everyone. Gone are the days when instructors stated to a class of freshmen, “Look to the left; now look to the right. Understand that only two of the three of you will actually graduate.” Low graduation rates are no longer viewed as a sign of academic rigor, but rather as an institutional short-coming. Leaving college early without a degree is no longer considered an issue of poor academic preparation, but a complication of many factors, some predictable and some unexpected.

In 2017, CWRU ramped up its support of students through the Student Success Initiative. President Barbara R. Snyder committed the entirety of her $500,000 Carnegie Corporation academic leadership award to it, and the Board of Trustees committed another $500,000.  At CWRU, there is systemic institutional support for student success.

Now, navigators reach out to students who volunteer for the program and direct them toward satisfying social experiences and graduation. Sometimes, the navigator will connect a student with someone who can help resolve a problem, or will reach out to let a student know about a campus event that aligns with his/her post-graduation interest. The navigator may simply "check in" to see how the student is doing or work closely with faculty advisors, so the student is up to date on academic progress, experiential learning activities, and other developments important to overall well-being and success at CWRU. In other words, students are not being left to flounder on their own but given the support they need to problem-solve issues that would be a hindrance to graduation.

The message is clear. African American and other new students are accepted with the expectation that they will be successful. Once they are accepted to CWRU, we’re all on the same team to promote academic rigor and success on campus and into the future.

The CWRU NSBE chapter has always strived to live out the organization's mission: to increase the number of culturally responsible black engineers who excel academically, succeed professionally and positively impact the community. At Case Western Reserve, the chapter aims to provide the support, tutoring, mentorship, and leadership development necessary for black students to succeed as professionals in any field, and especially engineering.

Over the course of the past year, the CWRU chapter has held record-high career placement rates, volunteered at several Cleveland schools, won five regional awards, earned the ranking of 4th out of the 48 chapters in the Midwest region, and held a 100% five-year graduation rate.

NSBE partnered with the Case Alumni Association, the Office of Student Affairs and the Office of Multicultural Affairs to offer twenty full-coverage scholarships for students to attend the 2018 NSBE Fall Regional Conference. This endeavor allowed students in a wide variety of fields, ranging from economics to anthropology, to benefit from the organization’s numerous resources. The chapter has appreciated the support of the African American Alumni Association, as several members volunteered to coach students at CWRU NSBE’s 1st Annual Mock Career Fair this past fall.

The chapter strives to create a strong culture of encouragement and empowerment through interactions with members from past and present. In April, CWRU NSBE hosted Dr. Marshall Lindsey (CWR ’01), the 1998-1999 CWRU NSBE chapter president. He gave an impactful talk about merging engineering and personal investment.

This year, CWRU NSBE members have focused on bettering themselves as students and as community members, so receiving the Outstanding Student Organization of the Year award has been a great honor. The chapter will strive to uphold this distinction of excellence by continuing to promote cultural responsibility, professional development, volunteerism, financial literacy, academic achievement, and collaboration through its membership.

On March 26, 2019, members of the African American Alumni Association (AAAA) joined the African American Society for their Mute R. Kelly event, a Q&A session with prepared questions. In the wake of the allegations against the R&B star, students and alumni discussed the impact of the allegations on both him and the alleged victims, the impact on society as a whole, and the many ways in which society addresses sexual assault – from questioning the validity of the victims to supporting or ostracizing accused offenders, depending on their societal status.

This event provided an opportunity for students to express feelings and concerns and gain insight from classmates and alumni leaders. The engaging discussion, in a supportive environment, encouraged both students and alumni to consider new perspectives. AAAA will continue to be a support system for students in the future.

Hello everyone! This past January, I was able to participate in another medical and dental trip, providing basic education material for nutrition, health, dental, and physical mechanics in India. The team was fortunate to expand to other ashrams. Friendships were rekindled and new ones made. I encourage you to get out there. Explore in the United States or abroad. You will be amazed at how you can enrich someone's life and they yours.

There is always a door that leads to adventure.

Interested in exploring the world? Alumni travel through the CWRU Educational Travel Program has something for everyone! Learn more about upcoming trips here or check out the Siegal Lifelong Learning website.

The CWRU community is invited to attend the upcoming Juneteenth Celebration on June 19, 2019, from 2-4 p.m. in the Tinkham Veale University Center. The event is free and open to the public.

Juneteenth celebrates the final freeing of slaves in Texas. It was on June 19, 1865, that slaves in Galveston, Texas, learned that they were free, although they had been freed two years earlier when President Lincoln signed the Emancipation Proclamation in 1863.

The event will include traditional food, music, a poetry reading, and a keynote address by Vice President for Inclusion, Diversity, and Equal Opportunity Marilyn S. Mobley, Ph.D. It is sponsored by the CWRU African American Campus Community Resource Group, the Office for Inclusion, Diversity and Equal Opportunity, and the Office of Multicultural Affairs.  To attend, please RSVP here. 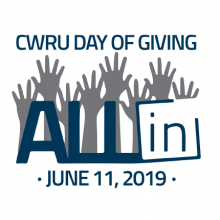 Don't forget to participate in the annual Day of Giving on June 11!

You can support the Reach Back Raise Up Scholarships on that day, and every day!

Want to see who else is involved with the AAAA?

What would you like to see highlighted in future newsletters? Have news to share?  Know someone who wants to receive AAAA communications? Contact us at alumnirelations@case.edu.