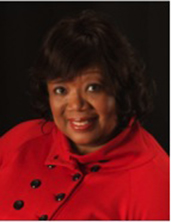 The African American Alumni Association salutes the class of 2017 and the impact you will have on the future. Your hard work has paid off. Take time this vacation season to relax. Travel, visit friends and family, experience beautiful landscapes and awesome adventures. Have a fun summer. Come back and let us know what you did and where you went. We look forward to seeing you, our newest alumni, at Homecoming this fall.

In the fourth grade, my teacher picked my books off my desk, threw them in the trash, and told me to pick them out of the garbage if I wanted them. She then let me know that I was basically nothing more than a product of my environment. People where I come from know this story all too well.

My entire life I’ve been blessed with opportunities that society thinks people where I come from cannot make the most of. I will devote my life to making sure our urban youth know we too can live out our dreams and surpass sub-par systems designed to keep us marginalized and subconsciously defeated. 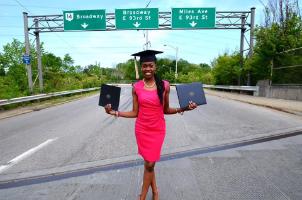 It’s not about these two degrees. Nothing is in these folders but pieces of paper. It is about these neighborhoods. They inspired me to earn these degrees, so I can help others acquire the means to help others. It is about the perseverance I learned through my struggles and accomplishments and through those of my friends.

Growing up in an underprivileged area does not have to be synonymous with having a rough life.  My experiences in these neighborhoods provided the support and drive I needed to find God for myself, make my support system proud, excel in school, give more than 200 hours of  community service, study abroad, secure a full-time job prior to graduation and graduate debt-free. I am indeed a product of my environment. I’ve seen good, bad and ugly. Thank you parents, family and friends for lifting me up to be a reflection for future generations to see.  We cannot all be LeBron James, but we can all be champions for progress.
Photos: Cheryl Martin 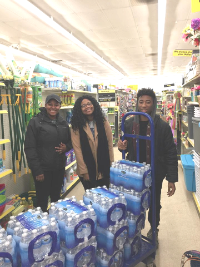 The Center for Civic Engagement & Learning (CCEL) hosts community service programs that enable students to get involved in service beyond Cleveland. Students on Alternative Breaks engage in projects with nonprofit organizations and community members in other cities and countries. During the Spring 2017 semester, CCEL offered both domestic and international March & May programs, including those focused on mass incarceration and refugees & immigrants.

One domestic program returned for the third time to Flint, Michigan, in March. The generosity of alumni, faculty, staff, students and community partners enabled the team to distribute three huge boxes of grocery items, many wipes and cleaning supplies, and more than 180 cases and 100 gallon-jugs of water.  In addition, they cleaned, organized, prepared food and served at The Ivy House, Catholic Charities North End Soup Kitchen and My Brother's Keeper Men's Shelter. 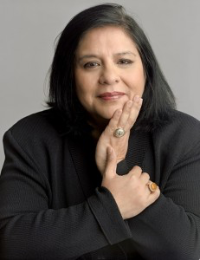 Keynote speaker Consuelo Castillo Kickbusch broke barriers during the two decades she served in the United States Army and became the highest ranking Hispanic woman in the Combat Support Field. In 1996, she left a successful career and returned to her roots to become a community leader.  Since then, Kickbusch has mentored more than one million families across the United States.  “I raised arms to defend my country,” she told the audience, “but I beg you, don’t fight wars.  Instead, import peace.One hate doesn’t deserve another. It deserves a dialogue.” 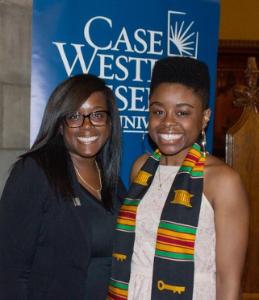 On Friday, May 19, 2017, Case Western Reserve University held the second annual Black Graduation ceremony. This pre-commencement celebration, hosted by the Offices of Multicultural Affairs and Inclusion, Diversity and Equal Opportunity, honored graduate and undergraduate students from the African Diaspora who successfully completed their degree programs. Lacie Parham delivered the senior reflection. Dr. Rhonda Y. Williams, professor of history, director of the Social Justice Institute, and founder and director of the postdoctoral fellowship in African American studies at CWRU, gave keynote remarks. Graduates selected family members or close friends to drape Kente stoles over them when their names were called, honoring African and African American culture and our sense of community. They were also given African American Alumni Association pins, marking their transition from students to alumni. The evening concluded with a reception, where students connected with family and CWRU colleagues before commencement the following Sunday. It was my pleasure to be part of such a special ceremony. Welcome, graduates, to the African American Alumni Association.  We wish you much success!
Tiarra Thomas (CWR ’12)

This summer, 25 young leaders from sub-Saharan Africa will spend six weeks on campus in a federal program aimed at empowering them through workshops, leadership training and networking. CWRU is one of 38 colleges and universities chosen nationally by the U.S. State Department and International Research and Exchanges to host the 2017 Mandela Washington Fellowship for Young African Leaders.

Join Case Western Reserve University Alumni, staff, and faculty on Tuesday, July 25, 2017 as we welcome the Mandela Washington Fellows. This exciting event will take place at Bop Stop at The Music Settlement. To register visit https:cwru2017yalinetworkingevent.eventbrite.com

The AAAA welcomes the class of 2017, who became alumni on Sunday, May 21. Thanks to Gwendolyn G. Johnson and Earnestine Adeyemon, we have information on 51 other distinguished African American alumni, some who graduated more than 100 years ago.  Six are highlighted below. This information from the African American Scholars Initiative can be accessed through university archives Digital Case.

Rev. John Sykes Fayette, pictured with his wife, is cited as being the first documented African American student to attend Western Reserve College, which was then located in Hudson, Ohio. At that time, tuition was $20 per year. Rev. Sykes, who excelled in mathematics, was a strong abolitionist. He graduated in 1836.

John M. Anderson graduated from Western Reserve University Law School in 1897. In 1908, he became a charter member of the Cleveland Association of Colored Men. One of the first activities of the association was to eliminate discrimination in housing accommodations for African Americans attending the National Education Association held in Cleveland in 1908.

Lewis R. Gilbert received his BS in electrical engineering from the Case School of Applied Science in 1900. He first became a draftsman with the Browning Engineering Company, later worked for the Packard Motor Company in Detroit, and, in 1905, was employed by the Peerless Auto Company in Cleveland as an assistant mechanical engineer and designer. Poor working conditions in the U.S. caused him to go to France to work until the outbreak of World War I.

Dr. John R. Philen worked for a dairy farm on Chester Avenue to finance his education and graduated from Western Reserve University Medical School in 1902. He established a practice on East 35th and Central Avenue.

Clemence Greene, class of 1915, was the first African American to graduate from Western Reserve University School of Pharmacology. She established Greene's Drug Store on East 40th and Central Avenue in the 1920's.

Edith Louise Wright Rice majored in English/literature and graduated from Western Reserve College for Women in 1916.  After graduation, she was employed as a teacher in Piney Wood, Mississippi. She later became assistant executive secretary at the Phyllis Wheatley Association in Cleveland and executive secretary of the YWCA in Brooklyn, New York.

Homecoming Reception- Save the Date!

‌Want to see who else is involved with the AAAA? June 2017 AAAA Member Roster

Current member? Seeking to become a member? It is easy to update your membership.

What would you like to see highlighted in future newsletters?  Have news to share?  Know someone who wants to receive AAAA communications?  Contact us at cwruaaalumni@gmail.com.