ARMENIANS. Armenian immigration to Cleveland began in 1906 or 1907 when employees of the AMERICAN STEEL & WIRE CO. factory in Worcester, MA, came to Cleveland to work in a newly opened branch of that firm. The company soon had five branches in the area, and Armenians who had earlier worked in its factory in Massachusetts were willing to come to the Midwest, lured by salaries that were often one-third higher. Most of the workers were young men without wives or family, and at first, they numbered about 50. These immigrants arrived from the Ottoman Empire, especially the Turkish city of Malatya, while few, if any, arrived from Russian Transcaucasia at this time.  These Armenians congregated after work in a coffeehouse at E. 71st and Broadway, near the rooming houses where many lived. In 1910, the community established an Armenian Athletic Club and, by 1913, there were more than 100 Armenians in Cleveland. Some began to leave the mills to find employment as merchants, or in small crafts as barbers, shoemakers, or tailors, a trend that greatly increased in the 1920s. Many were involved in the Oriental rug business in the city. Malcolm H. Berejik, reportedly the first Armenian to settle in Cleveland, was also the city's first Oriental rug dealer.  Today, the involvement of the Cleveland Armenian community with the Oriental rug business continues with the Arslanian brothers' rug and carpet cleaning and repair service, established by the brothers Ted, Hank and Armen Arslanian in Cleveland in 1959. 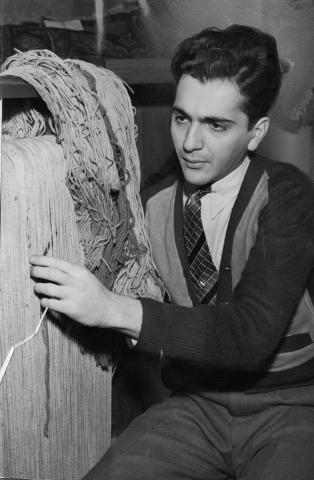 Courtesy of the Cleveland Public Library Photograph Collection.
The Armenians have long played a major role in Cleveland's Oriental Rug business. This photograph from December 30, 1940 shows Vahe Gulbenkian repairing such a rug on a loom at 12551 Euclid Ave.

By 1910, two major Armenian political parties established headquarters in Cleveland. The Armenian Revolutionary Federation (ARF, or the Dashnaks) eventually located at E. 55th and Broadway, while the Armenian Democratic Liberal Party (the Ramgavars) went to E. 21st and Prospect. Migration slowed from WORLD WAR I until the early 1920s, when the second wave of immigration occurred.  This new wave was largely comprised of refugees from the Armenian Genocide of 1915.  After the implementation of the immigration restrictions of 1921 and 1924, many arrived in America circuitously via Cuba, Mexico, or Canada and a good number entered the U.S. illegally. (see: IMMIGRATION AND MIGRATION)  Most found unskilled work at the mills, or often as workers in hotels. One of the most prominent Armenian immigrants to arrive in Cleveland during this period was Soghomon Tehlirian, best known as the assassin of Talaat Pasha, the main architect of the 1915 Genocide.  Tehlirian ran his own business in Cleveland before leaving for Marseilles, and then Yugoslavia.

Meanwhile, in 1920, the SOVIET UNION’s absorption of the tenuously independent Armenian Republic in the Caucasus heightened the political divisions among Armenian Americans, including those in Cleveland.  The short-lived republic had been governed by the Dashnaks, who became the most vocal critics of the Bolsheviks and Soviet Armenia in the Armenian Diaspora. By contrast, the Ramgavars were more willing to accommodate themselves to the realities of the new Soviet government.  These divisions were amplified by the onset of the Cold War between the U.S. and the USSR. Predictably, the visit of Soviet Armenian statesman Anastas Mikoyan to Cleveland in 1959 and his meetings with CYRUS EATON were met with a split response from Cleveland’s Armenian community.  The Ramgavars viewed Mikoyan sympathetically as an Armenian success story on the international stage.  By contrast, the Dashnaks condemned Mikoyan as a Bolshevik traitor, although even here, there were exceptions.  Some Cleveland Dashnaks, despite their opposition to communism, held positive sentiments on Mikoyan as a successful Armenian political leader.

It was not until WORLD WAR II, when the Armenian population of Cleveland approached 1,500, that the community achieved economic security. Institutions, such as the Educational Society of Malatya and the national Armenian General Benevolent Union (AGBU), became important, especially for helping young male workers find jobs and housing and learn English. They also assisted in the search for wives; many young Armenian women were brought directly to Cleveland from Cuba, to which they had come from the Middle East.  The Armenian church, the focus and protector of Armenian cultural life, continued its role in Cleveland for both the Ramgavar and Dashnak communities by supporting traditional Armenian culture. In 1950, the Ramgavars, who were affiliated with the Armenian Apostolic Church at Echmiadzin in Soviet Armenia, began a campaign to construct a church. In 1958, the community purchased land to build what eventually became the St. Gregory of Narek Armenian Apostolic Church in RICHMOND HEIGHTS.  In June 1960, the Catholicos-Patriarch of All Armenians Vazgen I arrived in Cleveland and blessed the land.  Construction of the church commenced in August 1962 and, on April 12, 1964, it was consecrated by Archbishop Sion Manoogian. A granite monument honoring the victims of the 1915 genocide was dedicated on church grounds on April 24, 1966.  In 1970, a Sunday school was established by the church, providing children with Armenian language and history education and, in April 1972, the community added a Cultural Hall adjoining the church. In February 1970, the Dashnaks established another center, the Armenian Holy Cross Church and Community Center, on Wallings Rd. in NORTH ROYALTON.  This church was affiliated with the Armenian Catholicosate of Cilicia based in Antelias, Lebanon.  Beginning in the late 1950s, both communities were served by an Armenian radio program played first on the station WXEN, and then on WJCU, affiliated with JOHN CARROLL UNIVERSITY.  From the 1950s to the 1970s, a few additional families settled in Cleveland, arriving from the Middle East and Eastern Europe. By 1980, the community numbered around 2,000 and remained stable until 1991.

The dissolution of the USSR impacted the Cleveland Armenian community in new dramatic ways.  Since 1991, Cuyahoga County and Cleveland have received a significant number of new Armenian immigrants from Armenia, Russia, Azerbaijan, and other former Soviet republics. (see: SOVIET AND POST-SOVIET IMMIGRATION) These Armenian immigrants arrived alongside other nationalities from the post-Soviet space, including their Caucasus neighbors, the GEORGIANS, as well as the RUSSIANS, JEWS, and UZBEKS. Most of the new arrivals were members of the professional classes and their arrival replenished the existing community.  Some, such as Sergei Babayan at the CLEVELAND INSTITUTE OF MUSIC, have been prominent in the arts.  Most settled in Cleveland's East Side suburbs, close to the St. Gregory Church and the nearby Russian and post-Soviet community, with which the Armenian community has developed strong ties. The growth of the Armenian population has been accompanied by the emergence of new businesses, such as the Jubilee Armenian Restaurant in Richmond Heights.  In 2018, the London-based Gomidas Institute, an independent academic organization devoted to the study of Armenia and the region and to Turkish-Armenian reconciliation, established its American headquarters in Cleveland, given its proximity to the East Coast and other large cities in the Great Lakes region.

The independence of Armenia from the USSR also effectively rendered the political animosity between the Ramgavars and the Dashnaks obsolete. The gradual unification of the two communities was assisted by the influx of the new immigrants and major unifying events. These events included the 2007 visit of Armenian Catholicos Karekin II and the 2010 dedication of the Armenian Cultural Garden. The latter was designed by Cuyahoga County architect Berj A. Shakarian and built by Carlos A. Bozoklian, among the CULTURAL GARDENS in Cleveland’s ROCKEFELLER PARK. In 2015, the Holy Cross community sold its church building and gradually migrated to the St. Gregory Church.  St. Gregory's now serves as the focal point of the Cleveland Armenian community, under the leadership of Fr. Hratch Sargsyan. Like the Russian community, the Armenian community of Greater Cleveland is today larger than at any time in its history, numbering approximately 3,000, primarily due to the arrival of the new immigrants from the post-Soviet space.  As of 2019, Cuyahoga County maintains the greatest concentration of Armenians within the state of Ohio, comprising the largest Armenian community between the East Coast and Metro Detroit.