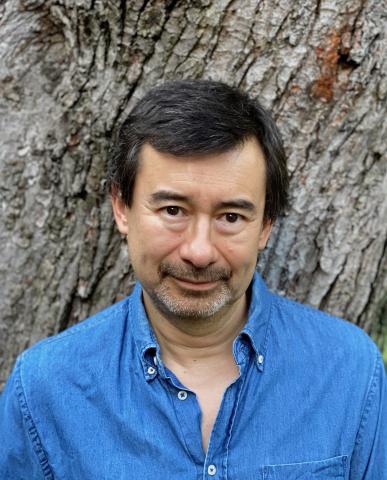 Peter Ho Davies is the author of five works of fiction, including the novels A Lie Someone Told You About Yourself, a New York Times Notable Book of the Year, The Fortunes, winner of the Anisfield-Wolf Award and the Chautauqua Prize, and a finalist for the Dayton Literary Peace Prize, and The Welsh Girl, long-listed for the Man Booker Prize, and a London Times Best Seller.

He has also published two short story collections, The Ugliest House in the World (winner of the John Llewelyn Rhys Prize, and the Oregon Book Award) and Equal Love (finalist for the LA Times Book Prize, and a New York Times Notable Book). His first book of non-fiction, The Art of Revision: The Last Word was published by Graywolf in 2021. Davies’ stories and essays have appeared in Harpers, The Atlantic, The Paris Review, The Guardian, The New York Times, Washington Post and TLS among others, and has been widely anthologized, including selections for Prize Stories: The O. Henry Awards 1998 and Best American Short Stories 1995, 1996 & 2000.

In 2003 Granta magazine named him among its Best of Young British Novelists. Davies is also a recipient of fellowships from the Guggenheim Foundation, and the National Endowment for the Arts and is a winner of the PEN/Malamud and PEN/Macmillan Awards. Born in Britain to Welsh and Chinese parents, he has taught at the University of Oregon, Emory University, Northwestern University, and for the last twenty years in the Helen Zell MFA Program in Creative Writing at the University of Michigan in Ann Arbor where he is the Charles Baxter Distinguished Collegiate Professor.

The common reading selection is part of the First-Year Experience Program, which is committed to helping new students successfully transition from high school to Case Western Reserve. The common reading book is chosen for its potential connections to a range of academic departments, centers, and other campus initiatives.

Incoming students will receive a copy of The Fortunes and will participate in related programming during their inaugural semester at the university.

Tracy K. Smith is an American poet and educator. Smith’s memoir, Ordinary Light, and four books of poetry: Wade in the Water (April 2018); Life on Mars, which received the 2012 Pulitzer Prize; Duende, recipient of the 2006 James Laughlin Award; and The Body's Question, which won the 2002 Cave Canem Poetry Prize. In 2017 she was named the 22nd U.S. Poet Laureate Consultant in Poetry by the Library of Congress, and, in March 2018, she was re-appointed to a second term for 2018-19. During her tenure as Poet Laureate of the United States, Smith traveled across America, hosting poetry readings and conversations in rural communities.

Elaine Weiss is a journalist and author whose work has appeared in The Atlantic, Harper’s, The New York Times, and The Christian Science Monitor, as well as in reports and documentaries for National Public Radio and Voice of America. Her highly acclaimed narrative non-fiction book, The Woman's Hour: The Great Fight to Win the Vote (Viking 2018), was chosen as Case Western Reserve University’s 2020 common reading book.

Paige Williams is a staff writer at The New Yorker and author of The Dinosaur Artist, a work of narrative journalism. She won the National Magazine Award for feature writing in 2008 and was a finalist in another category in 2011. Her work has appeared in a number of anthologies, including multiple volumes of The Best American Magazine Writing and The Best American Crime Writing.

The Dinosaur Artist, published in September of 2018, was a Times Notable Book of 2018, was listed in Best Books of 2018 by Publishers Weekly, Library Journal, Smithsonian, and NPR’s “Science Friday,” and was a finalist for the 2019 Mississippi Institute of Arts and Letters prize in nonfiction.

Sarah Kay uses the power of spoken word to inspire creativity and self-empowerment in others. Sarah is the founder and co-director of Project V.O.I.C.E., an education organization that celebrates and inspires self-expression in youth through spoken-word poetry. Through her involvement with the organization, Sarah has taught spoken-word poetry to students of all ages, in classrooms and workshops all over the world. She is the author of the book B, which was ranked the number one poetry title on Amazon.com, The Type, and All Our Wild Wonder.

Sarah Vowell is the New York Times’ bestselling author of six nonfiction books on American history and culture. By examining the connections between the American past and present, she offers personal, often humorous accounts of everything from presidents and their assassins to colonial religious fanatics, as well as thoughts on American Indians, utopian dreamers, pop music and the odd cranky cartographer. Her book Lafayette in the Somewhat United States (Riverhead, October 2015) was selected as the university's 2017 common read.

Anthony Doerr's novel, All the Light We Cannot See, treats readers to the story of a blind French girl and German boy whose paths collide in occupied France as both try to survive the devastation of World War II. The awarding Pulitzer committee described the work as “an imaginative and intricate novel inspired by the horrors of World War II and written in short, elegant chapters that explore human nature and the contradictory power of technology.”

In addition to being awarded the 2015 Pulitzer Prize for fiction and the 2015 Andrew Carnegie Medal for Excellence in Fiction, Doerr has won numerous prizes, both in the United States and abroad, including four O. Henry Prizes, three Pushcart Prizes, the Rome Prize, the New York Public Library’s Young Lions Award, the National Magazine Award for fiction, a Guggenheim Fellowship and the Story Prize.

Dr. Claude Mason Steele's groundbreaking research addresses some of the most pressing contemporary problems in American society. His book, Whistling Vivaldi: And Other Clues to How Stereotypes Affect Us and What We Can Do, provokes readers to examine how they identify each other and themselves. Steele shares new research and insights about the power of stereotypes, often illustrating them with compelling stories involving young adults and college students. The book addresses not only race and racism, but also stereotypes of gender, sexuality and ethnicity.

For twenty years, cardiologist Barbara Natterson-Horowitz has treated human patients at the UCLA Medical Center, developed imaging techniques and lectured to thousands of medical students, residents, fellows, colleagues and community members. Currently she is cardiac consultant for the Los Angeles Zoo and a member of the Zoo's Medical Advisory Board as well as the Director of Imaging for the UCLA Cardiac Arrhythmia Center. Her outstanding rapport with students has won her numerous teaching awards and made her a popular professor at the David Geffen School of Medicine at UCLA where she lectures about cardiovascular physiology, cardiovascular pharmacology, echocardiography and bioengineering. Her writing has appeared in many scientific and medical publications. Her bestselling book, Zoobiquity: The Astonishing Connection Between Human and Animal Health was chosen as Case Western Reserve University's 2014 common reading selection.

Susan Cain's book, Quiet: The Power of Introverts in a World That Can't Stop Talking has sparked a genuine national conversation about introverts, who comprise a third to a half of every workplace and classroom, and whose natural talents we can no longer afford to waste. Quiet is an instant New York Times bestseller, has been translated into 30 languages, and is one of the most talked about books of 2012.

William Kamkwamba co-wrote the New York Times best-seller The Boy Who Harnessed the Wind: Creating Currents of Electricity and Hope. The story chronicles how the now 25-year-old Kamkwamba brought electricity and the promise of a better life to his family and village in Malawi. Kamkwamba is currently a student at Dartmouth College. His story has been featured in The Wall Street Journal as well as on Good Morning America, The Daily Show, CSPAN Book-TV and NPR. A 2007 TED Global Fellow, he has spoken at multiple TED conferences, addressed audiences at the 2008 World Economic Forum, and spoken at schools and universities around the world.

Harvard professor Michael Sandel explores the moral ideas behind the world’s most controversial issues in his popular lectures and books, including his latest book, the New York Times best seller Justice: What's the Right Thing to Do? His undergraduate course in political philosophy, Justice, regularly attracts more than 1,000 students and is the first Harvard course to be made freely available online and on public television.

Acclaimed author and environmental journalist Elizabeth Royte is the author of Bottlemania and Garbage Land. A former Alicia Patterson Foundation fellow and recipient of Bard College's John Dewey Award for Distinguished Public Service, Royte's writing on science and the environment has appeared in Harper's, The New Yorker, National Geographic, Outside, New York Times Magazine and other national publications.

‌Mortenson is the co-founder of Central Asia Institute, a nonprofit that builds rural schools in Pakistan and Afghanistan, and Pennies For Peace, which connects 2,700 American schools with struggling students abroad. He co-authored Time Magazine’s Asia Book of the Year, Three Cups of Tea, which remained on the New York Times Bestseller list for more than 100 weeks, with six months at the No. 1 spot.‌

‌Quammen is a science journalist, nonfiction author and (former) novelist who has spent most of his life in Montana. He travels on assignment for various magazines, usually to jungles, deserts or swamps. His accustomed beat is the world of field biology ecology, evolutionary biology, and conservation, though he also occasionally writes about travel, history and outdoor sports.

‌Ruhlman was born in 1963. He grew up in Ohio and graduated from the University School in Cleveland in 1981. He is a chef himself and has written a number of books dealing with food and cooking. A writer of nonfiction books, he also focuses on the search for perfection in a number of different fields and crafts.

Kidder was born in New York City in 1945 and attended Harvard College, where he earned an AB in 1967. He served as first lieutenant in Vietnam and was awarded a bronze star. After his tour of duty, Kidder obtained an MFA from the University of Iowa, where he participated in the Writers' Workshop, a program known for the literary luster of both its staff and alumni. His writing has been prolific and outstanding, earning a Pulitzer and a National Book Award in 1982 and the Robert F. Kennedy Book Award in 1989.

Thomas defined the way modern reporters cover presidents, from the glowing months of John F. Kennedy's Camelot, through the dark years of Watergate, all the way up to the dawn of the new millennium and the Internet age. A Hearst newspaper columnist who served for 57 years as a correspondent for United Press International and White House bureau chief, Thomas reached the White House by sheer will: she marched into the press room on Kennedy’s Inauguration Day and never left. And it was during this first White House assignment that Helen began closing presidential press conferences with "Thank you, Mr. President."

Sacks, dubbed the “poet laureate of medicine” is an explorer of the human mind. A physician and scientist, he has made a career of probing into the most puzzling, troubling—and extraordinary—corners of neurology. His work describing and treating patients suffering from conditions ranging from color blindness to Tourette’s syndrome has generated valuable insight into the human brain and its limitless capacity for adaptation. Dr. Sacks has written nine books on his life and work, including the international bestsellers Awakenings and The Man who Mistook his Wife for a Hat.