About Milton and Tamar Maltz 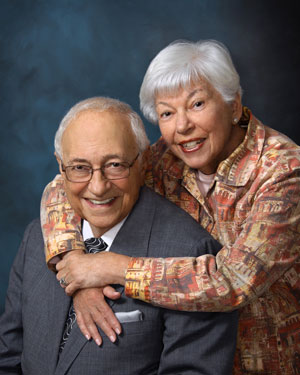 Milton and Tamar Maltz and the Maltz Family Foundation of the Jewish Federation of Cleveland made this project possible with lead commitments totaling $30 million. The Maltzes and more than 1,000 other distinguished guests celebrated the opening of the first phase of the project Sunday, Sept. 27, with a Cleveland Orchestra concert featuring the Violins of Hope, instruments rescued from the Holocaust.

‌The generosity of Milton and Tamar Maltz has made an indelible impact on Northeast Ohio, the nation and, ultimately, the world. Their commitment to arts, culture, education and awareness has played an essential role in the development of the overall Violins of Hope Cleveland initiative; indeed, several of the project’s primary partners have been beneficiaries of the Maltz family’s philanthropy.

Among their most noteworthy contributions to greater Cleveland, for example, is the creation of the Maltz Museum of Jewish Heritage. This Beachwood, Ohio, institution seeks to extend tolerance and understanding by sharing Jewish heritage through the lens of the American experience. The museum hosted a major exhibit of the Violins of Hope and their place in history from Oct. 2, 2015 through Jan. 3, 2016.

More recently, the Maltz Family Foundation of the Jewish Federation of Cleveland made a $20 million lead gift to the Cleveland Orchestra for its Center for Future Audiences. In years past Case Western Reserve announced that the Maltz family and the foundation expanded their lead gift commitment of $12 million to $30 million for the Milton and Tamar Maltz Performing Arts Center at The Temple – Tifereth Israel.

Franz Welser-Möst led the Cleveland Orchestra in the opening performance of the Violins of Hope Cleveland project. Members of the orchestra played the historic violins in the newly renovated Silver Hall, part of the Maltz Performing Arts Center at The Temple – Tifereth Israel. The concert was broadcasted live on WVIZ/PBS (channel 25). It also was streamed at WVIZ.ideastream.org and aired with audio only on WCLV 104.9 Classical.

The Maltz Family Foundation also committed $10 million to the Cleveland Museum of Art’s Gallery One, an innovative, interactive experience that includes a 40-foot interactive display wall—believed to be the largest of its kind in any U.S. art museum.

Milton Maltz, who began his broadcast career as a child actor on radio and television, went on to write, produce and direct, “The Fight for Freedom,” a series of radio programs that chronicled the struggle to create the nation of Israel. He founded Malrite Communications in 1956 and served as its Chairman and Chief Executive Officer until selling the company in 1998.

Milton and Tamar moved to Northeast Ohio in the early 1970s and quickly became patrons of the orchestra and other venues for arts and culture. Milton went on to play pivotal roles in bringing the Rock and Roll Hall of Fame to Cleveland and launching the International Spy Museum in Washington, D.C. in 2002. Milton and Tamar also have supported the Brain and & Behavior Research Foundation for more than two decades, and more recently played a founding role in the Lieber Institute for Brain Development/Maltz Research Laboratories.