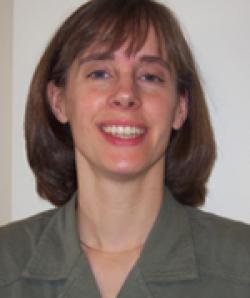 Anna Mitchell received her undergraduate degree in Biochemistry from Swarthmore College and graduated from the MD-PhD program at the University of Michigan. Her graduate work was done in the laboratory of Dr. Francis Collins studying the function of the Neurofibromatosis type 1 protein, neurofibromin. She completed a residency in Pediatrics at the Children's Hospital and Regional Medical Center in Seattle, WA and a Medical Genetics Fellowship at the University of Washington. During her fellowship she worked in the laboratory of Dr. Peter Byers, studying the role of type V collagen in classical Ehlers-Danlos syndrome.

Professor Mitchell studies the genes that encode the chains of the type V collagen protein (COL5A1 and COL5A2) and the connective tissue disorder that results from mutations within them, classical Ehlers Danlos syndrome.

Her work focuses on three areas:

The first of these is a G to A transition that results in substitution of a serine residue for a glycine at position 530 of the protein.

The second is the alternative splicing of exon 64, which appears to have a tissue-specific pattern in mice, with some tissues utilizing exclusively exon 64A and others using the two isoforms in equal amounts.