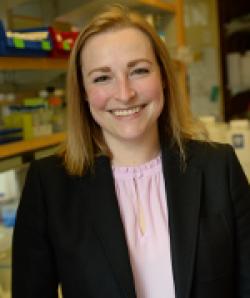 Ashleigh Schaffer graduated with a BS in Genetics from University of Wisconsin-Madison and went on to earn her PhD from the University of California, Irvine under the mentorship of Dr. Maike Sander, where she studied transcription factor-mediated mechanisms of cell fate determination in the pancreas. She then continued her training as a postdoctoral fellow at the University of California, San Diego, and Howard Hughes Medical Institute under the guidance of Dr. Joseph G. Gleeson, focused on elucidating the genetic cause, and molecular mechanisms, underlying recessive pediatric neurological disease. During her time with Dr. Gleeson, Ashleigh discovered over 20 novel genetic causes of disease, many of which occurred in proteins that bind to RNA. She was then awarded an NIH K99/R00 Pathway to Independence grant to delve further into RNA-mediated pediatric neurological disease mechanisms in the lab of Gene Yeo at University of California, San Diego. She joined the Department of Genetics and Genomes Sciences at Case Western Reserve University as an Assistant Professor in February 2017. She has a secondary appointment in the Center for RNA Science and Therapeutics.

I focus on the genetics of neurodevelopmental disorders and pediatric-onset neurodegeneration, including tissue-specific requirements of ubiquitously expressed proteins in development and disease.

It has long been assumed that ubiquitously expressed proteins, like those that regulate RNA transcription and translation, function in a conserved manner across tissues and between species. Thus, severe, damaging mutations would lead to systemic phenotypes and cause lethality in humans. Contrary to this idea, we have identified patients with tissue specific disorders harboring variants in a variety of ubiquitously expressed proteins. This finding indicates ubiquitous proteins may function, or regulate, cellular processes in a cell type specific manner.

Our laboratory is primarily interested in understanding the unique functions of ubiquitously expressed proteins in human brain development and pediatric neurological disease. We focus on a set of ubiquitously expressed proteins that regulate RNA biogenesis, stability, and protein translation called RNA binding proteins. We use a variety of animal and stem cell models to investigate protein function on a gross and molecular scale.

Additionally, we aim to uncover new mechanisms of neurological disease through genetic and functional studies conducted in collaboration with our local hospitals.