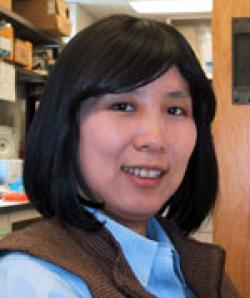 I am interested in alternative RNA processing and its role in health and disease, including correction of splicing mutations in diseases.

The research focus of my laboratory is to understand alternative pre-mRNA splicing in mammals: its biological role and the molecular mechanisms that regulate alternative splicing. We are specifically interested in regulation of alternative splicing in neurons and heart tissues under both normal and pathological conditions. We combine genetic and biochemical approaches and use several model systems in our studies.

Role of alternative splicing in vivo

Alternative splicing plays an important role in the function of the gene product of the tumor suppressor gene neurofibromatosis type 1 (NF1). Exon 23a of the NF1 pre-mRNA is an in-frame exon encoding 21 amino acids in the NF1 GTPase-activating protein (GAP) domain. This exon is alternatively included, producing two NF1 isoforms. The type I isoform does not contain this exon, while the type II isoform does. The ratio of the two isoforms varies in different tissues and during development. The type I isoform is predominantly expressed in neurons of the adult central nervous system and shows ten times higher activity in down-regulating Ras activity than the type II isoform.

To determine how changes of NF1 alternative splicing affects the role of NF1 in development, we generated a mouse model in which the ratio of the two NF1 isoforms is drastically altered. By studying the phenotype of the knock-in mice, we will gain insight into regulated exon 23a expression in the development and function of the nervous system.

Our previous studies demonstrate that alternative inclusion of exon 23a is controlled by at least four groups of RNA-binding proteins, TIA-1/TIAR, Hu (also known as ELAVL), CELF and MBNL proteins. In addition, we discovered that the selective inclusion of NF1 exon 23a could be regulated at the chromatin level. Recently, a number of genome-wide analyses indicate that for most eukaryotic genes, transcription and splicing are tightly coupled. This tight coupling of transcription and splicing predicts that alternative splicing choice can be regulated by histone modifications, chromatin structure, as well as transcription elongation rate. Our recent studies establish that epigenetic changes induced by environmental cues, such as increased calcium levels, affect alternative splicing of NF1 exon 23a through altering transcriptional elongation rate. Currently, we are investigating if and how splicing pattern of exon 23a changes dynamically in normal brain functions such as learning and memory.

Hua Lou received a Ph.D. in Plant Molecular Biology at the University of Illinois at Urbana-Champaign in 1993. After a postdoctoral fellowship at the University of Texas M.D. Anderson Cancer Center working with Dr. Robert Gagel, Dr. Lou moved to Baylor College of Medicine to work with Dr. Susan Berget as an Instructor, where she continued her work on alternative splicing. Dr. Lou joined the Department of Genetics in 2000.