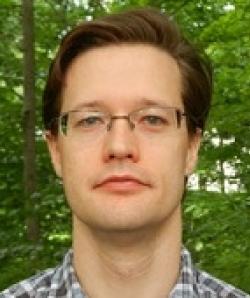 We are interested in utilizing X-ray and electron microscopic technologies to study macromolecular complexes that underlie the activation of G protein-coupled receptors and G proteins. We also utilize Mass spectroscopy and other biophysical techniques to further understand the enzymology and kinetics of these processes.

Starting in graduate school, I successfully initiated structural studies pertaining to the processes of G protein regulated cell signalling primarily utilizing X-ray crystallography and other biochemical and biophysical techniques, culminating in the first structures of the G protein coupled receptor kinases. In my post-doctoral studies I continued to pursue these structures, solving the first structure of an activated G protein coupled receptor, bovine rhodopsin. As I have moved into my independent career as an assistant professor in the Department of Nutrition and the Center for Proteomics and Bioinformatics, I have continued to build upon this foundation, employing high resolution crystallography, mass spectrometry and computational analysis of GPCR structures to answer questions about the mechanism by which GPCRs pass the activation signal through the plasma membrane and the role that ordered water plays in this process. Additional research interests revolve around the utilization of high resolution crystallography to answer fundamental questions about serine protease hydrolysis and the development of peptide based therapeutics for the treatment of blinding diseases.

In addition to my scientific interests, I am also very involved in graduate education, and serve as the graduate program director for the systems biology and bioinformatics program.

The Lodowski laboratory primarily employs a combination of x-ray crystallography, mass spectrometry and electron microscopy techniques to explore the fundamental mechanisms of signalling and catalysis via protein structure determination.

1. Structural and computational studies of the activation of rhodopsin and other GPCRs to probe the mechanism of GPCR and G protein activation.

G protein coupled receptors are the largest group of cell surface receptors within the human genome and comprise the target of ~30% of all therapeutics used in the clinic. GPCRs play roles in the regulation of heart rate, blood pressure, aspects of metabolism as well as the sensations of sight smell and taste. As a major drug target, the mechanism by which these receptors are activated and inactivated is of great interest. While several structures of activated (agonist-bound) rhodopsin and other GPCRs have been determined, the mechanism by which the agonist-initiated signal propagates through the receptor to initiate nucleotide exchange and consequent activation of Gα subunits is not fully understood.

We have recently determined the highest resolution structure of an activated state opsin (PDB ID:4X1H) determined to date (2.23 Å). In this structure, we observed a continuous polar network of ordered solvent and polar residues which both spans the distance from the chromophore to the G protein binding site and more importantly is not present in the inactive state. This suggests that the establishment of this network plays an integral role in the allosteric mechanism of GPCR activation. This observation has been further borne out by several recent high resolution structures of agonist bound (activated state) structures of ligand activated GPCRs as well. We are also utilizing the combination of mass spectrometry and radiolytic footprinting to  characterize the dynamics of ordered solvent changes within GPCRs and G protein during the activation process.

The conserved catalytic triad formed from serine, histidine and aspartic acid is employed in all forms of life to both hydrolyze bonds or catalyze the addition of varied substrates. It has been estimated that this conserved triad is employed by 30% of all enzymes in the human body, and because of their prevalence and importance these enzymes and their mechanisms of action are amongst the best studied reactions in biochemistry. Despite the level of study and interest in these important enzymes, there are still aspects of catalysis which are not well understood, namely the protonation states of the triad during intermediate catalytic states of the reaction.

Utilizing ultra-high resolution X-ray crystallography as well as neutron crystallography of protein structures which trap catalytic intermediates, we can observe the protonation state changes of both the aspartic acid and histidine. We recently published a 0.83 Å structure of the apo-enzyme state of a bacterial trypsin from streptomyces erythreus (4M7G). We have captured sub-1 Å resolution Michelis-Menten and acyl-enzyme intermediates of this enzyme as well and are in the process of analyzing these structures.