Most of us take our sense of smell for granted. Under the hood, however, it’s an incredibly complex biological phenomenon. Millions of specialized neurons in the human nasal cavity bind to molecules floating in air, setting off a wave of bioelectrical signals that trigger a vast web of circuits in the brain. All this happens in a fraction of a second, letting us sniff out things like cut grass, lemon zest or Grandma’s shampoo. 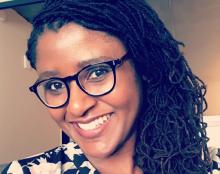 Angela Dixon, assistant professor in the Department of Biology, has recently devoted some of her research efforts to harnessing the power of those neurons, which reside in a specialized region called the “olfactory system.” As an interdisciplinary researcher, she studies the precise ways they work and creates tools to interface them with electronic devices in the lab. Her investigations are paving the way for sensors that can reveal trace amounts of airborne pollutants.

“I just find the olfactory system—and the nervous system in general—so fascinating,” Dixon says. “Most of the research I’ve conducted has involved simulating aspects of the nervous system and building new research models. Some are for basic research—I use them to answer scientific questions. Others are devices we can use as tools to monitor people’s health.”

Dixon, who joined the biology department in January, is the first faculty member to be recruited through Case Western Reserve’s North Star Faculty Opportunity Hires Initiative, which aims to diversify the university’s pool of incoming researchers and professors.

Read the full story in the latest edition of art/sci.