For Asian, Black, and Brown Brothers and Sisters 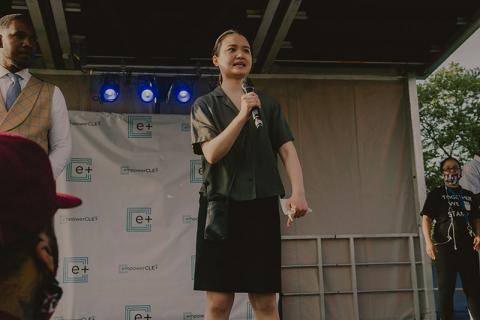 It has been two months since a Minneapolis police officer kneeled on the neck of George Floyd, and it has been four months since Breonna Taylor was killed by police in Louisville. There have been protests every day since to condemn police brutality and demand racial justice. During the June 4th Stand for Solidarity March, Ward 7 Councilman Basheer Jones invited me to speak as a community organizer in the AsiaTown neighborhood. In memory of our brothers and sisters who lost their lives due to police brutality and our role model, Congressman John Lewis, I want to share my speech and my feelings about being a non-citizen Asian in the United States. I hope this article can encourage more of us to think about why people of color should stand in solidarity and what else we can do in our daily lives to promote racial justice. I also wish that we all can acknowledge that racism is not only the result of historical causes but also the ongoing structural racism against individual and collective minority groups.

I came to the United States in 2012 from Henan, China to study Finance and Economics. This stereotypical Asian career path was chosen for me by my parents. After a long, arduous battle, I finally shifted my academic focus to a Master's in Social Work and Nonprofit Organizations at Case Western Reserve University. I graduated in 2019, and today I work at the Community Innovation Network. As part of my role, I do a good deal of community organizing in the AsiaTown neighborhood in Cleveland.

From a young age, the imagery of heroism, justice, a melting pot of cultures, and the elitism of successful white women shaped my perception of the United States by white social media, film, and television works. In mainland China, I've witnessed discrimination and conflicts based on religion, class, gender, and the shade of Asian skin (lighter skin tones are preferred). But the reality of racial discrimination in the United States was an entirely new experience for me. The microaggressions embedded in political correctness, ignorance, and humor all sting equally. When I got my current job offer, a classmate said: "Congratulations, another American has lost his job." When I spoke Chinese with another student, a white woman I once idolized would tell me to speak in a language she could understand.

While many people were friendly and welcoming to me, I still noticed that I had to work harder, often studying and working until midnight, only to reach my American classmates' starting point. I began to see the same was true for my Black friends and classmates - working twice as hard, and often being twice as smart, but yet for some reason still perceived as less. And we all need to work harder to reach the starting line that white Americans are granted at birth. As an Asian in this country, my color is between white and black, and it's hard to know where I stand most of the time. During discussions of racism in class, I felt invisible and vaporized by the experiences of others. And as a non-citizen, a lot of people don't think the structural racism would impact me.

I don't know which feeling is worse: facing xenophobia and racism or being treated as though we didn't exist. As I write this, Asians in the United States and other countries are still being targeted and blamed for COVID-19. We are being called the "Virus". We are mad and scared. We deeply believe in social justice, but justice does not favor us because of our race and color. The resurgence of anti-Asian xenophobia and racism is nothing new. Historically, our Chinatowns in different cities were burned down. Asians were killed with no consequences. We are mad and scared.

A senior couple in AsiaTown who came to Cleveland 20 years ago called me on Monday after reading the news about police violence against peaceful protesters. They said: "We think we lost hope for the American Dream of justice for all. Look at the repeated history. It's such a nightmare. We don't think a real change or resolution will happen before we close our eyes".

Peace and harmony are values embedded deeply in my culture. Many of us would choose to turn inward when we experienced microaggressions, xenophobia, and racism. A white male once told one of my Asian American friends: "You speak English very well. I can't hear your accent." All I could hear is his preconception that my friend was an outsider. In November of 2016, a group of people in MAGA hats threw eggs at my friends and me at Grand Central Station, yelling at us to go back to China. 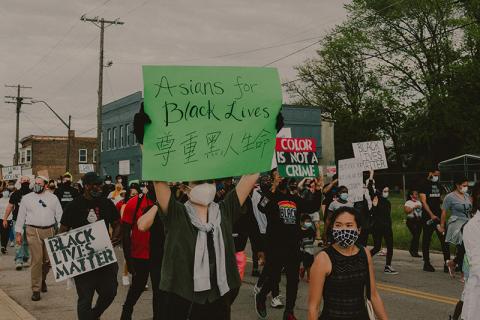 In East Asian culture, Confucius's philosophies are deeply rooted in our education and community. One of them speaks about being in the middle - “don't be too sharp or stand out”. This philosophy is great when it leads to inner balance, but it's damaging when it permits us to remain silent in the face of anti-Asian racism and xenophobia, just sitting there waiting for justice to come. Silence is not how change happens. We need to be sharp to be able to stand up against what doesn't work for us, and continue to make our voices heard. As I look at what is happening to Black and Brown lives today - I come back to the conviction that we must stand up for one another; we must recognize each other's pain; we must validate each other's existence and worth.

I believe Asians (and everyone else) should stand in solidarity with Black and Brown communities, but a hard truth we must face is that we ourselves are part of white supremacy. On May 25 in Minneapolis, an Asian American police officer was standing by as George Floyd died. He is complicit and responsible for what happened to George Floyd. I know so many of my fellow Asians feel deep shame for his role; we feel ashamed for the times that we've been silent. In the white supremacist system, Asians are often called the model minority. We hate it! For many Asians, before or after they came to the States, no one taught them about the history of civil rights. The truth is we've been pitted against each other, and so we don't feel the need to fight for others. We've been brainwashed into the same anti-Black system that continues to allow the murder of Black and Brown people in this country.

The separation between Black, Brown, and Asian communities is a real phenomenon designed by an oppressive system. Believing in this separation only strengthens the white supremacy that negatively impacts all of us. History has ignored us, white supremacy has ignored us, but we must not ignore each other, and we must not ignore each other's pain. We must join together to change the system that oppresses us all. Racism and hate have no place in our community.

My brothers and sisters, despite our differences in how we experience racism and oppression, our rights, our feelings, and our pain is still very real. We must come together to continue the legacy of activists and organizers in our communities who have fought for liberation. We need each other, and we have each other.

And finally, thank you to all the Black activists for taking the lead in combating white supremacy.

“You are a light. You are the light. Never let anyone—any person or any force—dampen, dim or diminish your light.” – John Lewis

We see you, and we love you.