PRINT JOURNALISM. Like many of civilization's amenities, journalism came late to the Cleveland area. The settlement waited more than 20 years for its first newspaper, Andrew Logan's CLEAVELAND GAZETTE & COMMERCIAL REGISTER, founded on 31 July 1818. Although the Gazette lasted less than 2 years, Eber Howe's CLEVELAND HERALD (1819) appeared in the meantime to keep the town supplied with a weekly newspaper. Frontier publishing was not an easy business. Logan had to bring his own hand press and type with him from Beaver, PA. Howe had to manufacture his own ink and make his own deliveries on a circuit extending to Painesville and back. Even paper had to be imported from Pittsburgh until 1823, when a mill was opened in BROOKLYN. Cleveland's third newspaper, David McLean's INDEPENDENT NEWS-LETTER (1828), moved to Warren within 2 years in search of readers. In Cleveland, as elsewhere, this early period of journalism was the era of the partisan press. In return for subsidization by one of the political parties, newspapermen customarily followed the party line and shared in the victory with postmasterships and city printing contracts. Most of the 2 dozen papers attempted in the 36 years after Logan's Gazette were founded on that basis. Six appeared in 1841 alone, of which none lasted more than 2 years, although the EAGLE-EYED NEWS-CATCHER achieved an immortality of sorts by virtue of its name. Editors survived by accepting payment in kind and, reluctant to lose even subscribers who were behind on their payments, continued to send papers until arrears were paid. An agreement signed by Cleveland's 4 papers in 1836 attempted to control competition by establishing standard advertising and subscription rates. 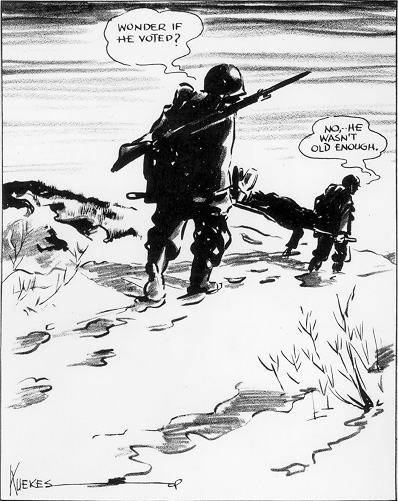 Newspapers shared in the local boom brought by the completion of the Ohio Canal. The Herald became the city's first daily, on 30 May 1835, followed shortly by the CLEVELAND ADVERTISER (est. 1831) and the newly founded CLEVELAND DAILY GAZETTE (1836). Although the Advertiser reverted to a weekly and the Gazette merged into the Herald, they were ultimately replaced by the PLAIN DEALER in 1842 (daily, 1845) and the True Democrat in 1846 (daily, 1847). Specialized papers also made their debuts, including 2 German publications (GERMANIA, 1846, and Waechter am Erie, 1852), a black organ (ALIENED AMERICAN, 1853), and even a high school paper (Central's School Boy, 1848). Competition often descended to the personal level, as when the editor of the Herald sued those of the DAILY TRUE DEMOCRAT for accusing him of plagiarizing the Plain Dealer. Between the Mexican and Civil wars, technological changes improved the city's newsgathering and production potential. A steam press was installed by the Herald in 1845, and the telegraph arrived from Pittsburgh in 1847. By 1854 both the Herald and the Plain Dealer were receiving dispatches over it from the Associated Press. Cleveland's first "star reporter" materialized in the lanky form of humorist CHAS. F. BROWNE, who used the Plain Dealer's local column for the development of his "Artemus Ward" character from 1857-61. With the conversion of the Forest City Democrat into the CLEVELAND LEADER by EDWIN COWLES in 1854, Cleveland journalism entered a 30-year period of stability. Three attempts to found new dailies failed against the dominance of the 3 established dailies. Cowles boldly staked out a radical antislavery position for the Leader, leaving the moderate ground to the Herald and the Democratic cause to the Plain Dealer. The Civil War was fought fiercely but by proxy in the city's papers, as none engaged the services of an exclusive war correspondent.

By the end of the war, the Leader had a clear edge over its rivals. It was the first newspaper in the city to incorporate (1865) and the first to install a perfecting press (1877). In the 1870s, the dailies reduced their pages in size but doubled their number from 4 to 8. The Sunday Morning Voice (see SUNDAY VOICE) was the first to publish on Sunday, in 1871; the Leader and Herald did not follow suit until 1877. The equilibrium on Newspaper Row was finally upset on 2 Nov. 1878, with the appearance of a small, 4-page news sheet named the Penny Press (see CLEVELAND PRESS). Greeted as a joke by the competition, EDWARD WYLLIS SCRIPPS's paper nevertheless had revolutionary implications, combining the concise news formula of his brother's Detroit News with his own sympathy for the underdog. Not only was it the city's first genuinely liberal crusader since the early days of Cowles's Leader, but it was also the first in its era to court Cleveland's growing population of laborers and immigrants with a price of 1 cent. As the Press quickly built up a circulation lead over its rivals, the Herald found itself squeezed out of the race. It was purchased and divided by the Leader and Plain Dealer in 1885. LIBERTY E. HOLDEN, the Plain Dealer's new owner, used his half to break into the morning field. Seen at the time as a concession to the afternoon supremacy of the Press, it was a move that ultimately, if unwittingly, ensured the Plain Dealer's survival as the city's lone newspaper a century later.

Toward the end of the 19th century, stimulated by industrialization and urbanization, the personal journals of the past were converted into organs of mass circulation. While profits were potentially higher, the amount of capital required by a new newspaper had also increased. Newspapers in this period, therefore, came to be regarded as more business than political enterprises. Four Cleveland dailies were attempted in 1889, of which the CLEVELAND WORLD survived to become the local exemplar of "yellow" journalism. A strike and boycott by local printers failed to halt the introduction of the linotype at the Plain Dealer in 1892. Realizing the increased value of their properties, owners began placing them in the hands of professional editors and managers. Scripps, who had left Cleveland in 1880 to found what became the Scripps-Howard chain, left the Press under the capable direction of Robt. Findley Paine. Holden gave complete control over the Plain Dealer to CHAS. E. KENNEDY and ELBERT H. BAKER in 1898. With 6 established dailies publishing in 1900, it was the golden age of Cleveland journalism. By 1905 Press circulation had reached 141,314, while the Plain Dealer (77,856) had finally overtaken the Leader (53,000). Ads disappeared from the front page, replaced by daily editorial cartoons and halftones. Ethnic newspapers proliferated to serve their foreign-speaking constituencies, some on a daily basis. Reporters were losing their anonymity, as the bylines of columnists JOHN “JACK" RAPER and EDWIN MEADE ROBINSON appeared respectively in the Press and Leader, and that of critic ARCHIE BELL in the World.  Ethnic newspapers proliferated to serve their foreign language-speaking constituencies, some on a daily basis.  Several African American papers were started for Cleveland’s growing black population.  Notable were HARRY C. SMITH’s CLEVELAND GAZETTE (1883-1945) and the CLEVELAND CALL & POST, which flourished from 1932-1981 under WILLIAM O. WALKER.

Led by the Plain Dealer in 1896, the dailies began leaving their cramped quarters in the WAREHOUSE DISTRICT to establish a new Newspaper Row along the axis of E. 6th and Rockwell Ave. After the appearance of industrialist CHAS. A. OTIS on the publishing scene, there were fewer to move. Purchasing the Leader and the World, Otis combined the World and the Leader's afternoon edition, the News & Herald, into the CLEVELAND NEWS in 1905. In related moves, he also killed the Evening Plain Dealer and the Sunday World, leaving the city with 2 morning, 2 evening, and 2 Sunday newspapers. Unable to overcome a long decline since the death of Cowles, the Leader left the morning field to the Plain Dealer in 1917. At the price of the Leader, stability returned once more to the Cleveland journalism scene. Elsewhere it was the age of the tabloid, but none appeared in Cleveland. When the CLEVELAND TIMES attempted to challenge the Plain Dealer in the morning (1922-27), it was as a "business man's paper," and it failed. After the death of Holden and the retirement of Baker, the Plain Dealer seemed content to settle into the role of "grey lady," one it often performed with distinction. It acquired radio station WHK in 1934 but, in a secret arrangement made with the Press, refrained from using it to promote the Plain Dealer in exchange for a dependable supply of newsprint from Scripps-Howard. It acquired the News in 1932 but, instead of developing it into a serious competitor with the Press, merely killed its Sunday edition and eventually sold it to the Press in 1960. At the Press, the age of LOUIS B. SELTZER began. Although the liberalism of the Scripps-Howard chain was buried with the founder, Editor Seltzer compensated locally by promoting clean government and community service. The Press called the shots in local politics and was named one of America's 10 best newspapers by TIME magazine in 1964.

A notable generation of writing talent was introduced in Cleveland papers between the wars. It included such names as critic WM. MCDERMOTT and sportswriter GORDON COBBLEDICK at the Plain Dealer and society writer WINSOR FRENCH and columnist HERMAN FETZER at the Press. DAVID DIETZ, science editor at the Press for the entire Scripps-Howard chain, won a shared Pulitzer Prize in 1937, while cartoonist ED KUEKES of the Plain Dealer brought Cleveland its only outright Pulitzer in 1953. Writers at the Press and News formed the nation's first local chapter of the Newspaper Guild in 1933. A new era in journalism was heralded after World War II by the arrival of TELEVISION, which came to Cleveland in 1947. Newspapers were squeezed between this new rival and the increased power of labor unions, which had brought Cleveland its first newspaper strike in 1946. Afternoon dailies became especially vulnerable to a syndrome compounded of suburban lifestyles and the growing impact of television. At first the Press continued its hegemony under Seltzer, opening a new plant on Lakeside Ave. in 1959 and then eliminating the afternoon competition of the News. The tide began to turn in the 1960s, however, as the Press bore the brunt of criticism for the media circus of the SHEPPARD MURDER CASE. It began to lose its circulation lead after the newspaper strike of 1962-63. After Seltzer's retirement in 1966, the Press was generally neglected by Scripps-Howard in favor of its more profitable Cleveland television property, WEWS. When Liberty Holden's great-grandson Thos. Vail took personal charge in 1963, the Plain Dealer showed signs of reviving the crusading tradition in Cleveland. The Holden estate trustees, however, decided to sell the paper to the Newhouse chain in 1967. Thereafter the Plain Dealer exploited its morning advantage over the declining Press. With the closing of the Press in 1982, the Plain Dealer became the lone survivor of Cleveland's journalistic wars. As was the case with local business in general, the city's only daily was no longer locally owned. Under the management of the Newhouse organization, the Plain Dealer seemed to many to be heir to the city's dominant conservative tradition. There were no clear contenders for the locally more sporadic tradition of the liberal crusader.

Although Cleveland had become a "one-newspaper town," it did not lack alternative viewpoints. Besides the television and radio stations, there were numerous suburban weeklies, most of them consolidated into the Times, begun by RICHARD H. SIEGEL where the Edition left off in 1992. SCENE MAGAZINE, a rock music and entertainment weekly, celebrated its 25th anniversary in 1995. Roldo Bartimole's POINT OF VIEW, meanwhile, endured for a quarter of a century as an establishment critic, applauded by one national publication as "an invaluable pain in the neck."