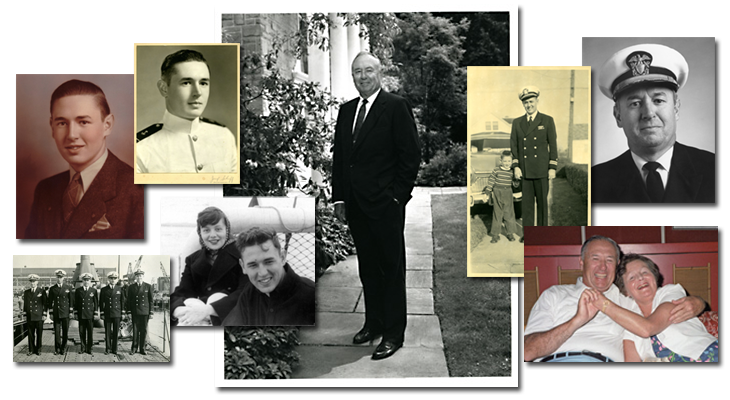 F. Joseph Callahan, the legendary Cleveland-area business leader and philanthropist for whom the university’s Distinguished Lecture is named, died of natural causes Friday, June 28, 2013 in Chagrin Falls. He was 89 years old.

Born in his family home in Lima, Ohio, in 1923, Callahan went on to excel in high school athletics, higher education classrooms, nuclear submarines and, ultimately, manufacturing. He spent 42 years at the greater Cleveland fluid system company known as Swagelok, securing 23 patents there and ultimately becoming its president and then chairman.

In addition to the annual F. Joseph Callahan Distinguished Lecture, the company itself also has ties to Case Western Reserve, including the highly regarded Swagelok Center for Surface Analysis of Materials. One of his sons, Timothy J. Callahan, is a vice chair of the university Board of Trustees and also chairs its Development and University Relations Committee.

“Our hearts go out to the family and friends of F. Joseph Callahan, a visionary leader who ensured that Swagelok held firm to its overarching values even as the pace of its technological advances continues to accelerate,” said Case Western Reserve President Barbara R. Snyder. “He set a standard for insight and creativity that we will continue to seek in every speaker who gives our annual F. Joseph Callahan Distinguished Lecture.”

Throughout his life, Callahan maintained a profound commitment to family, service and generosity to those less fortunate. He also displayed a powerful intellect, a passion for innovation, and overwhelming confidence in the potential of close-knit working groups.

Callahan first demonstrated his gift for leadership when playing football, basketball and baseball al Lima St. Rose School; he frequently served as captain or co-captain of his teams, and then went on to win election as president of his high school senior class.

Callahan spent a year at the University of Dayton before winning a coveted appointment to the United States Naval Academy. He graduated with a Bachelor of Science degree in 1945, and soon after married Mary Elizabeth Krouse, a young woman he had met several years earlier in Lima.

Callahan went on to graduate from submarine school and serve several sub tours, including a stint with future U.S. President Jimmy Carter on the USS K-1. The Navy also twice sent him to the Massachusetts Institute of Technology, first for a bachelor’s degree in electrical engineering and then for a master’s degree in nuclear engineering. Callahan worked for Captain Hyman G. Rickover, often called the “Father of the Nuclear Navy,” and in 1955 he became a project officer on the world’s first nuclear submarine, the USS Nautilus (SSN 571). He helped design two subsequent nuclear submarines, the USS Seawolf (SSN 575) and the USS Skipjack (SSN 585).

By 1957, Callahan had achieved the rank of lieutenant commander. He resigned from active duty that year, but maintained membership in the Naval Reserve for the next 19 years. He began work at Crawford Fitting, a company founded by his wife’s uncle, Fred Lennon. That company went on to become Swagelok, and Callahan contributed significantly to its success. He became president in 1980 and chairman in 1998, and the company grew revenue to $600 million.

At home, Callahan was fiercely devoted to his wife, who suffered from a particularly unstable form of diabetes. He actively monitored her treatment for so-called “brittle diabetes” until her death in 1992 from complications of the disease. She was 66, and they were married for 47 years.

“This lecture series emphasizes the same kind of values of excellence, integrity and respect that my father embodied as an executive and a family man,” Callahan’s son Tim explained. “It represents a fitting legacy for his life.”