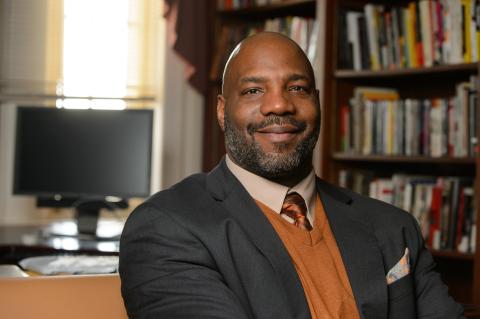 Against the backdrop of a pandemic that disproportionately affects Black people, and a renewed push for racial justice, historian and Peabody Award-winning journalist Jelani Cobb emerges as a clear voice in the fight for a better America. A PBS Frontline correspondent for two critically acclaimed documentaries—Policing the Police and Whose Vote Counts—Cobb explores the enormous complexities of race and inequality, while offering guidance and hope for the future. A long-time writer for The New Yorker, and editor of its recent anthology collectionThe Matter of Black Lives, Cobb’s work is described as having the “rigor and depth of a professional historian with the alertness of a reporter, the liberal passion of an engaged public intellectual and the literary flair of a fine writer.”

Cobb recently co-edited The Matter of Black Lives, a collection of The New Yorker’s most ground-breaking writing on Black history and culture in America, featuring the work of legendary writers like James Baldwin and Toni Morrison. Publishers Weekly writes, “Beyond the stellar prose, what unites these pieces, which range widely in length, tone, and point of view, is James Baldwin’s insight, paraphrased by Jelani Cobb, that ‘the American future is precisely as bright or as dark as our capacity to grapple with [the legacy of racism].’” Cobb also edited and wrote a new introduction for The Kerner Commission—a historic study of American racism and police violence originally published in 1967—helping to contextualize it for a new generation. The condensed version of the report, called The Essential Kerner Commision Report, is described as an “essential resource for understanding what Cobb calls the ‘chronic national predicament’ of racial unrest” (Publishers Weekly).

During a historic election in the midst of a global pandemic, Cobb investigated allegations of voter fraud and disenfranchisement as a PSB Frontline correspondent in the documentary Whose Vote Counts, revealing how these unfounded claims entered the political mainstream. He clearly presents how racial inequities, COVID-19, and voter suppression became interlinked crises, contributing to a long legacy of inequality. For tackling one of the key issues at the heart of modern U.S. politics and carefully elucidating what the fight for voting rights looks like in the 21st century, Whose Vote Counts received a Peabody Award. Cobb was also the correspondent for the Frontline documentary Policing the Police, where he examined whether police reform is a viable solution in the wake of mounting protests calling for racial justice, and explored how we can hold police departments accountable. Previously, Cobb was prominently featured in Ava Duvernay’s 13th, her Oscar-nominated documentary about the current mass incarceration of Black Americans, which traces the subject to its historical origins in the Thirteenth Amendment.

Cobb is the recipient of the  Hillman Prize for opinion and analysis journalism, as well as the Walter Bernstein Award from the Writer’s Guild of America for his investigative work on Policing the Police. He is the author of Substance of Hope: Barack Obama and the Paradox of Progress, and To the Break of Dawn: A Freestyle on the Hip Hop Aesthetic.

For details about booking this speaker, visit The Lavin Agency.

The Martin Luther King Jr. Celebration has featured speakers who keep alive King's spirit and continue his legacy through their work in civil rights, social justice and equality.

Past speakers for the MLK Convocation event include:

A Distinguished Senior Fellow at the inequality-focused think tank Demos, Heather McGhee is a public policy expert who designs and promotes solutions to inequality in America.

Khalil Gibran Muhammad is professor of History, Race and Public Policy at Harvard Kennedy School and the Suzanne Young Murray Professor at the Radcliffe Institute for Advanced Studies. He is the former Director of the Schomburg Center for Research in Black Culture, a division of the New York Public Library and the world’s leading library and archive of global black history.  Muhammad spoke on the theme of "Diversity is Not Enough: How Bias Education Makes Us Smarter, Fairer and Kinder."

LaToya Ruby Frazier is a visual artist and advocate who uses photography to capture and explore local inequality and historical change. Frazier spoke on the theme of "Through the Lens of our Stories: The King Legacy Today."

Nikole Hannah-Jones is a National Magazine Award-winning journalist and 2017 MacArthur Fellow, writing on modern day civil rights for The New York Times Magazine. Her widely read articles on segregated housing and schools, as well as her deeply personal reports on the black experience in America, expose how racial inequality is maintained through official policy. They also offer a compelling case for greater equity.

Writer, researcher, and entrepreneur Margot Lee Shetterly, author of Hidden Figures: The American Dream and the Untold Story of the Black Women Mathematicians Who Helped Win the Space Race. Shetterly is also the founder of the Human Computer Project, a digital archive of the stories of NASA’s African-American “Human Computers” whose work tipped the balance in favor of the United States in WWII, the Cold War, and the Space Race. Shetterly’s father was among the early generation of black NASA engineers and scientists, and she had direct access to NASA executives and the women featured in the book.

Bryan Stevenson is the founder and Executive Director of the Equal Justice Initiative and one of the most acclaimed and respected lawyers in the nation. His memoir, Just Mercy, is the story of a young lawyer fighting injustice on the frontlines. It is an inspiring story of unbreakable humanity in the most desperate circumstances, and a powerful indictment of our broken justice system and the twisted values that allow it to continue. His work on individual cases has generated national attention and his efforts have reversed death penalties for dozens of condemned prisoners. Stevenson’s remarkable twenty-minute TED Talk on the subject of injustice has been viewed over 2.35 million times on the TED website and another 299k times on YouTube; The New Yorker named it one of five essential TED Talks.

Charlayne Hunter-Gault is an award-winning journalist with more than 40 years in the industry, working in every medium. A trailblazer in her own right, she is the author of three books: In My Place, a memoir of the civil rights movement fashioned around her experiences as the first black woman to attend the University of Georgia; New News Out of Africa: Uncovering the African Renaissance; and her latest book is To the Mountaintop: My Journey Through the Civil Rights Movement, a book for high school, college readers and beyond.

Acclaimed Washington Post reporter Wil Haygood had an early hunch that Obama would win the 2008 election and when he did he wanted to publish an article about a black person who had worked in the White House as a servant, someone who had come of age when segregation was so widespread, so embedded in the culture as to make the very thought of a black president inconceivable. He struck gold when he tracked down Eugene Allen, a butler who had served no less than eight presidents, from Harry Truman to Ronald Reagan - and in so doing became a "discreet stage hand who for three decades helped keep the show running in the most important political theatre of all". The result was The Butler: A Witness to History, a portrait of Eugene Allen's lifelong journey, from his birth in 1919 on a southern plantation to his years in service at the White House; it is also a broader examination of the history of African Americans in film. The book, which quickly became a bestseller, was released in tandem with the motion picture Lee Daniels' The Butler —of which Haygood is associate producer—starring Oprah Winfrey, Forest Whitaker, Jane Fonda, Vanessa Redgrave, and Cuba Gooding Jr.

In 1998, Lani Guinier became the first black woman to be appointed to a tenured professorship at Harvard Law School. Before joining the Harvard faculty, she was a tenured professor for 10 years at the University of Pennsylvania Law School. During the 1980s, she headed the voting rights project at the NAACP Legal Defense Fund and served in the Civil Rights Division during the Carter administration as a special assistant to then-Assistant Attorney General Drew S. Days. Guinier came into public attention when she was nominated by President Bill Clinton in 1993 to lead the Civil Rights Division of the Department of Justice only to have her name withdrawn without a confirmation hearing—an experience she turned into a personal and political memoir, Lift Every Voice.

A best-selling author, scholar and cultural commentator, Michael Eric Dyson is University Professor of Sociology at Georgetown University. He is a two-time NAACP Image Award winner and recipient of the American Book Award. Ebony magazine has named him one of the 150 most powerful African Americans.

A celebrated American historian, Nell Painter is the Edwards Professor Emeritus of American History at Princeton University. She is the author of seven books, including the critically acclaimed Sojourner Truth: A Life, A Symbol, and countless articles relating to the history of the American south.

Keith Beauchamp was 10 years old when he first developed an interest in the life and death of Emmett Till. He would later create a film about Till's life, death and the subsequent trial. Determined to play a role in righting this historical wrong it took Beauchamp more than 10 years to complete the film The Untold Story of Emmett Louis Till.

If anyone has "walked the walk" for social justice, it's Case Western Reserve University alumna Joan Southgate (SAS ’54). In 2002 the retired social worker walked 519 miles, following the Underground Railroad from southern Ohio to Lake Erie to honor the arduous and dangerous path to freedom walked by her ancestors.

Fred Gray Sr. (LAW ’54), a Case Western Reserve alumnus and emeritus trustee distinguished himself over the decades as a quiet hero in the civil rights movement. Gray was King's first civil rights lawyer, and his career includes notable civil rights-related cases. He represented Rosa Parks, who refused to give up her seat to a white man on a segregated city bus in Montgomery, Ala. The action led to the Montgomery Bus Boycott, and resulted in city buses being integrated in 1956.

The Three Doctors formed a nonprofit foundation with a mission to inspire and create opportunities through education, mentoring and health awareness. They speak to youths and audiences around the country about their experiences, and are the authors of the book The Pact: Three Young Men Make a Promise and Fulfill a Dream.

Pastor of Cleveland's Olivet Institutional Baptist Church since 1975; active participant in the civil rights movement; national board member and trustee of the MLK Jr. Center for Non Violent Change

Social activist and civil rights and liberties teacher; writer; was involved with King in the civil rights activities in Montgomery, Ala.