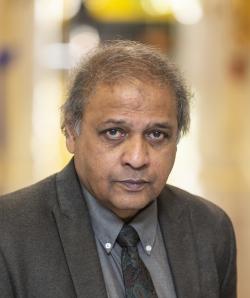 Our research interest is in the development of ultra-stable insulin analogs. Insulin's instability lies in its enhanced susceptibility to chemical degradation and formation of insoluble fibrils (fibrillation). We hypothesize that flexible elements in the secondary structure participate in protein-protein interaction leading to fibrillation. The goal is to dampen flexibility by “stapling” the A-and B-chains of the insulin molecule with peptide tethers of varying lengths to generate single-chain analogs that are ultra-stable, exhibit low mitogenicity and are biologically potent. Another approach is the use of halogenated substitutions like fluorine, in key residues. Fluorous substitutions have been used in drugs such as LipitorTM and ProzacTM to enhance their bioactivities. A long term goal is in its application in programmable implantable insulin pumps to enable peritoneal delivery of insulin in the treatment of Type I Diabetes Mellitus.

Another research interest is directed towards understanding the contribution of kinetic control in transcriptional activation. Protein-directed DNA bending is proposed to regulate assembly of higher-order DNA-multiprotein complexes (“enhanceosomes” and “repressosomes”). SRY, the human male-determining factor encoded by the Y chromosome, is used as a model to decipher the structural mechanisms by which the bent SRY-DNA complex achieves kinetic stability, the relationship to transcriptional activation, and in turn developmental phenotype. Clinical mutations are utilized as probes of general structure-function relationships to evaluate kinetic control of transcriptional regulation.