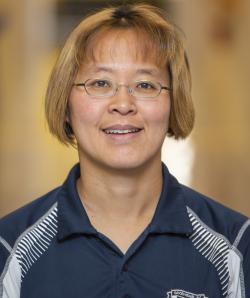 The radical SAM (S-adenosyl-L-methionine) enzyme superfamily was initially described in 2001. The members of this superfamily, numbering in the thousands, catalyze a wide variety of reactions, most of which have not been characterized. The few radical SAM enzymes that have been studied share only two obvious characteristics. 1 - They each contain an unusual iron-sulfur ([4Fe-4S]) cluster in which three ligands to the cluster are cysteine residues from the protein, while the fourth ligand is SAM. These cysteine residues are found in a CXXXCXXC amino acid motif considered to be the hallmark of this superfamily. 2 - They utilize a 5'-deoxyadenosyl (Ado-CH2) radical generated from the homolytic cleavage of SAM to abstract a hydrogen atom from the appropriate substrate. Our lab is interested in the fundamental mechanistic issues surrounding the subfamily of radical SAM enzymes believed to catalyze interesting and difficult methyl transfer reactions required by some organisms for antibiotic biosynthesis. Little is understood about these enzymes, but like many other methyltransferases, they reportedly require methylcobalamin (a derivative of vitamin B12) for activity. Since either SAM or methylcobalamin can function as a methyl transfer agent, we wish to determine whether these proteins require one or both as cofactors (or perhaps substrates) in catalysis. We combine a variety of techniques spanning molecular biology, organic synthesis, nuclear magnetic resonance (NMR) and electron paramagnetic resonance (EPR) spectroscopies, and protein chemistry. These studies will provide further insight into the biological pathways used for antibiotic synthesis, thus facilitating the design of new antibiotic compounds and leading to the improvement of industrial processes used for large-scale antibiotic production.