To encourage innovation and scholarship, the institute has established a Social Justice Fellowship Program that, through grants, funds faculty and student activities that advance social justice work, from humanistic inquiry to action research.

Previous grants have supported proposals that focus on issues that are both local and global. From youth development to elderly care; from political systems to individual recovery efforts, these projects have represented the same diversity as their recipients. The Social Justice Institute is proud to announce the current fellows: 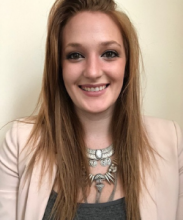 Evicted in Cleveland, Ohio: A Sociology of Displacement & the Role of the Court

Casey Albitz’s doctoral research is focused on formal eviction in Cleveland, Ohio and the relative autonomy of courts within civil forcible entry and detainer actions. Casey will investigate how the Cleveland Municipal Housing Court implements a problem-solving framework and how observed practices reproduce, mitigate, and refute power imbalances between opposing parties. By focusing on formal eviction in Cleveland, Ohio as a relational process, in which powerful players such as court personnel shape both process and resulting outcomes, Casey’s research will shift the gaze of past researchers on this topic from downstream effects and consequences of eviction, back upstream to the actors and processes refuting, mitigating, and reproducing large scale housing instability. 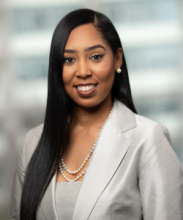 In Cuyahoga County, African American children have a higher prevalence of asthma (23.0%) compared to White children (15.5%). Social determinants of child asthma disparities, such as racial segregation are well documented, however there is a gap in understanding the cumulative effects.

This study will combine traditional qualitative data collection of interviews with geographical data to gain a deeper understanding of the geographic context of adverse health outcomes and social conditions of those living with asthma in Cleveland. The experiences and insights of those impacted will be used to better inform data gathering to find contextually and culturally relevant solutions to reduce child asthma exacerbation disparities. 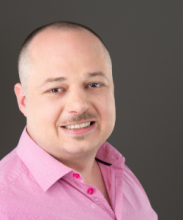 Multiple Ontologies in the Provision of Gender Affirming Care

Daniel's research proposes to use the diagnostic and treatment practice for gender dysphoria, in the Greater Cleveland area to examine the manner in which providers, patients, and healthcare systems construct multiple meanings about the body, sex, and gender and the impact of these multiple ontologies on the provision of care for transgender individuals. The purpose of this project is to explore the ways in which point of care interactions serve as locations for multiple ontologies to come together in the provision of gender affirming care in the United States; how these interactions serve to construct the social and medical narratives of transition; and how care for transgender individuals is influenced by these understandings.

Through exploring transgender experiences in biomedical point of care interactions, this project reveals how those interactions pattern the understanding of being transgender in both individual and community contexts and the iterative impact this has on the provision of gender affirming care across specialties. This project takes an ethnographic lens exploring the ways in which “transgender” is understood between provider and patient across transition related-care and how these understandings influence the sense of what it means to be transgender. 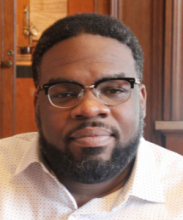 Through his dissertation research Tyrone intends to investigate the prevalence and predictors of decisional conflict (DC) among non-dialysis dependent African Americans over the age of 50 who are diagnosed with advanced chronic kidney disease. Decisional conflict is defined as personal uncertainty about which course of action to take when choice among competing options involves risk, regret, or a challenge to personal life values. 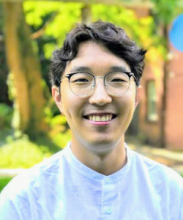 Research shows that the most common reasons cited for bullying by youth include gender, sexual orientation, race/ethnicity, disability, religion, and physical appearance (National Center for Educational Statistics, 2019), suggesting that power imbalance underlying bullying is closely associated with intersections of the social identities of adolescents.

Research shows that boys are more likely than girls to bully others (Hellström & Beckman, 2019), which may root from boys’ desire to align themselves with stereotypical ideas of masculinity and may also police other boys who do not demonstrate the ideal masculinity (Mishna et al., 2020).

Through this research Hyunjune seeks to understand how masculinity affects boys’ bullying behaviors. Hyunjune will study the ways in which masculine identities are formed, achieved and/or challenged among adolescent boys; the impact race, SES and violence exposure may have on the construction of boys' masculinity; and the contribution of masculine identities constructed by boys to their bullying behaviors. 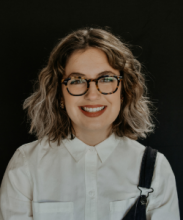 Gabrielle Leskur will work with Our Stories CWRU to use personal narrative and performance art as an avenue for communal reckoning and healing on topics of social justice. The program will be a student-led initiative that invites members of the campus community—including students, alumni, faculty, staff, and community members—to share narratives of identity, challenge, resilience, and hope on topics such as race, gender, sexuality, ethnicity, religion, disability, socioeconomic status, immigration status, mental health, and more through anonymous submissions. The stories will be published in a bound journal and a selection of the submitted stories will be chosen by an advisory group to be brought to life by community members on stage in a public performance in April 2022. The work for Our Stories through the Social Justice Institute Graduate Fellowship is intended to be a pilot program that creates a model student leaders can employ in coming years to form an annual Our Stories event to fit the ever-changing needs and ever-evolving stories of the CWRU community. 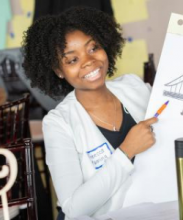 Recent research reveals that more than half of the population has a low level of health literacy. This means most people misinterpret health information, misunderstand prescription labels, face communication barriers, and are less adherent to medical plan regimes. Current health outcomes reflect an abundance of preventable disease states and an increasing number of patients who are not confident in their own care process. Moreover, when trying to grasp the nature of health literacy, it is important to understand that certain groups are more susceptible to poor health outcomes than others. The CDC reports that these groups experience more frequent emergency room visits, longer hospital stays, and higher mortality rates.Through the creation of this advocacy training, Rebecca hopes to improve patient outcomes by ensuring the translation of complex medical plans into layperson language. She intends to do this by educating pre-health students on the connection between disparity and health outcomes of vulnerable populations.The training will be scenario-based and community-focused, pulling from research on the community participatory model and shared appointments. This project aims to bridge the gap between our healthcare system, interdisciplinary research, and vulnerable communities through an in-depth examination of our current communication strategies.

Repeal or Reform: The Promises and Pitfalls of Citizen’s Arrest Laws in the United States

Alexandra seeks to explore the racist historical origins of citizen's arrest laws, their current day use, and the potential for violence prevention in modern day reform proposals. In February of 2020, Ahmaud Arbery, a 25-year-old Black man, was killed while jogging in Glynn County, Georgia. His killers and their prosecutor invoked a Citizen’s Arrest statute as justification for the murder.

A majority of US states have provisions on the books that allow for private persons to make an arrest upon reasonable suspicion that someone has committed a felony, and in some instances, a misdemeanor. In Georgia, for example, GA. CODE §§ 17-4-60 to 62 (2018) enables a private person to effectuate a citizen’s arrest of an alleged perpetrator of any crime. This citizen’s arrest statute has been in existence in some form since 1863 the same year that the emancipation proclamation went into effect. The original Official Code of Georgia Annotated was authored by Thomas Cobb, a lawyer, slave owner, and Confederate States Army officer. Cobb’s racist stances were used to shape the legal code in Georgia. At the time the citizen’s arrest law was codified, the state was seeking to address the growing number of enslaved Africans that were fleeing plantations to join Union forces during the Civil War. The state’s response was to empower civilian whites to take the place of law enforcement in the patrolling of the Black population.
While the majority of US states have some form of citizen’s arrest laws, little research to date has been conducted on the nature of these laws, their content, and their use in modern times. Alexandra's project looks to fill in this gap in the literature by comprehensively analyzing citizen’s arrest statutes and their implementation across the United States. 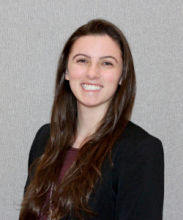 Throughout 2020-2021, Neighborhood Family Practice (NFP), a Federally Qualified Health Center (FQHC) dedicated to providing quality primary healthcare services to a diverse population of Cleveland residents, has observed that the Bhutanese-Nepali refugee population has been, “hit particularly hard by the pandemic” This impact is echoed by local advocacy groups, such as The Bhutanese Community of Greater Cleveland.

For her MPH practicum, Jillian aims to partner with NFP to reach a greater understanding of how the Bhutanese-Nepali community is experiencing the pandemic and navigating the healthcare system. Jillian will conduct In-depth, semi-structured interviews with medical staff, managers and patient advocates for the Nepali community, and Bhutanese-Nepali patients to assess their experience navigating the U.S. healthcare system, their perception of community health needs, and the role COVID-19 has played in their daily lives. 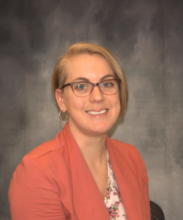 Kimberly Stahler's dissertation research examines social justice activism in Cleveland from 1960 to 1975, and argues that grassroots organizers and activists overcame differences in race, gender, and class in order to forge relationships with imperfect allies out of dedication to their causes.The fellowship funds will cover a research trip to Madison, Wisconsin, and the creation of a story-telling podcast series entitled “Visions of Democracy.”

Kimberly will spend two weeks in Madison, Wisconsin, sifting through the “Enacting the Movement: Performance, Alliance, and the Students for a Democratic Society in Cleveland, 1960 to 1975 archival materials. Kimberly will then make her findings available to the general public through a podcast series. Through this research and podcast series Kimberly hopes to encourage listeners to think critically about allyship and participation in democracy.

Kimberly's work seeks to challenge the argument that identity politics prevent activists from forging alliances and encourages activists to reconsider relationships in social movements and by exposing them to creative ways that Americans have historically participated in democracy.