Continuing Conversations is a project of the Social Justice Institute of Case Western Reserve University. Each online collection focuses on a different cross-section of interviews collected by Community Researchers in the city of East Cleveland. A collection of humanities scholars, including historians, cultural anthropologists, and library scientists, have curated content that interpret questions of what it means to make a meaningful life at a particular moment in time, in specific circumstances. Visit the interactive website on the East Cleveland Public Library's page.

Established as a city in 1911, East Cleveland is the oldest suburb of Cleveland and one of the largest Black communities in the state. The 3.2 square miles of the city are home to approximately 17,000 people. GE's NELA Park—the world’s oldest industrial park—hosts a Christmas light display that has marked the end of the year for residents for eighty-eight years.

East Cleveland residents are proud to support Shaw High School in its academic and extracurricular pursuits, especially the marching band. The Shaw High School Marching Band—which traveled to Beijing to perform at the 2008 Olympics—often performs in competitions around the country and has been featured on the evening news multiple times.  The band was also the subject of Marching Toward Justice: Lessons learned from the Shaw High School Mighty Cardinals Marching Band in East Cleveland by Dr. Misty Luminais and Dr. Rhonda Williams, published in Education, Citizenship and Social Justice (Vol II, 2016).  Read Marching Towards Justice.

The East Cleveland Public Library (ECPL)—established over 100 years ago—is home to the Greg L. Reese Performing Arts Center. The library was recently given a five-star rating in Library Journal, marking the ECPL as one of the top libraries in America. Besides the library and high school, other institutions that shape the community include the Martin Luther King Jr. Civic Center and the East Cleveland Theater. Residents gather for recreation, both spontaneous and organized, at the Forest Hills Park.

Hopes for the Future

With the help of active street clubs and community members' organizing efforts through the Northeast Ohio Alliance for Hope (NOAH), the citizens of East Cleveland are rising to meet the challenges of inequality that confront a city with a high poverty rate and declining infrastructure. Residents’ narratives—as shared with the Voicing and Action Project—belie the negative public perception of the city, instead revealing a rich history and strong community bonds. 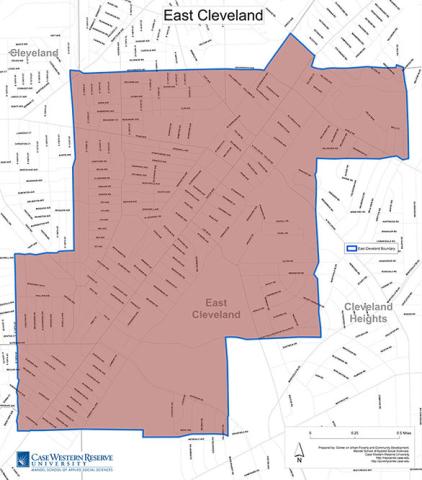 The Voicing and Action Project is about a series of important ideas:

This documentary short was created by filmmaker Risham Waseem.

Voicing and Action Project stories are shared by the CWRU campus newspaper, The Observer.

East Cleveland residents speak with 90.3 WCPN about their dreams for the future.

Listen to Our Feature