Meet the Recipients of
The Alumni Association's 2018 Awards

Donte Gibbs (CWR ‘10, SAS ‘12) is this year’s recipient of the Young Alumni Award, recognizing outstanding alumni under the age of 35 who have demonstrated excellence in their professional field and/or service to their community, the public or humanity. Gibbs, the 2017­-2019 Gund Fellow at the George Gund Foundation, created Donté’s Gift Express, delivering gifts and handwritten cards to East Cleveland homes on Christmas Eve for over three years. Gibbs was named CWRU’s Top Thirty Under 30, named a community leader in Who’s Who in Black Cleveland, and honored as Radio One Cleveland’s Future History Maker. He has served on the board of CWRU’s African American Alumni Association, is secretary for Fairfax Renaissance Development Corporation’s Board of Directors, and is the volunteer coordinator for Manna Food From Heaven, serving meals at local shelters. He also serves on the East Cleveland Civil Service Commission, which reviews police and fire exams and interviews candidates to be employed within the fire and police department.

Takeshi Tottori (GRS ‘82, metallurgy and materials science) will receive the Daniel T. Clancy Alumni Service Award, recognizing outstanding alumni who have been active in alumni affairs for at least 15 years and have made significant contributions to The Alumni Association of CWRU and its programs. Since 1998, Tottori has ensured that CWRU has an alumni presence in Japan, by hosting an annual meeting in Tokyo and founding the Japan Alumni Chapter. As a member of the board of directors of The Alumni Association of CWRU, he has traveled to Cleveland to attend annual meetings, chaired the alumni groups committee and the international alumni ad hoc committee, and served as vice-chair of the chapters, affinity groups, student and young alumni outreach committee.

Janice Eatman-Williams (MNO ‘01) will receive the Newton D. Baker Distinguished Service Award, honoring the legacy of Cleveland's Newton D. Baker, who urged everyone to volunteer their time, talent and service to those in need. For more than 25 years, Eatman-Williams has built connections between CWRU and the Cleveland community by providing youth and families access to academic assistance, life­ skills training and college preparation. Additionally, she has completed certification in Cleveland State University's Neighborhood Leadership Institute and participated in CWRU’s Think Forum: Social Justice, Activism, and Advocacy, SAC's Community Service Committee, and Cleveland State University’s Girls Health Summit. Her civic engagement earned her CWRU’s President’s Award for Distinguished Service, the Community Partner Service Award from the Cleveland Job Corps, and the East Cleveland Public Library’s Volunteer Recognition Award. She also delivered water, food and supplies to the citizens of Flint, Michigan, worked on post-­hurricane restoration projects, and is active with the African American Alumni Association and the Alpha Kappa Alpha Sorority.

Kathy Magliato (MED ‘90) will receive the Professional Achievement Award, recognizing alumni who have achieved exceptional accomplishment in their careers. Magliato is one of the few female cardiothoracic surgeons in the world. She founded and directed a Multidisciplinary Women’s Health Center to address the cardiac needs of female patients at Providence Saint John’s Medical Center in Santa Monica, CA, where she is currently on staff. Prior to joining Saint John’s Medical Center, Dr. Magliato was a heart/lung transplant surgeon and director of the Mechanical Assist Device Program at Cedars-Sinai Medical Center in Los Angeles.

Gina Gibney (WRC ‘79; GRS ‘82, theater) will receive the Distinguished Alumni Award, recognizing alumni who have made outstanding contributions to their profession or field of interest and, over the course of a lifetime, brought benefit to their community and humanity and honor to the university. Gibney is a choreographer, cultural entrepreneur, and the artistic director and chief executive officer of GIBNEY, a New York City organization that uses the transformative power of the arts to catalyze personal and social change.

Richard T. Reminger (ADL ‘53), recipient of the President’s Award for Excellence and a respected lawyer and artist, is the founder and retired chief executive officer of Reminger Co., L.P.A. Founded in 1958, the law firm is headquartered in Cleveland and has 14 offices throughout Ohio, Kentucky and Indiana. Reminger Co., L.P.A. initially focused on the defense of civil matters involving the motor carrier industry, and now includes the defense of civil matters in multiple fields, including professional and medical malpractice. By the 1980s, Reminger Co., L.P.A. became the preeminent transportation and medical malpractice firm in Ohio and was ranked by U.S. News & World Report as one of the top 10 transportation law firms in the nation. When, in the 1970s, traditional insurance companies were reluctant to continue insuring physicians and hospitals, Reminger founded the Cardinal Casualty Company, which still exists today. He was honored with the Cleveland-Marshall College of Law’s Alumnus of the Year Award in 1989.

Additionally, Reminger is an award-winning artist, focusing on landscape and seascape art, along with commissioned portraits. His oil paintings have been invited and juried into over 135 exhibitions in Florida, Illinois, Ohio, Massachusetts, California, Maine, Michigan, Oregon, Connecticut and New York City, as well as Bermuda. In Europe, his work has shown in galleries in Dublin, Ireland, and Truchtlaching (Bavaria), Germany. In 1999, he became the first North American painter to appear in the gallery at Siemens global headquarters in Munich, Germany, an environmentally friendly and inspiring work environment that is also accessible to the public. He is an elected member of the Oil Painters of America and the Salmagundi Club of New York City and a signature member of the International Society of Marine Painters.

CWRU has your ticket to fun this fall!

The mission of our chapters is to bring CWRU alumni in China together in support of Case Western Reserve University. We will host networking and social events, cultural salons and faculty activities that connect alumni, students, parents and faculty members. Also, we will work with CWRU to coordinate new student welcomes each year. 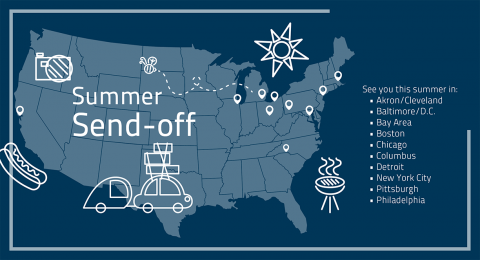 Check out pictures from all 2018 Summer Send-offs on Facebook

We're Going Back to School -
Fall Convocation is on August 29

Join us for Fall Convocation on Wednesday, August 29, 2018, at 4:45 p.m. at Severance Hall as we launch the new academic year, celebrate the newest Distinguished University Professors, and hear Sarah Kay discuss and perform poetry as the 2018 Elaine G. Hadden Distinguished Visiting Author and keynote speaker.

Sarah Kay is a poet, performer and educator who uses the power of spoken word to inspire creativity and self-empowerment in others. Kay is the founder and co-director of Project VOICE, an organization that uses spoken word poetry as a literacy and empowerment tool. She is the author of four bestselling books of poetry.

Chosen as Case Western Reserve University’s 2018 common reading, No Matter the Wreckage is Sarah Kay’s debut collection of poetry featuring work from the first decade of her career. No Matter the Wreckage presents readers with work that showcases Kay’s knack for celebrating family, love, travel, history and unlikely love affairs between inanimate objects (“Toothbrush to the Bicycle Tire”), among other curious topics. Her performance on the TED stage garnered over 11 million views and is worth watching.

Immediately following the convocation, a complimentary reception and book signing will be held in the Tinkham Veale University Center Ballroom.

The event is free and open to all. Online registration requested: case.edu/events/featured-events/fall-convocation/event-details

Join the Inamori International Center for Ethics and Excellence at Case Western Reserve University September 13 and 14 as we present the 2018 Inamori Ethics Prize to Dr. Farouk El-Baz. This celebration includes the ceremony and recipient lecture on September 13 and the academic symposium, “Ethical Leadership: Science Serving Humanity,” featuring the prize recipient and a distinguished panel, on Friday, September 14. Both events are free and open to the public.

El-Baz, a NASA scientist on the Apollo space program’s site-selection committee, was part of the team of NASA scientists responsible for choosing the first lunar landing site. He also created and still directs a NASA-recognized “Center of Excellence,” the Center for Remote Sensing at Boston University. The center uses space technology to study the earth and its environment, including finding critically needed groundwater in arid regions around the globe.

During the ceremony, El-Baz will deliver a public lecture about the focus of his research and the challenges ahead.

SOTC, founded in 2003, is an economic development initiative that works with area alumni to attract talented young people to Greater Cleveland. To date, the program has attracted more than 160 college graduates to Northeast Ohio for jobs or graduate school.

We would especially like to thank our alumni volunteers who helped with the summer's programming and events.

Learn more about Summer on the Cuyahoga

What a Day of Giving It Was! 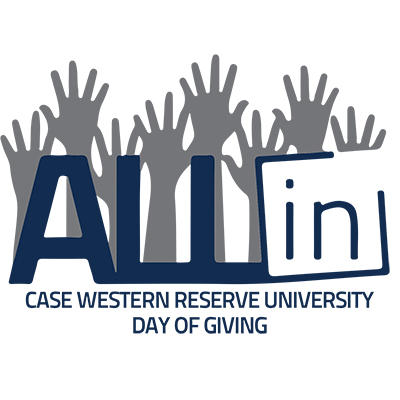 On June 12, CWRU held its sixth annual ALL [in] Day of Giving and the response this year exceeded all expectations!

2,609 donors combined for over $1.55 million in support, with alumni comprising 46 percent of the donors. Additionally, 929 donors (over 35 percent of donors) made their first-ever gift to the university.

Every donor (no matter what the donation amount) makes a difference to CWRU’s national ranking. Donations support our students and improve the value of your own degree.

Thank you! You truly can create change at CWRU!

Find a CWRU Fund That Appeals to You