PARKS. Not until the 1870s were public funds allocated to establish parks. Cleveland in its early years was surrounded by wilderness, and city leaders saw no urgency to secure parkland beyond the 10-acre PUBLIC SQUARE set aside as early as 1796. By the time they awakened to the need for public open space, areas near the center of the city had long since been appropriated to other uses, and the city was unable to establish parks convenient to the crowded neighborhoods that most needed them. In Sept. 1865 a city council committee was appointed to consider the establishment of public parks. The committee reported that Cleveland was "far behind most cities of its class" and urged the purchase of parkland to accommodate the city's "great future population." In 1871, by authority of a new state law, the city's first Board of Park Commissioners was created. The following year, park commissioners Azariah Everett, O. H. Childs, and John H. Sargent reported that they had spent almost $29,000, principally on improvements to Monumental Park (as Public Square was then known) and FRANKLIN CIRCLE. In 1874 the first park bond issues were sold to finance the purchase and improvement of Lake View Park. Other public parks established by 1880 included MILES, CLIFTON, and Pelton (see LINCOLN) parks—all relatively small parcels. 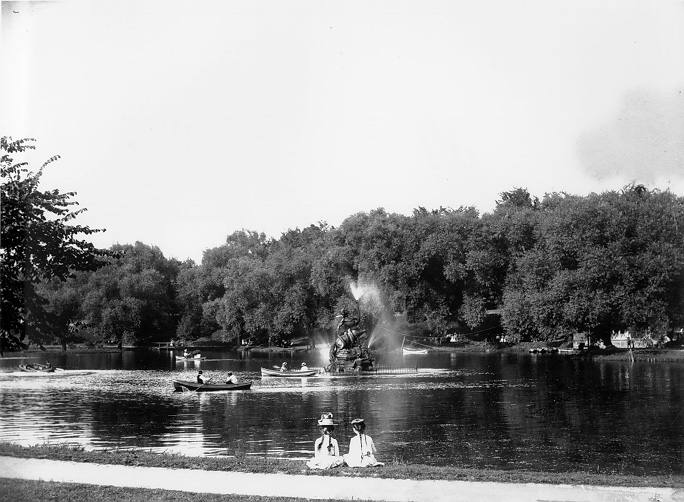 JEPTHA H. WADE's gift of 64 wooded acres in 1882 formed the first large park area in the city (see WADE PARK). In 1890 park commissioners reported that, in the development of parks, Cleveland stood "at the foot of the list" of cities in the U.S. having populations greater than 200,000. New York, Boston, Philadelphia, Chicago, Baltimore, Detroit, and Buffalo all had established well-planned park systems that had already resulted in "very material benefits." The park commissioners were "convinced beyond doubt" that public parks had "passed beyond the domain of luxuries" and cautioned that Cleveland's excellent natural park sites—among them the Doan Brook Valley, the lakeshore on the west side, and the Big Creek Valley south of Brooklyn Village—should be acquired before development encroached on them and put their purchase out of reach. Upon his death in 1892, WM. J. GORDON bequeathed to the city some 129 acres, already handsomely improved with winding drives and wooded groves. GORDON PARK answered part of the city's need for parklands, but it also underscored the need for a comparable park on the west side.

In 1893 the state legislature passed a park act granting park boards expanded authority to appropriate parkland and issue bonds. Cleveland appointed a new board of 5 commissioners "to provide for the Forest City a system of parks commensurate with her size and importance." The new board—consisting of Chas. H. Bulkley, AMOS TOWNSEND, John F. Pankhurst, Mayor ROBT. BLEE, and City Council President A. J. Michael (soon succeeded by Chas. A. Davidson)—adopted the first general plan for park development in Cleveland and presided over the system's most critical decade. The plan's principal feature was the location of a large park on the outskirts of the city in each of 7 main sections. These would be connected by broad paved boulevards encircling the city. The board hired Boston landscape architect Ernest W. Bowditch to carry out the plan and issued $800,000 in bonds.

Acquisition of parkland accelerated dramatically. In 1894 the city purchased a large portion of the Doan Brook Valley between Gordon and Wade parks, the first 89 acres of EDGEWATER PARK, and 81 acres of Brooklyn Park (later BROOKSIDE PARK). The same year, park commissioners decided on 3 farms located between Turney Rd. and Broadway as the site for a south side park (see GARFIELD PARK). In 1895 the Shaker Hts. Land Co. donated 279 acres embracing the upper Doan Brook Valley and the SHAKER LAKES. At the city's centennial celebration the following year, JOHN D. ROCKEFELLER announced his gift of 276 acres along DOAN BROOK and $300,000 to cover the cost of land the city had previously acquired there. Rockefeller's gift completed the city's ownership of the entire Doan Brook Valley from the headwaters to Lake Erie. Other substantial additions to the park system during this period included the 86-acre WASHINGTON PARK in 1899 and the 100-acre Woodland Hills Park (LUKE EASTER PARK) in 1900. The first parks in Cleveland, as elsewhere in the nation's cities during this period, were envisioned as passive "public pleasure grounds." Cleveland's park commissioners set out to create, in their own words, "a harmonious development of sylvan beauty to which all are welcome, rich and poor alike, where all may find rest and inspiration and pleasure." Photographs show that they were indeed beautiful and, prior to World War I, they were by far the most popular subject for penny postcards.

Cleveland's park board faced serious opposition in the late 1890s. The Park Board Reorganization Assn., led by attorneys John A. Smith and JOHN ZANGERLE, charged that the board was "autocratic, dictatorial, irresponsible and unaccountable to the people." By establishing parks in SHAKER HTS., NEWBURGH, and BROOKLYN, the association charged, the board made them convenient for "people of leisure" but inaccessible to city residents who could not enjoy them without "the expense of transportation and considerable cost of time." The association further charged that city residents were paying to enhance the property values of adjoining townships. After a sometimes bitter battle in the state legislature, the park board was abolished in 1900, and administration of the city's parks was vested in the new Div. of Parks & Boulevards of the Dept. of Public Works (later the Dept. of Parks, Recreation & Properties).

By 1896 Cleveland had laid the foundation for a park system that park commissioners claimed was "excelled by few [cities], if any, in the world." Within a comparatively brief period, some 1,200 acres had been assembled and improved. Fully two-thirds of the land had been donated, leaving the city to pay only the expenses of improvement and maintenance. But therein lay the problem that would plague the city's parks almost from the moment they were added to the system: bond funds could be used only for the purchase and permanent improvement of parkland, while maintenance costs had to come from taxes. The city increasingly found that it lacked the resources to maintain what it had built. As early as 1901, parks superintendent Robt. J. Kegg cautioned in his annual report, "You must bear in mind . . . that every bit of new work added means greater maintenance expense the next year. . . . A proper appropriation should be set aside to take care of them, or they will soon deteriorate."

The Cleveland parks entered a new era under Mayor TOM L. JOHNSON, who initiated an effort to "bring the parks to the people." He ordered the removal of "Keep Off the Grass" signs, and during 1901, his first year in office, set as a goal the establishment of playgrounds in the more crowded districts of the city. The impetus for building playgrounds in Cleveland mirrored the situation in other large industrial cities, where park-reform advocates argued for the location of new parks on sites more accessible to the working classes and for organized sports and other activities that would ensure healthful recreation. Thus, during the early 1900s, the city's Div. of Parks equipped new children's playgrounds, constructed athletic fields and basketball and tennis courts, and introduced Sunday and evening band concerts. Winter sports, especially ice skating, had gained in popularity, and in 1901 the city established skating rinks at all the larger parks and hosted skating races at Brookside and Rockefeller parks. Park shelters at Edgewater and Woodland Hills parks were converted for use as municipal dancing pavilions. By 1904 8 children's playgrounds were operating in the more congested areas of the city, and the Div. of Parks had embarked on construction of the first of 5 free public BATH HOUSES. In 1916 with 2,160 acres of parkland, Cleveland ranked 12th nationally in park area.

By the 1920s, Cleveland's parks had begun to show the effects of intensive use and inadequate maintenance. The Community Betterment Council of the Welfare Federation undertook a study of the problem and issued its report in 1923. "Cleveland's parks have required, and should have received better care and upkeep than has been given them," the council reported. According to the council, the city had recently cut 800 men from the payroll and had eliminated the positions of city forester and park engineer. Park buildings, the council charged, had been painted a garish orange and black to advertise work done by Mayor FRED KOHLER's administration, and the city was losing to disease an estimated 4,000 trees a year. Meanwhile, a separate suburban park system had been carved out of the city's picturesque outlying districts, embracing some of Greater Cleveland's finest natural areas. As early as 1905, Cleveland park engineer WM. A. STINCHCOMB had urged that the city take advantage of its outstanding natural areas by creating an outer system of parks and boulevards to encircle the entire metropolitan area. The independent Cleveland Metropolitan Park District was created in 1917. Similar metropolitan systems already had been established in Boston, Westchester County, NY, and Cook County, IL. CLEVELAND METROPARKS, as the metropolitan park district is known today, comprises 13 reservations in Cuyahoga and Medina counties, most of which are located outside the city limits.

In many respects, the Depression may be said to have come to the rescue of the city's parks. With aid from the WORK PROJECTS ADMINISTRATION, the parks were extensively rehabilitated and redesigned to accommodate automobiles and better withstand intensive use. In 1938 a force of nearly 9,000 men, divided into 2 shifts, worked 6 days a week building dams, bridges, culverts, bath houses, swimming pools, athletic fields, tennis courts, and playgrounds, and planting trees and shrubs. After 1940 the city's parks suffered from serious outbreaks of vandalism and theft, water pollution, and perpetually inadequate maintenance and security. Highway construction decimated large portions of Edgewater, Gordon, and Brookside parks. The parks department traditionally received the crumbs from the city's budget, and as the budget grew leaner in the 1960s, park personnel were continually reduced. The parks, once one of Cleveland's finest assets, were reduced to a deplorable condition. Mayor Ralph Perk's attempt in 1972 to address the situation with "Operation Turn Around" was ineffective, as was a $500,000 federal Comprehensive Employment and Training Act (CETA) program in 1975. No longer able to manage its extensive park system, the city looked to other government agencies for help. In 1977 the city negotiated a long-term lease with the Ohio Department of Natural Resources making Edgewater, Gordon, and Wildwood parks part of a new CLEVELAND LAKEFRONT STATE PARK. Ten years later, EUCLID BEACH PARK, a popular amusement park closed in 1969, was added to the lakefront chain. Under the state's management, these waterfront parks have seen extensive capital improvements, as well as improved maintenance and security. In 1986 Cleveland Metroparks agreed to lease and operate the 180-acre Garfield Park for $1 a year for 99 years; the agreement followed bitter and long-standing complaints by the city of GARFIELD HTS. that Cleveland had failed to maintain the park and that it had become an eyesore and a haven for derelicts. In 1993, in a similar deal, Cleveland relinquished control of 135-acre Brookside Park to Cleveland Metroparks. The lease required Metroparks to make substantial capital improvements by 1 July 1996, and permitted the park district to use a portion of it for expansion of the zoo. With few exceptions, Cleveland's parks bear witness to the great shift of the city's population in the last 4 decades. With the flight of the middle class to the suburbs, the city's poor and working-class residents have inherited a greatly diminished park system that continues to suffer from inadequate maintenance.